Published on October 29, 2009 by Charles Digges 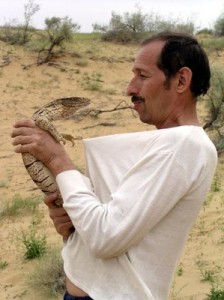 The activist, Andrei Zatoka, was sentenced to five years in prison today for assault during a closed hearing in the city of Dashoguz in Northern Turkmenistan. The verdict was immediately deplored by international rights watchdogs.

"These charges seem unfounded and the trial was patently unfair," said Rachel Denber of the Europe and Central Asia division at Human Rights Watch in a statement to reporters.

“Zatoka should be released immediately, and there should be an independent investigation into the incident,” she said.

Zatoka, a Russian citizen who has been living for several years in Turkmenistan, is an internationally renowned environmental activist who has been campaigning on ecological issues in the country, formerly part of the Soviet Union.

Despite his Russian citizenship, the Russian Foreign Ministry has kept well out of the way of Turkmenistan authorities, Zatoka’s colleagues told Bellona Web.

Zatoka’s environmental activities
Zatoka established an environmental protection group in the early 1990s but it was shut down by the authorities in 2003. Zatoka, however, continued his environmental campaigning even after his group’s co-founder left the country.

"The Turkmen authorities tolerate no dissent," said Farid Tukhbatulin, the co-founder of the group who now heads the Turkmen Initiative for Human Rights in Vienna.

"This is a message to a handful of other activists who are brave enough to work in Turkmenistan," Tukhbatulin told the BBC.

Gas brings heat for environmentalists
Natural gas-rich Turkmenistan is among the most repressive states in Central Asia and it guards those gas interests with a heavy hand.

Though Zatoka studies amphibians and reptiles, he still falls into the category of environmentalists who are threatening Turkmenistan’s gas markets, say human rights watchdogs.

Over the past several years, some of the biggest customers of Turkmenistan’s gas, like the European Union and the United States, have made oblique references to ending their purchases unless Turkmenistan cleans up its human rights record.

As Turkmenistan’s gas is shipped out to customers using Russian pipelines, Russia also stands to lose a tidy buck if these consumers boycott Turkemen gas supplies.

President Kurbanguly Berdymukhamedov came to power in 2007 promising to open up his country and introduce reforms after years of isolation under Turkmenistan’s previous ruler, President Saparmurat Niyazov.

But critics say few genuine reforms have taken place and the restrictions on basic freedoms continue.

“The case of Andrei Zatoka is clear confirmation that human rights do not exist in Turkmenistan. Zatoka is innocent and this harassment must be stopped immediately. Green groups are starting campaigns aimed at achieving Zatoka’s release as soon as possible,” wrote Vladimir Slivyak, co-chair of Russia’s Ecodefence, in an email interview with Bellona Web.

“This case is a shame for Russian Ministry of Foreign Affairs which distanced itself from the case and does not protect Russian citizens (abroad). It looks like Russian officials
thinks they exchange Zatoka for natural gas flowing from Turkmenistan,” Slivyak added.

The Russia Foreign Ministry was similarly unhelpful to Ecodefence physicist Andrei Ozharovsky, a Russian citizen, who was arrested in Belarus during a public hearing earlier this month on the Belarus Nuclear Power Plant slated for construction in the Grodno Region.

Ozharovsky was sentenced to seven days in jail for disturbing the peace, with which he was charged for distributing a report he authored with other Russia and Belarusian physicists on the Belarus Nuclear Power Plant.

Someone who answered the phone at the Russian Foreign Ministry’s press office, who would not give her name, refused to comment on the Zatoka case.

Both arrests are part of a growing trend in former Soviet Republics that have something to offer Russia.

In Ozharovsky’s case, Russia’s state nuclear corporation Rosatom was apparently able to presssure Belarusian authorities to pluck Ozharovsky out of the public hearings on a plant the corporation is counting on as a cash cow and jail him on similarly preposterous charges.

Causing a ruckus about the flow of cheap natural gas from Russia’s totalitarian neighbour also seems to strike close to the heart of Gazprom, Russia’s gas monopoly, which supplies most of Europe with natural gas, and which over the past decade gained the status of a state within a state with ties to banks, media and other enormous enterprises that bow to its wishes.

His colleagues and rights groups have said the altercation was staged.

When Zatoka tried to get away from his attacker and turned to two police officers nearby to report the incident, the policemen proceeded to arrest Zatoka. He had apparently never met the man who struck him and had absolutely no reason to engage in an altercation with him, Memorial activists reported to Human Rights Watch.

Zatoka himself wrote an open letter to the Turkmenistan Prosecutor General that he requested rights groups to release in the event of his disappearance or detention by authorities that Human Rights Watch published in English on its site today.

Zatoka’s recounting of harassment and surveillance in his open letter dates back to 2006, and is vivid and meticulously detailed, including the date he was informed he was no longer allowed to leave the country, dates on which his apartment was broken into and ransacked, and even license plate numbers of vehicles he suspected were following him.

The Trial
Acording to information that was relayed to various human rights groups, the hearing today in Dashoguz Municipal Court was fewer than the three working days after Zatoka’s indictment required under Turkmen criminal procedure.

The trial judge rejected a defence motion to postpone the hearing until November 4th.

According to persons close to the case, the judge also rejected without explanation a defence motion to summon defence witnesses. Zatoka says he will appeal the verdict, which could snowball into a large international campaign.

"Zatoka has been under pressure for years and knew that an effort to have him silenced was coming,” Human Rights Watch’s Denber told reporters.

“The pressure on him and the government’s overall intolerance of independent activism strongly indicate that the charges against Zatoka are politically motivated," she said.