MURMANSK – Shtokman Development, the consortium leading the tapping of the enormous Shtokman oil and gas condensate field, presented potential suppliers with requirements and procedures for tenders the upcoming tenders to select partners in the first stages of work and delivery at a seminar here.

Published on April 22, 2009 by Anna Kireeva, translated by Charles Digges 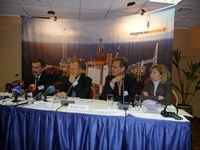 The seminar last week was closed to the press and to environmentalists. Shtokman Development AG is a three part consortium made up of Russian gas giant Gazprom, France’s Total and Norway’s StatoilHydro.

Yury Komarov, executive director of the Shtokman Development said the seminar focused on a large volume of engineering work and on proceeding with the tenders.

“We have a long road ahead of us in order to accumulate experience for work in the sea,” he said, underscoring that Gazprom only has experience in gas drilling on land.

Closed seminar
Ecological organizations were refused participation in the seminar “because of a lack of space in the meeting hall” and the press was only allowed in for a seven-minute photo op, which proceeded in complete silence and without comment from the participants. Nevertheless, Komarov assured environmental groups and the media at a press conference that “there are be no limits in preordained activities for participation in such processed, nor will there be.”

“We will continue meetings with environmentalists because the company is conducting a responsible policy of environmental safety,” he said. A state environmental impact study of the project is planned before the end of the year, as well as public hearings. Komarov said that, as per obligation, regional environmental organisations will be invited.

“Of course, it is good that the company has initiated regular meetings with public organisations, but it is important to discuss the project in the presence of all interested parties – this is the real indicator of the transparency of the company,” said Nina Leskhina, energy projects coordinator for Bellona Murmansk.

Project deadlines
The gas condensate plant planned for construction in the Murmansk Region village of Teriberka –  expected to be one of the largest such plants in the world – is slated to be built by 2014. It will produce some 7.5 million tones of gas condensate per year, and will require some 11 billion cubic meters for its production.

Demands to contractors
Murmansk Region governor Dmitry Dmitrenko recently announced that all enterprises dealing with developing the Shtokman field must be registered in the region so that taxed can be collected locally. But Shtokman Development has doubts about this issue.

The company itself is registered in Switzerland, but its Teriberka branch will be a regional tax resident. Therefore, whether equipment suppliers and contractors on the project will register in the region has become a complicated issue.

Shtokman Development representatives have said that priority in developing the first stages of the project will be given to Russian companies – on the condition that Russian companies not yield to their foreign counterparts. And this issue will be settled by tenders.

Contractors will be presented with lofty demands which will by stipulated by the complexity and climactic characteristics of the project. “We hope that industry in the Murmansk Region will be maximally involved,” said Komarov. “A large number of enterprises will be filling orders.”

Bellona Murmansk’s Lesikhina said that realizing a “unique” Shtokman project should assume the introduction of the most state-of-the-art, “unique” and frequently expensive technology, as the significance and vulnerability of the Arctic is so great that issues of environmental safety should not be addressed on the cheap.

“We can only guess if these questions were discussed at the seminar. Bellona was unfortunately able to ask these questions only after the press conference, but ‘because of the time constraints of the company’s representatives,’ we did not receive any comprehensible answers,” said Lesikhina.

Of most importance to Bellona is whether technology to capture and store carbon dioxide (CCS) will be introduced into the workings of the project.

Stabilizing climate change requires a 50 to 85 percent reduction in global CO2 emissions by 2050. This can only be achieved by improving energy efficiency, the use of renewable energy, and the introduction of CCS technologies. StatoilHydro’s unfortunate experience in 2008, which released 1.3 million tons of carbon dioxide into the atmosphere underscores the seriousness of the problem and the necessity of detailed discussion with representatives of all sides of the issue.