My brother recently came to visit from Vladivostok. Naturally, among other things, we started talking about the everyday problems of the city where he liveswhere I myself lived for a good 20 years. It turns out, the citys problems remain just where they have always been. In fact, they are the same as 20 years ago: for instance, regular shut-offs of cold and hot water. 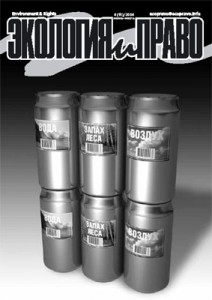 I have frequently asked both civilian and military officials: How come Vladivostok is such a squalid, miserable city? Why is it that in the 144 years since it was founded no purification facilities have been built and no normal water supply system put into shape? The answers have always wound up leading to one conclusion: because the city is constantly under the rule of fly-by-nighters. They came, they stole what they could, they left. Other fly-by-nighters came to take their place.


Broadly speaking, this prescription for governanceyou come, you steal, you leaveis characteristic of Russia in general. All those colossal Soviet-era projects of reversing the flow of the Volgaand now, building an international nuclear waste repository in the countryare baked by the same old recipe. Why wouldnt such a drive-through official in the Russian government doodle his name under the repository project if he knows for a fact that his twilight years, and the lives of his children and grandchildren, will be spent on the shores of the Mediterranean? A fly-by-nighter does not have to be a professionalit is quite enough for him to have at least a superficial idea of what he is dealing with. A fly-by-nighter, as a rule, does not have to account for anythingneither by his salary, nor by his freedom, nor by the riches he has amassed. A fly-by-nighter knows he is guaranteed impunity.


In fact, fly-by-nighters of our days have their comfortable living ensured by their very own guarantorthe countrys president, who has chosen his drive-through officials by his own standards known to him only.


Let me give you a concrete example. Not so long ago, Russian Prime Minister Mikhail Fradkov said officially that he likes the idea of possible construction on the territory of our country of an international nuclear waste repository. For all we know, to Fradkovs knowledge, radioactivity may as well be the sprightly chirping of DJs on the FM-receiver on his way to workbut he sure does like the idea! That means somebody had to put this idea into his ear. Somebody had to make certain that Fradkov liked this idea.


But Alexei Yablokov, president of the Russian Center for Ecological Policy, does not like this idea. Because he is an academician and because he, most likely, knows the subject a little better than the prime minister But also, apparently, because he does not have the mentality of a fly-by-nighter. And thank God, we still have a lot of people like him. Although the level of their influence on the decisions made by those at the helm of the country is decreasing day by day. Thats because todays fly-by-nighters are not just illiterate, theyre plain aggressive.


Environmentalists warned: Russia would only lose from the import of radioactive waste. There is no international market for reprocessing and storage of spent nuclear fuel, they said, nor are there any economic gains to be had from importing it Four years have passed. Since then, three laws have been amended, a presidential decree issued, a specially created commission convened and adjourned Not a kopeck has dropped into the state coffers from this whole nuclear waste import project. Because the very project was about the politics and the bottom line to begin with, slapped together by fly-by-nighters.


Look at other projects of our drive-through rulersthey are just as rotten to the core as the SNF imports. Take, for instance, the abolition of social benefits and exemptions and their replacement by cash equivalents. They are persuading people that they, the poor benighted people, will certainly, sometime in a few years, appreciate the full depth of the touching care that the dear party and motherland is providing to them, the poor benighted people. And will say Thank you.


And what if they wont? What if therell be nobody to say a thank you to? Dont expect a fly-by-nighter to stay and wait for a thank you from who was that again? Oh yes, the people. Après nous, le déluge! has been in the dictionary of fly-by-nighters for centuries. The tenacious creed for a pertinacious breed.


I am amused by the naiveté of our people, who entrust themselves, again and again, to the hands of avaricious fly-by-nighters. Coveting power, fly-by-nighters will promise candy mountains, rivers of milk and lands of honey. Grabbing the power theyve craved for, they will instantly forget everything but lining their own pockets. In this respect, Vladivostoks experience is quite telling: Every candidate for the post of the head of the citys administration vows to build purification facilities and upgrade the cold and hot water supply system. This will be the 21st year that Ive been witnessing this marathon of pledges, but its always hot airand never hot water.


The remarkable thing about all this is that a fly-by-nighter is easily spotted, and does not have to be elected, much less re-elected. But such, it seems, is the Russians nature: They believe in magic and they believe magicians. Its just that sooner or later, it turns out that the Wizard of Oz has already left for greener pastures, and those who stood with their mouths agape waiting for the magic tricks will have to laugh on the wrong side of those mouths. Having little left than their own straw brains to blame.