He is back. Actually, he never really left. Seems like hejust like his Company­has always been there. So then, the main question is: What if hell stay for good? Committee-2008 has been openly pondering this question. True, one cant see any even slightly noticeable or effective actions from that, but we still have a little time before his next election comes around. 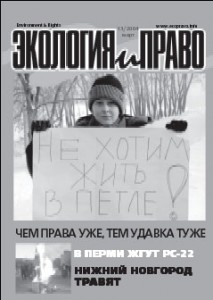 We’re told: “Why are you poking your noses into politics, picking on Putin like that?” Well, we’re not picking on him. To tell you the truth, he’s not particularly interesting to us. What we’re talking about is the issue of a person’s suitability for the post he occupies. And in doing so, we’re looking at it through our own—environmental—lens. We’re not hashing out other fields of life that he has ruined—not yet. Anyway, let’s look at the Internet, see what is said about “the nation’s sweetheart elect” by environmentalists.

Here is the opinion of Vladimir Boreiko: “In my view, to the just arguments that Putin is turning Russia into a police state, trampling on its democracy and the freedom of press, flouting human rights etc., one has to add the environmental argument, as well:

1. Putin eradicated state protection of the environment.
2. He destroyed the state forestry structure.
3. He signed the anti-environmental and anti-humane law on import and reprocessing of foreign nuclear waste.
4. He signed the anti-environmental amendments to the Forestry Code.
5. He did not sign the Kyoto Protocol.
6. He did not sign the law prohibiting cruelty to animals.
7. To the best of my knowledge, no new nature reserve or national park was created during his term.
8. During Putin’s term, funds for environmental protection were decreased.
9. During Putin’s term, the FSB started to aggressively persecute environmentalists.”

Here is another opinion, that of Askhat Kayumov: “Of course, it’s the misfortune of the country that its people choose without thinking. Because, if you think about it, you will have to answer this very question—what good did he do? For whom has it changed for the better, and how? … And few will consider that one of Putin’s achievements was that in the four years of his presidency, he has brought the war from the Caucasus to Moscow. And this concerns not only the “nutty” and the “few-and-far-between” environmentalists, it concerns everyone.

And there was a voice. A lonely voice, coming from, I think, Sergei Pashchenko. Saying that we shouldn’t really criticize “the nation’s elect,” but juxtapose our own, specific actions to his policies and his throng of lackeys. The old idea re-surfaced, to create a real party of Russian Greens (those readers who have heard of the existing namesake are kindly asked not to confuse it with that poor excuse for a “green” party). And again, there are the tentative reverberations of the old talk: Who will be the leader? Where do we get the money? What do we put forward as the party program? Which aim is our minimum and which is our maximum?

It looks like Russia is seeing the comeback of the times of czarism and of building underground party cells; of the Aesopian language of the timid, ostensibly oppositional media and of the desperately low-profile publication of newspapers and magazines that in all fairness should be referred to as leaflets or activist sheets. On all that—and on the “president re-elect”­—go my congratulations to you.