Environment? What environment? Its the hoosegow! Of my latest reading, I remember best the New Years greetings by Mikhail Zhvanetsky.

Published on February 1, 2004 by Bellona 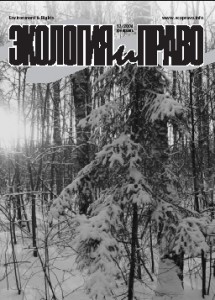 Ive always liked him for his wry, humorous way of talking about life and himself. He evenway to go, man!squeezed some laughs out of that story when he was tossed out of his own Jeep by a carjacker. Like, what did I expect showing off like I was Daddy Warbucks? But best of all, I like this one-liner: Hows the environment, you ask? What environment? Its the hoosegow!

I remember when in 1999, when Id just been released from prison, my first time, I told everyone during numerous meetings and discussions: Guys, there cant come nothing good out of a KGB spook, nothing, by definition, dont you get it? They wouldnt believe me. Theyd say, come on, theyd tell me hes actually a sheep in wolfs clothing. Hes a nobody and a nothing, and nothing will come of such a blend. Nothing good particularly But theyd look at me with pity.

Then followed the strangling of the NTV and TVS channels, newspapers, and magazines The emerging of a new brand of the pressservile press Babble about protection of the environment, a patronage of imports of spent nuclear fuel Perpetuated spymania Omnipresent hypocrisy Witch hunts for oligarchs Desecration of elections What good did he do since hes been in office? Can you remember? Can you? Shouldnt you shouldnt we all try to as the next electionhis electionis approaching?

Yes, of course our magazine is of an environmental and human rights orientation. But around us is our habitat, the environment in which we exist and where also they existthose who we are forced to be dependent on. Even though we dont elect them to be presidents and deputies. Even though they are elected by God knows who or why. But this is exactly why we will respond to the events that happen in our habitat. Including those events which affect the quality of our life. I, for one, do not wish bad to any of my readers: I do not wish there to be a hoosegow all around. It is there. Its quite visible, isnt it? Well, not to everyone, not yet.

It seems to me this new year will be a tough one for the environmental and human rights movement. And I still cant bring myself to share the excitement of those environmentalists and human rights advocates who, in spite of everything, nurture hopes of reaching mutual understanding with the state and its structures. Its enough for me to see the work of the Commission on Human Rights. Which is, by the way, quite modest.

It doesnt help to see how shriveled the financial support from foreign organizations has become. And ours wont spare a cent for environmental or human rights activities: the KGB shadow wont let them dare. The KGB, in their turn, will never give up their favorite clichй argument: See, of course these environmentalists are the enemythey feed on Western grants!

For many a year now, Russias been in the grip of a drawn-out civil war. One part of society is at war with another. Just look at our lap-dog courts. At the debauchery of bandits who, for some reason, call themselves prosecutors. At the way the state treats the rights of its people, including the right to live in an inhabitable environment. And everywhere, again, is lies and hypocrisy.

And so it will be. Because I, for one, still cant see nothing good coming from a KGB spook at the helm of a big country. Theres that old joke about a pianist in a Wild West saloon: Dont shoot the pianist, he simply cant play better. But its not a saloon pianist were talking about hereits the president of an enormous country, whose people deserve to live better, to live free.

Think for yourself who youd better vote for. I have no pointers for you here, because its worse than there being no choice to make: there is no choosing to begin with. Theres just a ragtag group of accidental tourists who have as good grounds to be president as the mentioned incumbentthat is, none.

P.S. When this issue was ready for publication, terrible news came from Moscow about an explosion in one of the capitals underground stations. Nearly 40 people died and dozens more were wounded At the time, the Russian president was meeting with the president of Azerbaijan. He chose not to address his people. Did he have nothing to say? Or did he not think he owed us an answer to this question: Until when must Russia sit on this volcano? Maybe indeed we need a different president
Grigory Pasko
Editor-in-Chief
Environment & Rights #12, February 2004