«Consider this a prophylactic case»

Grigory Pasko gives an account of his conversation with the deputy chief of the Pacific Fleet branch of the Federal Security Service, or FSB, which the renowned environmental journalist was treated to after reclaiming money that had been illegally confiscated from him by the secret services in 1997.

Published on October 9, 2003 by Grigory Pasko 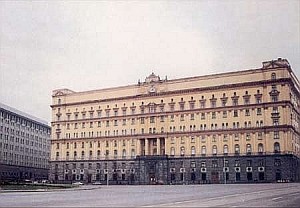 During my recent trip to Vladivostok, I found in my mailbox a notification from the Pacific Fleet branch of the FSB. The secret service was inviting me to come and receive the money that they had illegally confiscated from me six years ago, in 1997. 1

I came. I received. I asked when I could come back to collect the interest. Instead, they suggested, rather persistently, that I also pay a visit to the deputy head of the Pacific Fleet FSB, Comrade Glukhov.

I have to admit, I like going to museums, curiosities exhibits and other freak shows. Thats why I decided to go and have a look at yet another representative of such an odious organisation. All the more so because I remembered seeing that name under the surveillance materials and other investigation documents of the case that had been initiated against me as a suspect in March 1997.

Tenth floor. A narrow gloomy hallway. Dirt-stained shades on overhead lights, broken bulbs. In the corner by one of the walls, just as in 1997, dull-looking lieutenants and a wooden horse splashed with lime blots.

Sergei Glukhov informed me right away that he had been deputy for only a short time yet, and that they had a new boss. I replied that, apparently, even a case slapped together in such crappy slipshod manner—this Japanese spy case—did not prevent him from moving easily up through ranks and posts. Him as well as many other agents of this directorate.

What followed was actually Glukhovs monologue. He asked his questions in such a way that no answers were required. Galina has found a job yet? Your sons doing good at the university? The little boy goes to a kindergarten now? Hows the job at the magazine and at Novaya Gazeta? Et cetera, et cetera.

It was all too clear that to be so awkwardly using that ancient Cheka trick was giving Glukhov an unspeakable pleasure: His face seemed to beam with yet another demonstration that they know everything.

Then, for some reason, Glukhov started telling me in detail about what staff changes had taken place in the directorate and in the pre-trial remand jail in Vladivostok. I asked him if he seriously thought that I was interested in all this.

I got a grin and an empty stare of his whitish eyes for an answer.

Detective Yegorkin is now in Moscow, going to be a general at the Investigations Department, Glukhov said suddenly about a man in whose regard the Supreme Court upheld a special ruling by the Pacific Fleet Military Court that confirmed the falsification of certain materials in my case. Basically pronounced him a criminal.

I said was not surprised by that in the least. After all, if a KGB colonel could become the president of a country why wouldnt an ordinary law-violating KGB functionary make a colonel or a general in the same country?

Obviously, our conversation touched on my case, too.

Glukhov: Its all over And alls well that ends well.

I: I dont think its over. The Strasbourg Court has not had its say yet.

Glukhov: Consider this a prophylactic case A lesson for potential spies Our people have learnt a lot. Your lawyers have, too

I: I have drawn the firm conclusion that your people are incapable of learning anything at all

Glukhov reached over and took a copy of my book Were Singing to the Deaf from the windowsill.

I dont think I had remembered the name of one of a hundred of those secret service agents involved in the fabrication of my case when I was working on the title of the book. Now it seemed I had struck right home. Glukhov: Deaf by definition2

I: If you think it will help you

Glukhov: You dont have to take offence at us

I: Who said I was taking offence? Its not like one can take offence at the offended anyway

Glukhov: Um, because theyre refusing to issue you your travel passport…

I: Today theyre refusing, tomorrow therell be nothing they can do about it. Its nothing, just another demonstration of pettiness

Glukhov: Thats not us, thats the police

I: Oh come now Passing the buck like this

Glukhov: I can see youre in a hurry Oh yes, I remember, youve come to take part in the congress Let me sign your pass here Or else ah, hee hee they wont let you out hee hee And then youll say we lured you in to arrest you hee hee hee

I left the room.

There was no unpleasant after-taste from the meeting. There were no new thoughts either. Nothing changed, it was as old as the world itself. It was once, it has been before Executioners always feel drawn to their victims who happen to miraculously survive. In my case, though, there are a lot of executioners. If every one of them takes it into his head to make my acquaintance Ill have to order a reprint of my book.

1Grigory Pasko, a writer and investigative journalist who worked for the Pacific Fleets newspaper Boyevaya Vakhta, or Battle Watch, was arrested in Vladivostok on November 20th, 1997. The FSB accused Pasko for having committed high treason through espionage when working with Japanese journalists. Paskos publications focused primarily on nuclear safety issues in the Russian Pacific Fleet. Authorities were especially upset by a 1993 video of Russian naval vessels illegally dumping radioactive waste in the Sea of Japan that Pasko gave to the Japanese media.

After a prolonged battle in court, an amnesty and a re-trial, Pasko was on December 25th, 2001, convicted to four years of hard labour for treason and taken into custody. Amnesty International adopted Pasko as a Prisoner of Conscience on January 7th, 2002, saying that the prosecution of Pasko appears to be motivated by political reprisal for exposing the practice of dumping nuclear waste. The Supreme Court, however, upheld the conviction in an appeal hearing on June 25th, 2002. After serving two thirds of his sentence, Pasko was released on parole. He has, however, since his release, been illegally denied an international passport required for Russian citizens to travel outside Russia. Pasko is the editor of the Ekologiya i Pravo, or Ecology and Rights, magazine, which is published by the Environmental Rights Center Bellona in St. Petersburg, Russia. His case has been sent to the Human Rights Court in Strasbourg and is currently pending review.

2The Russian last name Glukhov is derived from the Russian root meaning deaf.