The Ussuriysk Municipal Court decided today to release journalist Grigory Pasko on parole. Thus, the saga of the environmental whistleblower has taken a new and sensational turn. 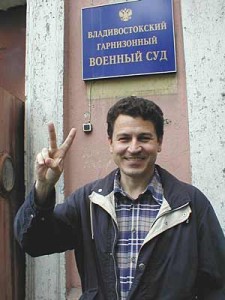 The Court decision was announced this morning around 05.00 GMT. Currently Pasko and his defence team are taking care of various paper work at the labour camp in Ussyryisk where Pasko was sent to serve his four year conviction.


Pasko will, however, walk out of the camp as a free man very shortly.


A great day for justice

Paskos release came unexpectedly. Less than a month ago, Yury Kalinin, head of Russias State Corrections Department (GUIN), told Alexei Siminov of the Glasnost Foundation that Paskos prospects for an early release were zero, since he had not admitted any guilt.

Now, the pendulum, however, seems to have swung the other way. &#151 This is a great day for justice, said, Frederic Hauge, president of the Norwegian Bellona Foundation.


Bellona has been instrumental in Paskos defence, both by setting up a solid team of lawyers for his legal defence, and by campaigning the case internationally as well as within Russia. &#151 We have been a great team, and I am indeed looking forward to continue working with Bellona, Pasko said.

Grigory Pasko who worked as an investigative reporter for the newspaper of the Russian Pacific Fleet was arrested on November 20, 1997 and charged with treason through espionage. He was acquitted of these charges by the Pacific Fleet Court in Vladivostok on July 20, 1999, but sentenced to a three-year imprisonment for ‘abuse of his official position’ although he was not charged with that crime, and released on a general amnesty.


After both sides had appealed, the Supreme Court cancelled the verdict in November 2000 and sent the case back for a new trial at the Pacific Fleet Court. The re-trial started on July 11, 2001 and ended on December 25, with Pasko being convicted to four years. The verdict was again appealed by both sides. On June 25, 2002 the Military Supreme Court confirmed Pasko’s four-year sentence. Pasko was transferred to a labour camp in the Russian Far East on September 10, 2002. His release was originally scheduled for April 25, 2004.