Military journalist and environmental whistleblower Grigory Pasko — who has for five years fought to clear his name of espionage charges — was finally set free today at a parole hearing in Ussuriysk, Far Eastern Russia. His freedom brings to a close a campaign of harassment by the Federal Security Service that saw him branded as a traitor for his reporting on the Russian Pacific Fleet and its irresponsible handling of its nuclear waste.

Published on January 23, 2003 by Charles Digges

It also signals a larger victory over Moscow’s ongoing cloak and dagger spy-hunt against environmental activists and whistleblowers, as well as dealing a blow to the ever-tightening grip of Vladimir Putin’s Kremlin on the free press.

"We defeated them all," said Pasko’s Lawyer, Ivan Pavlov, in a telephone interview after the four-hour hearing in Ussuriysk. Pavlov is the director of the Bellona ecological and human rights centre in St Petersburg.

"They were all working against us — the prison administration, the prosecution, special services — but we won," he said elatedly.

The victory is also a personal vindication for Pasko, who has maintained his innocence through two military trials, and who even rejected offers of pardon offered to him by Federation Council Speaker Sergei Mironov on the basis that an innocent man cannot be amnestied. The four-year sentence in a hard labour prison camp that was handed down by a military court in December 2001 brought him the support of international environmental and human rights groups and he was named the third Russian prisoner of conscience — after Andrei Sakharov and Bellona’s Alexander Nikitin — by Amnesty International.

Speaking by telephone to Bellona Web after leaving the prison colony, Pasko was delighted simply to be going home.

"My plans for tonight are to see my children, who I haven’t seen for such a long time," he said, sounding relaxed and confident. Later in the week, he said, he will fly to Moscow and greet his wife, Galina Morozova, who will be flying in from Germany.

He also said that he had received over 500 letters from supporters while in prison.

"I want to tell them how important it was to have that support and know people were thinking about me. This is a common victory for us all," he said.

Pavlov ascribed today’s victory to the fact that the parole hearing was held in the Ussuriysk city court — a civilian court "which was able to see the truth," said Pavlov, as opposed to the military courts which have twice convicted Pasko, and subsequently dismissed his appeals.

"It’s the first time a court — which was a civil court — has agreed with all the arguments of the defence. Before this, the case had only been looked at by military courts," said Pavlov.

Indeed, today’s parole hearing looked like it would shape up as another FSB puppet show orchestrated with pressure from the security services and the military — both of which have been concerned with saving face and keeping the lid on the navy’s nuclear dangers screwed tightly shut.

In recent days, Yury Kalinin, who presides over Russia’s corrections department — known by the Russian acronym GUIN — said publicly that he didn’t expect Pasko to be released. In the days leading up to the trial, the prison administration seemed to be deliberately dragging its feet in submitting necessary documentation to the court that heard Pasko’s parole case.

Then, yesterday, the prison sent a statement to the court with a recommendation against Pasko’s release. In it, they cited Pasko’s unwillingness to participate in amateur group talent shows with other inmates, his refusal to write for Road to Freedom, the GUIN newspaper, and unflattering comments he made about the prison administration in a recent letter to his wife, as reasons to deny him parole. 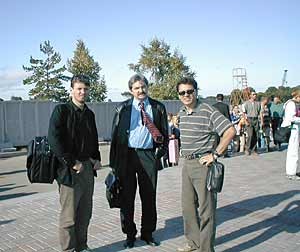 In court, said Pavlov, the prosecutor argued against freeing Pasko because he would not confess his guilt.

What Pasko did say at the hearing, according to Pavlov, was simply that the time had come to release him, and that the charges against him were unfounded and illegal.

The foundation of Pasko’s conviction was a set of notes he made while attending a meeting of naval brass while working as a reporter for the Pacific Fleet newspaper, Boyevaya Vakhta. In December 2001, the Pacific Fleet Court in Vladivostok acquitted Pasko of charges that he had passed the notes — which allegedly concerned "secret naval manoeuvres" — to the Japanese media, but convicted him for allegedly intending to pass the notes on.

In 1999, the same court had acquitted Pasko of treason, but convicted him of abuse of his official authority for his supposedly negligent contacts with the Japanese media, which included passing Japanese television a videotape made in 1993 that showed Pacific Fleet ships illegally dumping nuclear waste in the Sea of Japan. Pasko was immediately amnestied, but he appealed the conviction to the Supreme Court.

The unexpected result of that appeal was new trial and a conviction in December 2001 on the same charges of treason that Pasko had earlier been acquitted for. His attorneys, Bellona and rights groups throughout the world maintained that these charges were fabricated by the FSB and relied heavily on two now-defunct secret Defence Ministry decrees — Nos. 010 and 055.

For now, Pasko is set on extracting total exoneration. Pavlov said that in coming days he will submit a supervisory appeal to the chairman of the Russian Supreme Court, Vyacheslav Lebedev. On Dec. 24, Nikolai Petukhov, the chairman of the Supreme Court’s Military Collegium, refused to take the appeal. If Lebedev agrees to take the appeal, it could lead to a reversal of the verdict that imprisoned Pasko, and legally clear his name.

Pasko also has an appeal before the European Union Court of Human Rights to address prosecutors violations of the Human Rights convention. Among those rights spelled out by the convention that were violated in the Pasko case are the right to determination of criminal charges within a reasonable time; the right to a fair trial; defences against being tried retroactively and under too extensive an interpretation of existing legislation; and the right to freedom of expression.

Bellona’s Nikitin — who himself spent five years battling similar charges of treason for blowing the whistle on the Northern Fleet’s handling of its nuclear waste — was elated at the news of Pasko’s release.

"This is the second time in my life that I have experienced such a feeling. The first time is when all of this happened with me and the second is when I called Vladivostok and found out that Pasko had been freed," Nikitin said in a telephone interview from Moscow.

"It’s a feeling that’s hard to explain — it’s a relief that comes after so much pressure and then, all at once, the pressure is over — it’s just wonderful, everything that’s happened is wonderful."

"I think that what Bellona is doing in Russia with this case is creating a legal precedent. And this is the second time following Nikitin’s full acquittal in 2000 that the FSB doesn’t get what it wants," said Hauge.

"This should be a clear message to the FSB, and we will continue to fight."

Grigory Pasko is editor-in-chief of Bellona ‘s Russian language magazine Ecology and Rights. He will now move to European Russia and continue his work on this project in a full-time capacity.