As the parole hearing to free imprisoned journalist Grigory Pasko approaches, the Parliamentary Assembly of the Council of Europe (PACE), has this week sent a fact-finding rapporteur to examine the case, which has generated international outrage.

Published on November 30, 2002 by Charles Digges 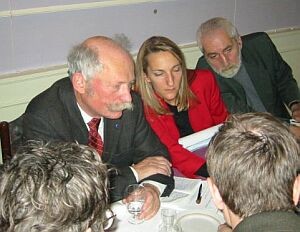 While here on a trip that began on Monday, and included other agenda items besides the Pasko case, Rudolf Bindig, a German delegate to PACE, met with the head of the Military Collegium of the Russian Supreme Court, Nikolai Petukhov; Justice Minister Yury Chaika; staff members from the Ministry of Foreign Affairs; deputies to Federal Security Services, or FSBs, chief Nikolai Patrushev, officials in the Prosecutor Generals office  as well as Duma Deputy Alexander Shishlov, Bellona representatives and human rights activists.


Bindig, however, opted not to fly to Vladivostok to meet with Pasko in person  or speak with Far East officials of Russias state corrections department, known by the acronym GUIN  saying he would make such a trip this spring if Pasko was still incarcerated. Indeed, Bindigs packed, four-day agenda in Moscow left him only one day for matters concerning Pasko.


According to Paskos supporters, Bindigs authority is more symbolic than judicial at this point, but the fact that PACE would a send rapporteur is a strong statement from the Council of Europe that gross violations of justice are suspected in the Pasko case, which will be recorded in a report that Bindig will prepare for PACE in Strasbourg.

Bindigs visit opened certain doors that we could not open ourselves, said Paskos lawyer Ivan Pavlov in an interview Wednesday. As a member of PACE he can go ask questions of the minister of justice and others, and they cant really refuse him.


The most important thing is that Bindig is here, said Boris Pustyntsev, chairman of the St. Petersburg-based human rights watchdog Citizens Watch, in an interview with Bellona Web.


The [Russian] government understands there is a time bomb that it wont be able to defuse, and if doesnt explode here, then it will explode in Strasbourg.


By far the most important of Bindigs visits was to the chairman of the Military Collegium of Russias Supreme Court, Nikolai Petukhov. Petukhov was standing in for Supreme Court Presidium Chairman Vyacheslav Lebedev, who was said to be on vacation during Bindigs visit. Lebedevs secretary confirmed Wednesday that the presidium chairman was unavailable but declined to say whether he was on vacation.


At issue during the discussion, on which Bindig later briefed Bellona Web by telephone, though he refused to be quoted directly, were the progress of the so-called supervisory appeal filed by Pasko’s defence  a document requesting that the Supreme Courts Presidium review trial documents based on arguments that the case was previously mishandled and render a verdict. It is still unknown whether the presidium will take the supervisory appeal for consideration.


Petukhov, as chief military justice and Lebedevs deputy, is a member of the Supreme Courts fifteen-judge presidium  meaning he is directly involved, and will have a vote in, Paskos supervisory appeal hearing if it takes place.


One possible result, when the presidium convenes under Lebedevs chairmanship, is that the judges will find that no laws were violated by Pasko, the case will be thrown out and Pasko will walk free. Another is that the presidium comes to a different opinion than the lower justices of the Supreme Court about the qualification of the crime and the gravity of the case and Pasko will be given a lighter sentence.


The third outcome, as relayed by Petukhov to Bindig, is that the presidium judges decide that the original case was handled according to Russian law, thus leaving the present verdict to stand.


Petukhov told Bindig he believed the second option could be a possible outcome. Despite several phone calls and faxes, Petukhov could not be reached for further comment.

What was revealing about Petukhovs comments, said Pavlov, was that the judge openly discussed the hypothetical outcomes of  and even offered his own prediction about  the supervisory appeal procedure, prior to Petukhovs own filing of a so-called contestation of verdict, or protest of sentence.


The very revelation would be good news for the defence team because it would mean that the supervisory appeal was not thrown out to begin with. Nonetheless, the appeals fate still depends on what phrasing the judge will choose while writing the contestation of verdict. Furthermore, it is irregular that the defence would find out that a supervisory appeal was underway second-hand, and not directly from the judge as he files the contestation of verdict.


That Petukhov would tilt his hand to reveal what he thought the outcome of the supervisory appeal would be  before the protest of sentence had been filed  led Pustyntsev to believe that the state apparatus arrayed against Pasko was getting uncomfortable.


Petukhov is giving hope for a better outcome [than that Pasko simply remains in jail] because it means they are getting worried, Pustyntsev said.


Ironically, Paskos parole hearing could come as soon as Dec. 25, while the Supreme Court could still be reviewing the supervisory appeal. But according to Bindigs impression of what he was told by Petukhov, the presidium will decide what to do with the appeal prior to that date.


Pavlov also underscored that the parole hearing and the supervisory appeal are two entirely separate matters. If, for instance, Pasko is paroled but the presidiums deliberations lead it to support the verdict of the court that sentenced Pasko, he nonetheless remains free.

While visiting Petukhov, Bindig said that the judge showed him what was allegedly an incriminating piece of evidence in the Pasko case  a sheet of notes which according to Petukhov, contain information on highly developed technology for locating submarines. The notes were taken by Pasko while at a meeting of Pacific Fleet naval brass on Sep. 11, 1997, where he, as a reporter for the Pacific Fleets Boyevaya Vakhta newspaper, was authorized to be.


It was later insinuated by the FSB that Pasko intended to pass these notes to a Japanese journalist. However, throughout the ten weeks Pasko possessed the notes  during which time he phoned his Japanese counterpart, Tadishi Okano, dozens of times  not once, according to transcripts of Paskos bugged telephone, did Pasko mention the notes in question.


According to the indictment against and conviction of Pasko, the notes contain no secret information on any technology for locating submarines, but nothing more than the reporters scrawl regarding communication failures during Pacific Fleet naval exercises in early September 1997, said Bellonas Jon Gauslaa.


Pasko was nonetheless convicted and sentenced for intending to pass this information on to Okano.


Because of these notes, Petukhov told Bindig he thought that the court is dealing with an espionage case, not a case of freedom of expression or ecological safety. Bindig said, however, that Petukhov was willing to study the notes again.


But Pustyntsev of Citizens Watch maintained that Petukhov was a bit player in the Pasko drama and been foisted on stage to deal with Bindig because Lebedev did not want to speak with the Council of Europe about the case. In the matter of Paskos fate, Pustyntsev said of Petukhov: Its obvious he doesnt decide anything for himself. His decision will be what Lebedev tells him to say.

One meeting that, in Pustyntsevs assessment, might have been crucial, but that Bindig missed out on, was a meeting with Federation Council Speaker Sergei Mironov  a powerful figure in President Vladimir Putins St. Petersburg political clique  who, even prior to Paskos conviction, which came in December last year, expressed his sympathy for the reporter.


Mironov has remained a staunch critic of the verdict, and has been instrumental trying to drum up government support for Paskos freedom. Pustyntsev, at Bindigs behest, undertook to arrange a meeting between the two men.


In the end, however, Bindig took a meeting with Oleg Mironov instead  not through any error caused by the last names, but because the latter Mironov is Russias elected human rights ombudsman  a figure with far less political clout than his namesake and far more to answer for because of his waffling stance on crucial human rights issues like the Kremlins bloody war in Chechnya, its stifling of the press, its troubling tendencies to persecution of scientists, environmentalists and writers, and battle on the rights of ethnic minorities.


[PACEs] mistake was that they chose the wrong Mironov for their meeting. Oleg Mironov is a lame duck who is fading into the shadows and will not be elected again, said Pustyntsev.


As Pustyntsev said, hes already looking for a new job, the authorities dont want him anymore, and he is getting less and less active in the issues he was elected to promote.

In coming to Russia on his fact-finding mission, Bindig stressed that it was PACEs intention to impart on the Russians that it was watching the proceedings in the case very closely. He also wanted to underscore that PACE would be ready for Pasko and his defenders to turn to them and help sue for damages Pasko suffered while in custody, regardless of the outcome of the case.


Back in Ussuryisk, Paskos prison colony holds parole hearings on the second and fourth Monday of every month, meaning, under these rules, Pasko would be before the parole board Dec. 25.


The problem, however, is that Pasko, like any other inmate, will be expected by the parole board to admit his guilt and declare he is reformed  something in all honesty Pasko cannot do, being innocent of the charges he was imprisoned for. He and Pavlov have therefore devised a rhetorical strategy that will both allow Pasko to speak with a clear conscience and get his walking papers stamped.


We are law-abiding citizens, Pavlov has urged his client to say. We respect the law, and we have to make peace with the verdict that has come into legal force, but we will only go along with it until the minute it is annulled.