The Parliamentary Assembly of the Council of Europe has decided that its Rapporteur on the Pasko-case, Rudolf Bindig, should visit the convicted journalist in the labour camp. 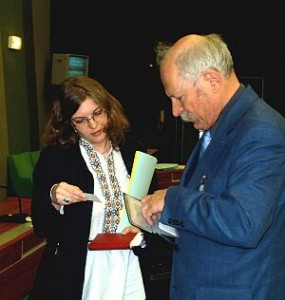 Members of the Parliamentary Assembly of the Council of Europe (PACE) have on several occasions expressed their concerns regarding the conviction of Grigory Pasko. In April 2002 PACEs Committee on Legal Affairs and Human Rights appointed the German parliamentarian Rudolf Bindig as its Rapporteur on the case.

Meeting the Chairman
Mr. Bindig has followed the case closely since then. On October 28, the PACE Committee on Legal Affairs and Human Rights once more considered the conviction of Mr. Pasko, and decided that Mr. Bindig should meet the President of the Supreme Court of the Russian Federation, Vyacheslav Lebedev, in order to discuss the case.

The Rapporteur has asked to meet Mr. Lebedev in Moscow on November 27 or 28. He also plans to meet representatives of the prosecution and Mr. Paskos defence team, while working on his preliminary report on the case.

Hopes to visit Pasko
The PACE Committee on Legal Affairs and Human Rights has also decided that Mr. Bindig if possible should visit Grigory Pasko in the labour camp in Ussuriysk, 100 km Northwest of Vladivostok in the Russian Far East, where he currently is serving time.

The visit to Ussuriysk will be organised at a later stage. Also several other groups have expressed their intention to visit Pasko in the camp, including the Green Group of the European Parliament. In September the Group nominated Mr. Pasko as its candidate for the Parliaments yearly Sakharov Prize for the Freedom of Thought.

The prize was awarded to the Cuban dissident Oswaldo Paya Sardinas. Yet, Paskos nomination was a moral boost both for himself and for his numerous supporters.

*****
Grigory Pasko was arrested on November 20, 1997 and accused with treason through espionage. He was acquitted by the Pacific Fleet Court in Vladivostok on these charges on July 20, 1999, but sentenced to a three-year imprisonment for misusing his position and released on a general amnesty. Both sides appealed the verdict.

In November 2000 the Russian Military Supreme Court cancelled the verdict, and sent the case back for a new trial at the Pacific Fleet Court. The re-trial started on July 11, 2001 and ended on December 25, with Pasko being convicted to four years of hard labour for treason and taken into custody. The verdict led to huge protests inside of as well as outside Russia, but still the Military Collegium of the Russian Supreme Court confirmed Mr. Paskos four-year sentence on June 25, 2002. Pasko will be released on April 25, 2004, unless he gets a conditional release.