Officers of the Federal Security Service, or FSB, raided the office of an Irkutsk-based environmental organization, confiscating 15 computer hard drives they allege contain ecological information pertaining to a planned $2.5bn oil pipeline to be built through Siberia to China, ecological activists in Siberia, Moscow, as well as the FSB, said Monday.

Published on November 25, 2002 by Charles Digges 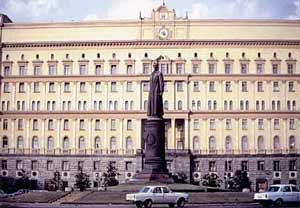 While searching the offices of the Baikal Environmental Wave Friday afternoon, activists and FSB officers confirmed in phone interviews that several 1:500000-scale maps showing areas surrounding areas contaminated by radioactivity around the Angarsk chemical combine — a uranium enrichment facility — as well as a list of the group’s volunteer workers were also seized. Activists also were detained at the office of Baikal Wave for several hours while the FSB conducted the search, and they were allowed access neither to telephones or fax machines, activists said in interviews. As of Monday morning, phone and fax lines were still not working at the office.


Alexander Nikolyuk, a deputy head of the FSB’s regional office in Irkutsk, said Sunday in televised remarks on Rossiya — a state-run national television broadcaster with close ties to the Kremlin — that no criminal charges would be filed against the ecological group. He did say, however, that charges of disclosing state secrets would be filed against “those who supplied the secret information, including reports about radiation safety, to the environmentalists, but not against the environmentalists themselves,” he said.


The official explanation for the search was Baikal Wave’s contract with the Sosnovgeos geological laboratory for the creation of the maps, signed in February — and on Monday a spokesman for the Irkutsk FSB, who did not want to give his name, told Bellona Web that charges of spreading state secrets had been filed against the lab.


But the environmentalists said the timing indicated the raid and the map seizures were only a pretext for the real purpose of the raid, which was to prevent the ecological group from interfering with the construction of the pipeline, which is to be built by the Russian oil giant Yukos.


“Officers pretended they were looking for some secret maps in our office, but those maps were made public in the beginning of the year,” Marina Rikhvanova, co-chair of Baikal Environmental Wave, said in a telephone interview from her home in Irkutsk on Sunday.


She also emphasized that the computer equipment taken contained no information relative to the maps, and was thus confiscated to create a disruption. Furthermore, she said copies of the maps had been furnished nearly 10 months ago to the Irkutsk Regional administration, Russia’s nuclear regulatory agency Gosatomnadzor, or GAN, Sanepidnadzor, the government health inspectorate, and finally Radon, which works to decontaminated radioactive areas.


All agencies said through spokesmen Monday that they had received the maps and that they were public information. The spokesman for GAN’s Irkutsk offices, who requested anonymity, added that the information contained on the maps did not even specify locations of workshops of the Angarsk plant or even the boundaries of the facility. The facility itself is located underground and used for the production and enrichment of uranium for use in civilian reactors.


“These maps are specifically related to areas of radioactive contamination, that is all,” he said. “And that information is public information.”


FSB agents interviewed Sunday on Moscow’s TVS, however, said that the maps would be confiscated from all organizations to which Baikal Wave had sent them.


Rikhanova and others believed there was another motives behind the raid — mainly a move by well-connected financial powers to strong-arm the organization into silence about its opposition to theYukos pipeline.


“We believe they were interested in confiscating the ecological expertise materials that we were preparing for public hearings on the oil pipeline, which will take place on November 27th,” she said. The absence of the maps, she said, would severely handicap any public presentation that could be made against the pipeline.


Moscow’s Greenpeace, in a lengthy statement, supported that assertion, writing: “Use of the state law enforcement structures by big commercial companies to stand behind their financial interests, unfortunately, is not such a rare phenomenon in our routine life,” the statement read.


“The search conducted at Baikal Ecological Wave,” it continued, “coincided with the conducting of expert ecological fitness tests to in connection with the construction of and oil pipeline by Yukos through the territory of the Tunkinsky National Park. Baikal Wave has been a leading opponent of this construction.”


Another possible motivation for the raid is Angarsk chemical combine Director Victor Shopen, who was outraged to learn that Baikal Wave had furnished the Irkustk administration with reports of contaminated water and soil, sources at the combine who requested anonymity told Bellona Web.


Rikhvanova said environmentalists’ main concern was that the pipeline not run either through the Tunkinsky nature reserve in Buryatia or close to Lake Baikal. Both areas, she said, are prone to earthquakes.

–>
“We can’t allow any pipeline in this area because of the threat to water reserves in case an earthquake damages it,” she said


Neither the Moscow nor the Irkutsk office of the FSB responded to further questions faxed over the weekend. The FSB spokesman in Irkutsk Monday confirmed over the telephone Nikolyuk’s remarks on Rossiya, saying that maps and computer equipment had been taken, but would not discuss their alleged contents, but added that the confiscated computer hard drives would likely be returned to the environmental group on Monday. The spokesman denied there was any connection between the raid and the interests of Yukos oil.


Yukos spokesman, in remarks Alexander Shadrin denied, in remarks to The Moscow Times, that Yukos had any connection to the raid. Yukos, he said, is in regular contact with Baikal Wave and in early November supplied it “with complete ecological data on the project. It would not have been serious to now be getting it back via the FSB.”


“If [the project] does not meet environmental protection standards, no construction will take place,” he said, according to the paper. “And, look, remember that it is not our pipeline — we are fulfilling a state order under a Russian-Chinese intergovernmental agreement.”


Nevertheless, Vsevolod Medvedev, the chief geologist from Sosnovgeos working on the mapping project with Baikal Wave, told Bellona Web he had been questioned by the FSB.


“I asked [during the interrogation] why what was not secret a year ago is now secret, but they just laughed,” he said.


“Information about radioactive contamination cannot be classified because of ecological law. There are no secrets in these documents.”

–>
Bellona’s Alexander Nikitin, a former naval captain who spent four years fighting espionage charges for drawing attention to the Russian Navy’s negligence with its nuclear waste, is familiar with the procedures deployed by the FSB against Baikal Wave. Nikitin was fully acquitted in September 2000.


The pipeline, to be developed jointly by Yukos and state-owned China National Petroleum Corp., is to run for nearly 2,500 kilometers from Angarsk near Irkutsk to China’s industrial northeast.


Shadrin said the feasibility study had been sent to the State Construction Committee and Natural Resources Ministry for their approval, The Moscow Times said.