You are reading a new issue of our magazine. This time the main topic is the Ecology and Human Rights conference that took place in Miass in Chelyabinsk county. At least it was supposed to be the main topic.

Published on September 1, 2002 by Bellona 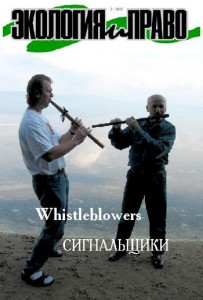 However, it turned out, that we were writing about the activities of whistleblowers. They are people who reveal wrongdoings, fraud, violations of law, safety hazards and often  environmental dangers posed by their plants and organizations. If a plants administration doesnt want to notice some evidently unlawful actions, a whistleblower does his best to make journalists, activists of environmental organizations and MPs notice them.


Having heard about the topic of our new issue, some people asked us: Are you going to write about tell-tales? But whistleblowers have nothing common with them. They dont act because of self-interest, anger or vengeance, what they want is to prevent accidents and even catastrophes, such as Chernobyl, explosion at Piper Alfa, wreck of Komsomolets and Kursk submarines. That is why it is so important for us to hear their voice in time. So we may need a law that will defend whistleblowers, like in several western countries.


We think that if such law existed in our country, our editor-in-chief Grigory Pasko would be now preparing this issue with us. But for the time being he writes for us from his prison cell. He got there only because he dared to tell the truth about the events in Chazhma bay, about dumping radioactive waste in the sea, how the money allocated for the decommissioning of laid up nuclear submarines, are melting away He is accused of being a military journalist. His prosecutors affirm that all his articles would be appropriate if he were a civil person. But we believe that it is not his fault, but his merit. He doesnt shield slipshodness and offences in the armed forces.


Paskos fate is a typical fate of a whistleblower in Russia. Recently he has been transferred from a detention prison in Vladivostok to a labor camp near Ussuriysk. In mid-September the Pasko defense-team filed to Vyacheslav Lebedev, the Chairman of the Supreme Court a request, urging him to bring the case before the Supreme Court Presidium for a supervisory review. We believe the Supreme Court decision on the Pasko case will be reconsidered. We believe Grigory will work on the third issue with us.