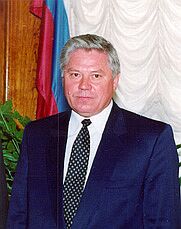 The Pasko-conviction has angered international human rights and media freedom groups. The European Parliament and Western governments have criticised it as part of a wider crackdown on media freedom. Also Russian voices have joined the chorus of criticism.

Grigory Pasko, a reporter with the newspaper of the Russian Pacific Fleet, was sentenced to four years in prison by a Military Court in Vladivostok for having the alleged intention to transfer notes taken at a meeting of naval commanders, to Japanese media. Pasko’s four years sentence was upheld on June 25 by the Russian Supreme Court’s Military Collegium.


On Wednesday several lawmakers and human rights activists appealed to Supreme Court chairman Vyacheslav Lebedev, urging him to use his right to bring the case before the Supreme Court’s Presidium, its governing body, for a re-consideration.


“The ruling of the Military Collegium cannot be called the result of objective consideration of Pasko’s case by an independent and unbiased Court,” the letter reads. “We are urgently requesting you to  consider this case at the presidium of the Supreme Court.”

The letter is signed by Grigory Yavlinsky, leader of the Yabloko party; Boris Nemtsov head of the Union of Right Forces party; Alexei Simonov, head of the media freedom monitoring group Glasnost Defence Fund; Lev Ponomaryov, head of the All-Russian Movement for Human Rights; and a number of other prominent figures.


Pasko’s defence team said at a news conference after the June ruling that it also would request Mr. Lebedev to bring the case before the Supreme Court Presidium. The full text of the Military Supreme Court ruling has not yet been made available, but according to defence-attorney Ivan Pavlov, the defence reckons to forward its request by the end of July.

Grigory Pasko was arrested on November 20, 1997 and charged with treason through espionage. He was acquitted of these charges by the Pacific Fleet Court in Vladivostok on July 20, 1999, but sentenced to a three-year imprisonment for ‘abuse of his official position’ although he was not charged with that crime, and released on a general amnesty.


After both sides had appealed, the Supreme Court cancelled the verdict in November 2000 and sent the case back for a new trial at the Pacific Fleet Court. The re-trial started on July 11, 2001 and ended on December 25, with Pasko being convicted to four years of labour.


The verdict was again appealed by both sides. On June 25, 2002 the Military Supreme Court confirmed Pasko’s four-year sentence. Pasko, who still is being kept at a solitary cell at the pretrial-detention center in Vladivostok, will be released on April 25, 2004.