On Monday Galina Morozova will visit her husband Grigory Pasko in a Vladivostok prison to celebrate his birthday. They will talk about him hitting the “big 4-0” on telephone receivers as they face each other through thick wire meshed glass. She will bring him letters from friends and supporters that already will have been opened and read by agents of the Federal Security Service (FSB). 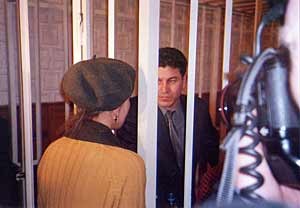 Then, the one-hour visit for this month will end and she’ll return home to the children, 18 and 3, and resume the business running a semblance of a normal life. Later in the day, if well-wishers telephone to hear about Grigory’s progress, the FSB will be listening in and will hear about it too.


Galina, 39, has been stoically digesting this petty harassment since 1997, when the security services first took note of her husband’s journalistic investigations on the Russian Pacific Fleet’s negligent nuclear waste dumping procedures in the Sea of Japan. After five years, it has ceased to have much of an effect on her.


“They don’t persecute us[but they are] keeping our family under control — controlling my son and me too,” she said in an interview with Bellona Web in Moscow on Tuesday. Her remarks betray no fear, only the conviction that the life of her family will continue with or without the intervention of the state.


To be sure, Galina does not make the impression of a woman who is driven to desperation by the situation her family is in. To the contrary, she is fully in control of every soft-spoken word she says. She is no injured victim of a bewildering state. Rather, she is someone whose private standards of human conduct have been violated, and the blunt plodding of the authorities elicit in her an articulate, focused defiance.


On Dec. 25, Galina’s husband, a Vladivostok-based military reporter for the Boyevaya Vakhta newspaper, was convicted of treason in a Pacific Fleet military court and sentenced to four years in prison for attending a meeting of naval brass and possessing notes he made there.


The FSB maintained that Pasko had intended to pass this information, which allegedly concerned “secret naval manoeuvres,” to the Japanese media — though he was never accused of actually having done so.


In 1999, the same court had convicted Pasko of negligence for passing film to Japanese TV journalists of Russian Pacific Fleet ships illegally dumping nuclear waste in the Sea of Japan. Pasko was subsequently amnestied, but appealed the decision based on the notion that an innocent man cannot be amnestied.


However, also the prosecution appealed insisting that Pasko was a spy. In November 2000 the Military Collegium of the Russian Supreme Court cancelled the verdict of the Pacific Fleet Court and sent the case back for a re-trial.


The unexpected result of the re-trial was a conviction to of treason through espionage, which his attorney, Bellona and rights groups throughout the world maintain were based on charges fabricated by the FSB and relied heavily on two spurious Defence Ministry orders — one of which was abolished by the Supreme Court last week and the other of which was determined at the same hearing not to have the force of law.


In late May or early June, the Military Supreme Court will hear the appeal to Pasko’s latest conviction.


Following that conviction last December, voices high in the Russian Government — most notably Federation Council Speaker and ally to President Vladimir Putin, Sergei Mironov — began making statements indicating their disagreement with the verdict and began dangling the possibility of a pardon for Pasko.


According to Galina, the offer for a pardon was made.


“We could apply for a pardon — they let us know that such an appeal would be approved and he would be free,” she said.


Given the family’s current circumstances, its tempting to think that taking offer would have been an easy decision: Galina alone is shouldering the burden of feeding the children the two children, Ruslan, 18, Galina’s son from a previous marriage and the 3-year-old son of Galina’s late brother. Her workday at a private firm begins early and ends late, and her salary and time are stretched paper-thin


As for Pasko, he is staring down four years in a Russian jail, with contagious tubercular inmates, stomach-churning rations of watery stew, exposure to nameless infections, his own deteriorating health and the gnawing knowledge that he is innocent to keep him company.


So when presented with the option of begging the government’s mercy in exchange for freedom, Galina says: “Talking about the pardon was not difficult at all — we had the same opinion: a pardon does not suit us at all.”


“It was our common decision — to appeal for a pardon means to admit one’s guilt — if someone is not guilty of anything, how can he ask for a pardon?”


Since his second incarceration in December, Pasko has been named a Prisoner of Conscience by Amnesty International — the second Russian, after Bellona’s Aleksandr Nikitin, since the break-up of the Soviet Union to receive that designation, and only the third since Andrei Sakharov.

Additionally, the powerhouses of the western press — from The New York Times to the Washington Post to the Wall Street Journal — all weighed in on the December verdict with condemning editorials. This brought a level of international attention to Pasko equalled in recent years only by Nikitin, who battled the same Defence Ministry decrees for blowing the whistle on negligent nuclear waste handling practices by Russia’s Northern Fleet. Nikitin was acquitted in 1999.


But celebrity is not something that sits easy with either Galina or her husband, and she refuses to consider her husband a savoir or a martyr. “I don’t consider him a hero. And he doesn’t consider himself a hero,” she said. “Is it heroism to do one’s journalistic job diligently?”


Turning a blind eye to the problems he was exposing, she said, would have involved ignoring his conscience. He refused to do that.


“Is that heroism? He and I don’t think so,” she said. “He just became a victim of the circumstances.”


Indeed, she doesn’t consider that the reports he was filing involved any sort of special risk. They had discussed the possibility that his pursuits might bring unpleasantness, but she said she never quite thought he would get arrested.


“He began to notice the agents tailing him and the anonymous letters to the authorities complaining about him and he noticed there was some backstage game being played against him,” she said.


“But as a law abiding citizen he was hoping that if he didn’t violate any legislation as a journalist, if he conducted his journalistic activities according to the law and didn’t let him self step over any boundaries, then he could not be arrested.”


While the international media has identified the Pasko case as a chilling reminder of just how shabby are the states of free speech and access to crucial environmental information in Russia, the hometown press has not been so kind.


With two exceptions, said Galina, the papers in Vladivostok have been at best indifferent. At their worst, they have been rabidly spy-baiting, and have consigned Pasko to the role of traitor.


The worst, however, said Galina, has been state run ORT national television, which recently devoted a segment of its popular tabloid talk show “Chelovek I Zakon” (Man and the Law) to trashing Pasko as a spy.


On ORT’s “Odnako” (However) program, Mikhail Leontiev — who distinguished himself as a televised pro-Putin attack-dog during the 2000 presidential race — also heaped prime-time mud on Pasko.


Such bitterness from the quarters of the state run media jar with Federation Council Speaker Mironov’s earlier hints at leniency — word’s Galina and her husband never put much stock in anyway. But it does offer an insight into the government’s possible discomfort with Pasko’s decision to sit in jail rather than accept its bait of clemency.


“Who is this Mironov anyway,” said Galina. “He’s not the last man in the government. So what? Anyone can stand up and say something, but no one does anything.”


“There is no understanding of this state,” she added.


In the coming weeks, her husband’s case will be before the Supreme Court, which could lead to his freedom as early as June. Of course, she says, she is optimistic, but that optimism is tempered with a stoic caution — a habit developed, among other places, at her husband’s last trial.


“We expected anything from the state, but we were hoping,” he would be acquitted, she said.


“We even admitted the chance that the verdict would come back guilty because [the court] can’t go against the system, and that would be an indictment of the system,” she said.


Because of these experiences, her approach to optimism has become a sort of stern formula.


“I don’t have time to sit and lament my sad fate and the sad fate my family and my husband,” she said. “My oldest son is a student and I have to care for the smaller child so that he doesn’t just grow like grass I do everything myself. And it takes a lot of time,” she said, concluding, “You can find rescue from any problem in your work, in every day activity. To cry into ones pillow is not a way out. After the black strip always comes the white.”


Judging by Galina’s description of him, it is a creed that Pasko adheres to himself.


“He has a firm character and will not go limp, will not give in,” she said.


While in prison he has been reading copiously and studying the law, and even has ambitions of pursuing a legal career when his case is decided and he is again free. He is also taking copious notes on his life there, and writing legal complaints, both for himself and other prisoners.


“He finds what to do,” she said, and then paused to reconsider the phrasing. “A man can find what needs to be done.”