The Russian Supreme court ruled Tuesday that private citizens have no right to challenge presidential decrees in court, which essentially puts a temporary end to human rights groups seeking the exclusion of secret evidence used against defendants by prosecutors.

Published on April 3, 2002 by Charles Digges 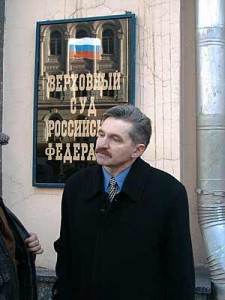 The Russian Supreme court ruled Tuesday that private citizens have no right to challenge presidential decrees in court, which essentially puts a temporary end to human rights groups seeking the exclusion of secret evidence used against defendants by prosecutors.

Bellona Ecologist and human rights campaigner Aleksander Nikitin, who brought the appeal, said the ruling does nothing less that put the president above the law.

“In the existing legal environment our president has become untouchable,” Nikitin said addressing court Tuesday. “This is against citizens’ constitutional right to challenge any decision of the state bodies in court.”

In a heated debate following the ruling, Judge Aleksander Fedin destroyed any notion of a balance of power for those assembled.

“We have joined European conventions, but show me a country in Europe where presidential or governmental decrees are challenged in court,” Fedin told journalists. “Do you think that Russia must rush headlong to get ahead of Europe?”

Russias legal experts said that the court essentially turned-tail and ran when refusing to consider Nikitins appeal, which is a hallmark of his ongoing campaign to stop secret decrees from being used to accuse academics, environmentalists and journalists of spying.

Nikitin had asked the court to consider three articles of the 1996 presidential decree No. 763, which explicitly permits secret orders to be used in criminal prosecution. Nikitin said the decree violates the Constitution, which says citizens’ rights may not be infringed upon by laws that are not made public.

Nikitin was acquitted in December 1999, but military Order No.055 has continued to be used against other high-profile defendants, including military journalist Grigory Pasko.

A former navy officer, Nikitin was arrested in 1996 on charges of treason and espionage after writing a report for Bellona that exposed information about the navy’s dumping of nuclear waste into the North Sea.

The case against him was based largely on the Defense Ministry’s secret Order No. 055, which gives a list of data the military considers to be state secrets.

Nikitin’s lawyer Leonid Saikin said the Supreme Court was not asked to rule on the constitutionality of the presidential decree but on whether it was in compliance with two federal laws, one on state secrets and one on citizens rights to obtain and disseminate information.

The Civil Procedural Code gives the court the authority to do this, Saikin said. Judge Fedin, however, refused to consider the case, saying there were no federal laws allowing the court to consider a citizen’s challenge of a presidential decree.

Moscow-based human rights lawyer Karina Moskalenko, whose own clients have long battled against secret decrees, said the Supreme Court was wrong not to consider Nikitin’s appeal.

“Even if there is a gap in legislation, the court must follow the Constitution,” Moskalenko said. “The Supreme Court was obliged to consider Nikitin’s complaint, but it just didn’t want to take the responsibility of considering this decree.”

Amendments to the Civil Procedural Code now before the State Duma give the Supreme Court the right to judge whether presidential decrees conform to federal law. The amendments are expected to be approved by the end of the year, Saikin said.

But Nikitin doesnt plan to wait that long. Once the Supreme Court issues its written statement indicating which laws it based its decision on, Nikitin said he will go back to the Constitutional Court to challenge these laws.

A second option would be to ask the chairman or deputy chairman of the Supreme Court to file the appeal asking the Constitutional Court to consider presidential decree No. 763.