The Russian Supreme Court starts tomorrow to hear two applications on the validity of the secret decree provisions used as a basis for the conviction of Grigory Pasko. Meanwhile, Paskos defence prepares to take the case to the European Court on Human Rights. 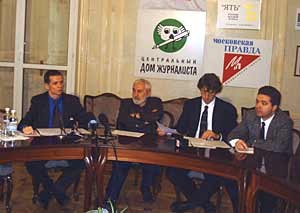 Grigory Pasko was on Christmas Day 2001 found guilty by the Pacific Fleet Court in Vladivostok of having possessed notes allegedly containing secret information. Although the Court did not believe that the notes were handed over to anybody, it ruled that Paskos intention was to hand them over to the Japanese journalist Tadashi Okano of the newspaper Asahi Simbu, and sentenced Pasko to four year of hard labour. The verdict has led to an outrage of protest both inside and outside of Russia.

Defence challenges use of secret laws
In addition to filing a full cassation appeal to the Russian Military Supreme Court, which is not yet scheduled for hearing, Paskos defence has in two separate applications challenged the use of secret and unregistered decrees as the basis for the guilty verdict. The hearing of these two applications are scheduled for February 12 and 13.

At a press conference at Moscows House of journalists, Ivan Pavlov, one of Paskos defence attorneys explained the basis for the applications.

– The conviction of Grigory is based on two provisions (points 129 and 240) of the secret and unregistered decree 055, which was issued by the Ministry of Defence (MoD) in August 1996. Although the Pacific Fleet Court has not directly referred to the provisions, it is still clear that the conviction is based on them. The court has based its verdict on the conclusion of the experts of the 8th department of the General Staff.

– When we interrogated the experts in court last September, they admitted that decree 055 had been the main legal instrument for their evaluation. Without using this decree it would have been impossible to find state secrets in Grigorys notes, said Pavlov.

"Illegal and invalid" provisions
Last fall, the Supreme Court as a result of an application filed by Aleksandr Nikitin, nullified several provisions of decree 055 on the ground that they had neither been published nor registered by the Ministry of Justice and thus, were illegal and invalid.

In addition to stressing the above-mentioned, the defence also argues that the actual decree-provisions go beyond the limits for classifying information drawn by the Law on State Secret; and that they are so vague and general that the use of them violates the principle of legality, which are ensured in several provisions of the Russian Constitution.

No contact with foreigners
The second defence-application challenges the validity of points 69 and 70 of the secret MoD decree No. 010, enforced on August 7, 1990 by the then USSR Defence Minister Dmitry Yazov, who in August 1991 played a major part in the ill-fated coup against Gorbachev.

The Pasko-conviction refers directly to the said provisions that forbid Russian officers and other military personnel to engage in any kind of contact with foreign citizens, unless such contact is a part of their duties as servicemen.

– The decree has never been published and thus, the use of it violates Article 15 (3) of the Constitution. Moreover, a provision that forbids Russian citizens to have contact with foreigners is a remnant from the Stalin-era, and contradicts Article 23 of our Constitution guaranteeing the inviolability of the private life, Pavlov said.

Will sue national TV
Pavlov also leapt on the opportunity to comment the recent broadcast on the Kremlin-controlled national TV, ORT, which in a primetime program sent on February 7, presented Pasko as a Japanese spy who deserves his punishment.

The program-makers tight connections to the FSB were visible both from their seemingly unlimited access to the FSB-archives of secret video-footage and from the number of FSB-officers taking part in the program.

– The program presented a series of lies, which not only contradict the truth, but also the verdict of the Pacific Fleet Court, said Pavlov and reminded the audience on the fact that even that court threw away 97 % of the charges against Pasko.

– We will take the program-makers to court, and I am fully confident that they will have to pay compensation, Pavlov concluded.

Verdict does not endure a critical light
Jon Gauslaa, lawyer of Bellona, explained why his organisation had engaged itself in the Pasko-case. - We followed the case from its start as it had many of the same features as the case against our employee Aleksandr Nikitin, when it comes to issues connected with environmental rights, freedom of speech and the rule of law.

Gauslaa said that the conviction of Pasko had gained much attention abroad, and mentioned Amnesty Internationals adoption of him as a prisoner of conscience and the recent resolution adopted by the European Parliament.

– Also several other organizations and governments have expressed their concerns regarding the conviction, and it is not hard to understand why. The verdict does simply not endure a critical light, Gauslaa said.

Preparing application to European Court
He added that the conviction seems to involve a number of violations of the European Convention on Human Rights (ECHR).

– First you have the use of secret decrees as the basis for the verdict and the vagueness of the actual provisions of the decree. It seems clear from the jurisprudence of the European Court of Human Rights that this may well involve a violation of article 7 of the ECHR.

– Then you have the fact the case now are well into its fifth year, which appears like a violation of Paskos rights under Article 6 (1) of the Convention to have the charges against him determined within a reasonable time. Moreover, Pasko was tried by a Military Court, where the judges were the subordinates of admirals who witnessed in court saying that Pasko should be punished. – How can such a court be considered as an independent and impartial tribunal in the sense of Article 6, Gauslaa asked.

– Moreover, in the verdict the Pacific Fleet Court states that the evidence against Pasko was obtained in violation with the Criminal Procedure Code. Still it based its conviction on the very same evidence although Article 50 (2) of the Russian Constitution states that illegally obtained evidence can not be used. This does in itself clearly hint that Pasko did not get a fair trial.

Gauslaa also referred to several other ECHR- provisions, and said that Paskos defence intents taking the case to the European Court of Human Rights if the conviction should stand. – We have started our work on the application, he said. But I hope that the higher instances of the Russian judiciary will be able to solve this case – as in the Nikitin-case – so that we would not have to file the application. But if we have to, then we will do it, he said.

***
Grigory Pasko was arrested on November 20, 1997. He was acquitted by the Pacific Fleet Court in Vladivostok of treason through espionage on July 20, 1999, but sentenced to a three-year imprisonment for misusing his position and released on a general amnesty. Both sides appealed the verdict. In November 2000 the Military Supreme Court cancelled the verdict, and sent the case back for a new trial at the Pacific Fleet Court. The re-trial started on July 11, 2001 and ended on December 25, with Pasko being convicted to four years of hard labour for treason and taken into custody. The verdict is appealed again by both the defence and the prosecution.