Russian Senate Chairman to talk about Pasko case with Putin

The Chairman will help to bail Pasko out of custody and talk to the Russian President about the controversial case.

Published on January 9, 2002 by Viktor Tereshkin 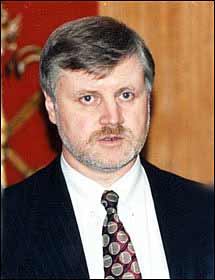 Pasko’s defence attorney Ivan Pavlov had a meeting Wednesday with Sergei Mironov, the chairman of the Federation Council (the upper chamber of the Russian parliament on the Pasko case.

During the 30-minute meeting Mr. Mironov was briefed on the verdict in the Pasko case, which are not worthy of a country ruled by law.


Ivan Pavlov informed the Chairman that the defence has lodged an appeal to the Russian Supreme Court. The appeal pledge the Supreme Court to abolish the conviction arguing that Pasko is innocent.


The defence has also lodged a petition requesting the Supreme Court to release Pasko from custody during the consideration of the appeal in the Military Collegium of the Supreme Court. Mr Mironov expressed his wish to sign a letter of guarantee addressed to the Supreme Court for Pasko, so that he could be set free.


Such letters are used in the Russian court system instead of bails.

During the coming weekend, Mr Mironov will meet President Vladimir Putin and intends to discuss the Pasko case with him.


President Putin appointed Mr Mironov to head the upper chamber of the Russian parliament in December 2001. Shortly after the appointment, Mr Mironov voiced his support for Pasko talking about the necessity for court reforms in Russia.


Pasko was found guilty by the military court in Vladivostok of high treason and was on December 25th 2001 convicted to serve 4 years in a labour camp. The verdict was appealed both by the defence and the prosecution. The prosecution believes the sentence is too mild and demands 12 years in prison for Pasko.


Sergey Mironov has reaffirmed again his support for Pasko and asked about the conditions in the custody where Pasko is being currently held. The lawyer said that the room where Pasko was set has bars on the window but no glass. There are currently severe frosts in Vladivostok and Pasko has fallen ill.

Grigory Pasko was arrested on November 20, 1997. At the end of a six-month closed trial in the Pacific Fleet Court in Vladivostok he was acquitted of treason through espionage on July 20th 1999, but pronounced guilty of abusing his official position. Amnesty International monitored the case closely, and expressed serious concerns about the fairness of that trial, and about the impartiality and independence of the court. Pasko was sentenced to a three-year imprisonment for misusing his official position, but was released on a general amnesty.


Both sides appealed the 1999-verdict. In November 2000, the Military Collegium of the Russian Supreme Court cancelled the verdict, and sent the case back for a new trial at the Pacific Fleet Court. After several postponements, the trial started again on July 11th 2001. It ended on December 25, with Pasko being convicted to four years of hard labour. Amnesty International adopted Pasko as a prisoner of conscience on January 7th 2002.