Pasko-trial postponed for another month

The experts who have examined whether it is Pasko who talks on FSB’s recordings of his telephone conversations or not, needs more time. Pasko says that he does the talking, but the experts are still in doubt… 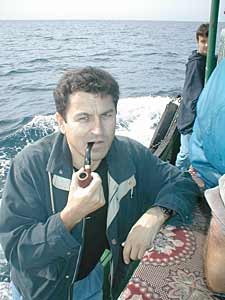 The Pasko-trial re-started on October 29, but not for long. At the end of the day, the Pacific Fleet Court announced that the proceedings would be postponed, probably for yet another month. The announcement took Pasko and his defence by surprise, and the bizarre reason for the postponement made them even more astonished.

It turns out that the phonetic experts that were called in by the Court in order to determine whether it actually is Pasko who talks on the FSB’s recordings of his telephone conversations with Japanese journalists, need more time to carry out their task.


The recordings have previously been played in Court. It then became clear that they have no value as evidence for the prosecution, as the content of Pasko’s conversations is completely innocent and do not touch upon secret information. Thus, Pasko could easily acknowledge in Court that his voice indeed could be heard on the recordings.


The experts were, however, not so sure. They did not rule out that Pasko could be identical with the person talking on the recordings, but needed one more month of examinations before they could conclude. The experts were further delayed by the fact that they also have to determine whether the transcripts in the case files of the recordings are correct or not, a task that they apparently find extremely difficult.

The Court will in the forthcoming days interrogate some more witnesses. It is expected to announce the length of the postponement on Thursday, but there is reason to believe that the trial will resume first on November 30, 2001. Pasko’s St. Petersburg-based defender Ivan Pavlov, explained that the Court had no other option than to postpone the trial. According to the Russian Criminal Procedure Code the expert-evaluation of the recordings has to be carried out before the Court can reach a verdict.


Pavlov was however, not impressed by the speed of the experts’ work. — They were appointed in the summer and they could at least have notified us about the delay so that we did not have to come here in vain, he said.

Grigory Pasko was arrested on November 20, 1997 on charges of espionage on behalf of the Japanese TV-channel NHK. He was acquitted in July 1999, but convicted of ‘abuse of official authority’ and freed under an amnesty. Seeking a full acquittal, Pasko appealed, but so did the prosecution, insisting he was a spy. On November 21, 2000 the Russian Military Supreme Court sent the case back for a re-trial at the Pacific Fleet Court. The re-trial started on July 11, 2001, and after the latest postponement, it seems unlikely that the Court will be able to determine the case before the end of the year.