Although the Pacific Fleet Court’s interrogations of the state secret experts were carried out behind closed doors, the experts were not able to hide their incompetence and lack of professionalism. 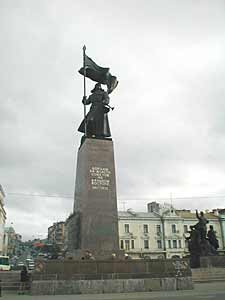 The experts themselves refused to comment the events in Court publicly, in order to protect ‘military secrets’ from being disclosed. The information below does, however, only disclose the experts’ incompetence and lack of professionalism. Such items of information are not classified by the secret military legislation the experts have based their evaluation on, and even less by the officially published Russian legislation.

– Why did you use the secret decree?
After the first day of interrogations (September 19), defence attorney Ivan Pavlov told that the experts had concluded that approximately one third of the documents that allegedly were confiscated at Pasko’s flat did contain state secrets. – The experts were however, not able to substantiate this conclusion, which is both self-contradictory and without legal foundation, Pavlov said. When we pointed out this they could not give a single argument that could justify their conclusions.

Throughout the interrogations, it became clear the main legal foundation for the experts’ conclusions are the secret decree No. 055 issued in August 1996 by the Ministry of Defence. The commander of the expert brigade, Mr. Repin admitted that they were aware of the prohibition in Article 15 (3) Constitution against using secret legislation as normative acts in criminal cases, but they had still decided to use decree No. 055. This led one of the judges to ask: – Comrade expert, you have prepared the guillotine, so please tell the Court why you have used this normative act, despite the fact that it is not officially published in accordance with the demands of the Constitution?

The expert was not able to give any other answer than to turn the pages of their 48-page report and shrug his shoulders, while his glance roamed insecurely around the courtroom. 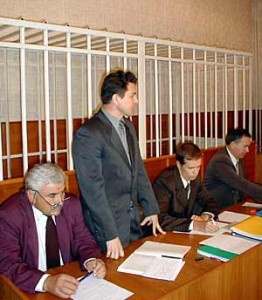 Blame it on the computer
After the court session on September 20, Pavlov’s judgment was even more devastating for the experts. – Today the experts showed their complete incompetence and lack of profesionalism, he said. They have neglected not only the Constitution, but also the law on state secrets. According to Pavlov, nothing of the alleged ‘secret’ items of information that the FSB claim to have confiscated at Pasko’s flat is covered by article 5 in the law on state secrets, which together with article 7 of the law, give the main guidelines for which items of information that pertains to state secrets according to Russian legislation.

Throughout the interrogations one of the experts had to admit that they perhaps had overused decree no. 055. Also a few other mistakes were admitted, like when Pavlov referred to one of the Bellona-reports on the nuclear waste problems in Nortwest Russia, and then quoted a ‘secret sentence’ from one of the documents that apparently were confiscated at Pasko’s flat. – I asked the expert why they had concluded that the sentence contains secret information, and the expert did actually acknowledged that their opinion on this issue was nothing but nonsense, told Pavlov.

In general the experts’ willingness to admit mistakes was however, close to zero. They tried to defend their position with all possible and impossible means, and seemed to put much of the blame for the errors and ‘inaccuracies’ in their report on the computor they had used. The machine was claimed to have had considerable technical problems when their evaluation was carried out.

According to one of the provisions in decree No. 055, any item of information on losses of and defects on military equipment in the times of peace, pertain to state secrets. Thus, given that the said computor was military property, the experts at this point actually came quite close to disclose ‘state secrets’ themselves …

– I pity the poor experts
At the end of the interrogations, defender Anatoly Pyshkin said that the experts had no knowledge regarding the questions they had tried to answer. – To be able to give proper answers, one needs knowledge both in scientific and juridical issues, which they simply did not have. Now and then the Court handed the experts a straw, which they grasped at. But they were never able to hang on.

– Throughout our examinations, it was actually difficult not to pity the poor experts, said Pyshkin. They are grown men, military officers, and there they stood blushing, almost with tears in their eyes, like stuttering schoolboys who had not done their homework. This happened almost every time we asked them a question. Sometimes both the judges and we had problems with holding back our laughter. So, when we declared that we had no more questions, the whole brigade of experts heaved a sigh of relief.

Still much at stake
Although the expert interrogations did not lack comical moments, Aleksandr Tkachenko of the Russian Pen-club, who participates in the trial as Pasko’s ‘public’ defender, underlined that the core of the case is not at all laughable. – The interrogations were depressing. They disclosed how determined the FSB, the procuracy and the fleet, probably on an order from Moscow, have been in their attempts to get Grigory convicted.

– The experts have signed a document, which apparently contains their conclusions, but each time they were asked a question they seemed to have no idea of what they were talking about, continued the human rights advocate. After having listening to the experts, I understand why we have so many disasters in our country, why submarines sink. – The experts who have been here are only concerned with accusing people so that they can protect themselves, and this time they have chosen Grigory Pasko.

*****
Grigory Pasko was arrested in November 1997 on charges of espionage on behalf of the Japanese TV-station ‘NHK’. He was acquitted of espionage in July 1999, but convicted of abuse of his official authority and freed under a general amnesty. Seeking a full acquittal, Pasko appealed the verdict, but so did the prosecution, insisting he was a spy. The Military Collegium of the Russian Supreme Court cancelled the verdict in November 2000, and sent the case back to Vladivostok for a re-trial. The re-trial started on July 11, 2001. If convicted as charged, Pasko may face up to 20 years of forced hard labour.