Throughout the interrogations of the state secret experts in the Pacific Fleet Court, Pasko’s defence-team managed to disclose the narrow-minded idiocy of the experts. 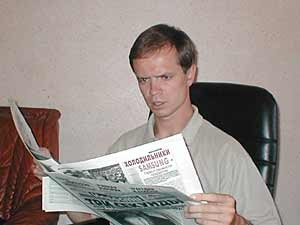 Before the start of the expert interrogations, defence attorney Ivan Pavlov promised that he would go hard on the experts. – Their conclusions are the work of narrow-minded idiots, and my intention is to disclose that before the eyes of the judges, he said. At the end of the interrogations, his tactics seems like a success.

— We need our own lawyer
While the prosecutor only used 20 minutes on the experts, since his tactics seem to be to fall back on the indictment and pray that the Court will not evaluate its content under a critical light, the defence made the experts subjects to heavy cross-examination. In court sessions that have lasted almost 12 hours each day, the defence has questioned both the competence and the methods of the experts.

This seems to have taken them by complete surprise. At the end of the second day of interrogations one of the experts, Mr. Poryadny, threatened Ivan Pavlov physically. One of the more meek experts seemed to be content with getting himself a lawyer, so that he could ‘defend the stance of the experts in Court’. Judge Dmitry Kuvchennikov had to explain him that since they are experts, they are not supposed to have lawyers. Thus, the defence’s point that the experts have no competence in carrying out the kind of legal evaluations as they actually have carried out, could hardly have been better illustrated.

The lawyer and the expert
One of the highlights of Pavlov’s examination was when he read the first sentence of the expert’s evaluation, where it is stated that the evaluation is based on the Russian Constitution. Pavlov asked which articles of the Constitution the experts had used. The question lead to the following exchange of words between the lawyer and the ‘expert’:

– But still the main legal instrument for your evaluation is decree No. 55 of the Ministry of Defence?

– Well, read Article 15 (3) of the Constitution. The decree was supposed to be published.

– The decree was published (at this stage, the expert held up a red covered booklet).

– No. It is classified as a state secret.

– I have no further questions, your honour

— We classified vacuum
The above-referred episode was quite representative for the course of the interrogations. On September 20, one of the experts quoted the following sentence from their conclusion: "The defence team has previously said that we have classified air. The air, it contains some elements, though. What we did, was to classify vacuum".

The quotation is related to a questionnaire that Pasko used when interviewing various navy officers. It was confiscated at his flat and sent over to the experts for evaluation. Both the previous and the present experts concludes that if concrete and detailed answers are given to the questions brought up in the questionnaire, state secrets could be disclosed. However, the case files are not even close to indicate that any such detailed and concrete answers actually were given, and they do not discuss who would have disclosed the secrets if that had been the case.

Thus, much can be said about the experts, but one has to give it to them: They are quite right when they say that they have classified vacuum

More to come
The interrogations of the experts were concluded on September 21. Next week the Court will carry out various obligatory exercises. It is then expected to take a break until October 15, when the experts who have evaluated whether it is Pasko who talks on the FSB’s tape recordings of his telephone conversations or not. Although Pasko says that it is him who does the talking, an expert evaluation of tapes is still needed according to the Russian Criminal Procedure Code. If not the Court’s examination of the case would be incomplete.

*****
Grigory Pasko was arrested in November 1997 on charges of espionage on behalf of the Japanese TV-station ‘NHK’. He was acquitted of espionage in July 1999, but convicted of abuse of official authority and freed under a general amnesty. Seeking a full acquittal, Pasko appealed, but so did the prosecution, insisting he was a spy. The Military Collegium of the Russian Supreme Court cancelled the verdict in November 2000, and sent the case back to Vladivostok for a re-trial. The re-trial started on July 11, 2001, and may continue until the far end of October.