The interrogations of the experts on state secrets have started in the Pacific Fleet courthouse. A confident defence-team is ready to question the experts’ independence and competence, as well as their methods. 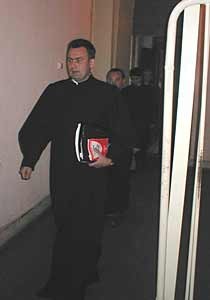 The experts from the 8th Department of the Russian Ministry of Defence (MoD) arrived in Vladivostok on August 29. Their task was to evaluate whether there are state secrets or not in the documents that allegedly were confiscated at Pasko’s flat in November 1997. The commander of the eight men brigade from the MoD, Mr. Repin, read their 47-page conclusions in Court on September 14. The Court’s interrogation of the experts started on September 19 and is expected to continue for several days.

Defence attorney Anatoly Pyshkin said that the conclusions of the experts were more or less as the defence had expected. The experts are strongly connected with the FSB and have no legal competence, but still they have answered questions of a legal nature. — It is quite obvious that the experts, who never have carried out a similar evaluation before, have been guided by a ‘bandmaster’ who have helped them with their conclusions, Pyshkin said.


The expert brigade’s main legal instrument when carrying out their evaluation has been the infamous secret MoD decree no. 055:1996. On September 12, 2001 the Russian Military Supreme Court ruled that this decree must be published and brought in accordance with the Russian Constitution and other federal laws.


This may have led the experts to reduce the number of state secrets in the allegedly confiscated documents compared with previous expert evaluations of the same documents. The methods of the experts do however, remain the same. Thus, their conclusions are nothing but the ‘same shit, in new wrapping’.

— The experts’ approach is extremely formalistic, said Pyshkin. They have put on their blinkers and used the MoD decree, without paying much attention to other legislation or to the fact that the ‘secret’ information already is available in the public domain. — One of the main questions for the Court will therefore be to decide whether or not an item of information that already is well known to the public still can be a state secret.


According to the experts, the documents do for instance reveal ‘the real names of military units’, which in their eyes are a state secret. — But turn on the TV any day, and you will see that in most reports related to the armed forces the real names and numbers of our armies, divisions, battalions and fleets are revealed by the officers of these units, Pyshkin said. — If one follows the logic of the experts those officers should be prosecuted for disclosure of state secrets, which would seriously affect our defence capacity as our officers then would be busy standing trial all the time, commented the lawyer sarcastically.

One of the other alleged ‘secret’ items in the case is a drawing of a sketch of a technical navy base, which indicates where spent nuclear fuel is stored. Throughout the trial a number of officers have said under oath that the sketch is indistinct, outdated and not in accordance with the reality. Moreover, several open sources give an accurate and detailed overview of the base. — For the experts these facts are irrelevant, said Pyshkin. In their eyes the indistinct and outdated sketch still reveals state secrets.


The former military prosecutor turned defence attorney also referred to the fact that a MoD research institute has published a report with detailed information on the base. — The defence asked for the report both from the headquarters of the Pacific Fleet and from the base itself, and we got it, but in both editions the page containing a detailed map of the base was removed, Pyshkin said. It is obvious that somebody wants to prevent the Court from discovering the truth in this case.

The defence has prepared many questions for the experts, although it does not expect them to withdraw their conclusion. Nevertheless, the defence is calm and confident before the ‘battle’ with the experts.


— Our main purpose with questioning the experts is to underline that the evaluation of the question whether there are state secrets or not in the disputed material must be done by the Court and not by the experts, said co-defender Ivan Pavlov. The experts’ conclusions do not prove that any of the disputed documents in the case contains state secrets. Besides, there is nothing in the case that proves that the documents actually were confiscated at Grigory’s flat, there is no information suggesting that he collected them with the purpose of handing them over to anybody, or that the documents actually were handed over. — Thus, we have a strong position, added Pyshkin.

Journalist Grigory Pasko was arrested on November 21, 1997 and charged with espionage in favor of the Japanese TV-channel NHK. At his first trial in July 1999, he was acquitted for espionage, but in stead convicted for ‘abuse of his official authority’ and released under a general amnesty. After appeals from both sides, the Military Supreme Court cancelled the verdict on November 21, 2000, and sent the case back to the Pacific Fleet Court for a re-trial. The re-trial started in Vladivostok on July 11, 2001.