Prosecutors to check greens, but the groups strike back 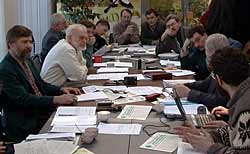 The very same day as Oleg Bodrov, leader of the Green World association, was travelling into St. Petersburg from his home in the closed nuclear city of Sosnovy Bor he received a message that his group was under investigation by the local prosecutor office. Bodrov was not the only one on his way to St. Petersburg that day. Green leaders from all over Russia were meeting together with the major human rights groups. The aim was to establish a new coalition that would strengthen the work of the greens and protect their rights to exist in the new anti-green climate waving over Russia.

Two of the initiators of the new coalition know perfectly well the need to stand together – Bellona’s co-worker Aleksandr Nikitin and navy journalist Grigory Pasko. From Murmansk in the north to Vladivostok in the east they both documented the negligence of the Russian authorities regarding nuclear waste. For their work, they were both charged with high treason and did their time in custody being arrested by the Russian Security Police, or FSB.

Prosecutors’ specific target
Oleg Bodrov was neither the only one who got troubles with the prosecutors. The reports about the campaign launched by the General Prosecutor Office has been coming from different envirogroups the past two weeks. The local prosecutors have no sensible explanation, why the environmentalists became a specific target.

The investigator from the local prosecutor office told us she simply was ordered by the General Prosecutor Office to look into what we were doing, Bodrov says to Bellona Web. His organisation has been the local watchdog to the Leningrad nuclear power plant, located in Sosnovy Bor.

"This is a targeted campaign," says to Bellona Web Ivan Pavlov, one of the Nikitin’s lawyers and the leader of the Environmental Rights Centre in St. Petersburg. "This is not a regular practice when the General Prosecutor Office start verification of a certain group of organisations Russia-wide. Something or someone stands behind it, and the campaign seems to have a certain purpose which is still not clear for us," adds Pavlov. 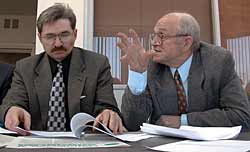 United against harassment and for better society
Present at the meeting in St. Petersburg, leaders of environmental groups from Irkutsk, Chelyabinsk, Tomsk, Karelia and Moscow agreed on the need to work with human rights organisations. In the early 90-s, we all believed working with environment would become easier, today we can see that all environmental rights are violated. Russia’s way into a civic society has encountered roadblocks, says Alexey Yablokov, who chaired the St. Petersburg coalition meeting.

The human right groups Citizen Watch in St. Petersburg and Ecojuris from Moscow welcomed the initiative from the greens. The new millennium starts as a pre-perestroyka time in our country. If an environmentalist cannot work freely, nobody in our society will get a warning message about ecological catastrophes, and all inhabitants of Russia will lose eventually, says Boris Pustintsev, leader of Citizen Watch.

Ecologists need access to information in their work. Today, Russia lack a sufficient legislation that can provide such rights, and we need to work together with the State Duma to improve the laws, says Ivan Pavlov, outlining one of the goals of the new coalition.