Newly freed from prison, ecologist Vitishko says he wouldn’t have changed a thing

Yevgeny Vitishko, the man who has served arguably the longest sentence on record for supposedly spray-painting environmental graffiti on a fence, told Bellona in his first post-prison interview that he’d do it all over again.

Published on January 6, 2016 by Charles Digges 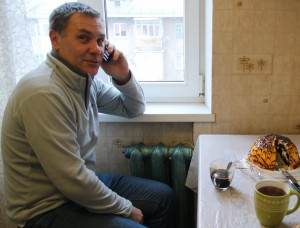 Yevgeny Vitishko, the man who has served arguably the longest sentence on record for supposedly spray-painting environmental graffiti on a fence, told Bellona in his first post-prison interview that he’d do it all over again.

Vitishko, a 42-year-old geologist, was ensnared in the Kremlin’s machine to crush dissent against its prized 2014 Sochi Winter Games when he and his organization, the Environmental Watch on the North Caucasus (EWNC), revealed massive corruption and environmental abuses behind the $51 billion Olympics – by far the most expensive in history.

He and his group are compiled a conclusive report tallying the damages wrought on the Black Sea coast by the Sochi Olympics which will add to the 2014 report and come out in 2017, he said.

“They wanted me out of the way: I raised inconvenient questions – jail was inevitable for me,” he said. “And now I am back.”

On December 22, Vitishko received a long fought conditional release from the Tambov Region’s Sadovaya settlement colony, and spoke to Bellona via Skype from his hometown of Tuapse, 70 kilometers Northwest of Sochi on the Black Sea coast. He had served 22 months.

He said he’s settling into his new life well. A 20-day hunger strike he mounted in prison protesting for his release threatened to wreck his health. But his clear eyes and vigorous demeanor on the screen told a happier story. 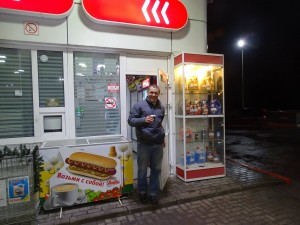 First non-prison cup of coffee in 22 months in as Vitishko and EWNC activists make their way from the Tambov prison colony to Krasnodar. (Photo: EWNC)

“So, I lost a little weight and maybe look leaner,” he said. “I drank some water each day, and you can survive on such a diet – it’s not recommended but you can do it.”

He lit a cigarette – a new habit he calls the main health effect of his stay in the Gulag.

“I picked it up the in the colony and haven’t quit,” he says. “I hope you don’t mind,” he jokes, as if it might seep through the Internet connection.

Vitishko is now living in small apartment in Tuapse, which has a population of about 60,000.

During his prison stay, his ex-wife and two sons moved away from town, though they’ve remained in touch. It’s not the first marriage he knows of to be ground to bits of the Kremlin-led campaign against its environmental critics.

“I’d been active in bringing to light the environmental devastation and corruption in this area since 2007,” he said. “The surveillance, pressure and fear surrounding that in Russia is often, unfortunately, not very good for families.”

In more encouraging developments, he said he and his girlfriend Lena Shmakov had become engaged, though haven’t yet set a date – something that’s not possible under the circumstances of his conditional release.

It was defining these circumstances that led to Vitishko’s release being pushed back by a month from his original release date of November 21. Prosecutors demanded he be sent to the town of Slavyansk-na-Kuban near the Ukrainian board, where he lived for 20 years.

But the Tambov Court rejected that, and let him return to Tuapse, where his friends and work are.

Even then, the local parole office tried to create difficulties. When his colleagues from EWNC brought him home, Tuapse’s parole board said they’d received no orders to put him on their records – and with no parole officer, he’d have to be returned to jail. 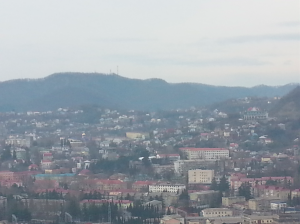 But the snafu – intentional or not – was untangled.

Vitishko said “it was one last attempt to put me back behind bars.”

For now, he is restricted to living only within Tuapse, though he is allowed to leave if he secures permission to travel to other locales in Russia three days in advance of his departure.

He said he’d been to Sochi three times since his release, so there are no orders, it would seem, to keep him under a bell jar.

He’s won’t be allowed to leave the country for another year and two months, when his parole ends. But he says he has no plans to do that on any permanent basis.

Still pulling for Russia to improve

“It’s hard for a lot of people to understand this, but I am still a patriot,” he said. “We don’t chose our motherlands, but I was born here, I love my country and I don’t plan to run away from it.”

Too many people in the environmental movement, he says, have.

“So that is leaving fewer and fewer of us to deal with the critical questions – you can’t fight this fight in self-imposed exile.”

He said that now, more than ever since he’s been released, it’s important to show that the government was not able to crush he and his colleagues resolve to bring to light the environmental fiasco caused by the Olympics.

“I can barely leave the Krasnodar region but that’s fine,” he said. “This is where my work needs to be done, and this is were we need to show the corrupt officials that they can’t silence us.”

The fence he served hard time for defacing still surrounds the summer home of Alexander Tkachyov, Russia’s current Minister of Agriculture who in 2014 oversaw preparations for the Sochi Olympics as governor of the Krasnodar Region. 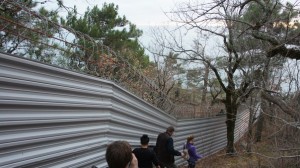 Tkachyov’s palatial mansion was on of dozens of sweetheart real-estate trophies built on protected lands handed out by the Russian government to Olympic boosters – among them President Vladimir Putin himself.

The small 2011 demonstration at the fence led by Vitishko and Suren Gazaryan, his colleague from Environmental Watch on the North Caucasus, was, said Vitishko on Monday was meant to expose the corruption that became rampant in the Olympic preparations.

“And I got targeted and arrested for it,” said Vitishko. “ Suren and I were hitting uncomfortably close to home for the powers that be and they wanted to shut us up.”

Both Vitishko and Gazaryan were slapped with two year suspended prison sentences for their supposed involvement in defacing the fence, something both men and witnesses interviewed by Bellona said neither of them did.

The two men appealed the suspended sentence as disproportionate to the crime. In the meantime other charged mounted against Gazaryan and he fled the country for political asylum in Estonia.

Vitishko was left alone in Russia to appeal the suspended sentence. On February 14, 2014, in the heat of the Olympics, the Krasnodar Regional court denied the appeal and handed down the three-year custodial sentence. 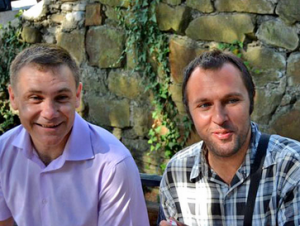 Gazaryan later moved from Estonia to Bonn, Germany and won the Goldman Environmental Prize for his work with Vitishko, which he told Bellona at the time he accepted with great ambivalence.

Vitishko and Gazaryan have talked on the phone many times since his release, and he bears Gazaryan no hard feelings. He’s proud of his friend’s success at building a new life in Germany and is sensitive to the sacrifices he made when he left – a marriage and a relationship with his two daughters.

“I wish Suren could come back, but legally that’s impossible for him,” said Vitishko. “He was sentenced to the same term I was – it’s not worth it for him to sit three years in jail to come home.”

There is nothing to change

Looking back over the five years since what locally became known as the “fence incident” he said he wouldn’t change a thing.

“Five years later and on the other side of the [prison] colony, of course I would lead the protest again,” he said. “Eventually they would have concocted another charge to jail me – my only job was to continue the work we had started.”

For now, continuing that work means documenting illegal clear-cutting of forests near Tuapse for the construction of the controversial Kerch Strait Bridge linking Ukraine’s Crimean Peninsula – which was annexed by President Vladimir Putin almost immediately following the Olympics in March 2014 – to the Russian mainland near Vitishko’s home.

The Crimean annexation was the first stone in a volley of military incursions into Ukraine by Russian forces, which continue to lead a blood-soaked separatist insurrection in Ukraine’s industrial East.

Illegal land use for the Kerch Strait Bridge is obviously another hot-button political issue over which the Russian government is unlikely to tolerate environmentalist flack for – but into which Vitishko immediately jumped.

His social media posts less than five days after his release featured him and other members of EWNC sleuthing out the environmental malfeasance.

“Whether they want to hear it or not, they’re going to,” said Vitishko. “Once again there’s illegal logging and destruction of protected lands. The battle begins again.”