KRANSNAYA POLYANA, near Sochi, Russia – Of all the continuing environmental metastases spawned by Sochi’s hosting of the 2014 Winter Games, one of the more subtle is natural gas giant Gazprom’s encroachment on UNESCO World heritage sites as it expands its crony executive ski lodge, Laura.

Published on November 9, 2014 by Charles Digges 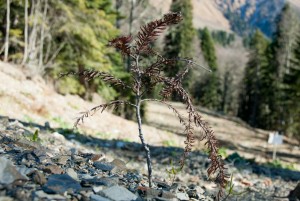 KRANSNAYA POLYANA, near Sochi, Russia – Of all the continuing environmental metastases spawned by Sochi’s hosting of the 2014 Winter Games, one of the more subtle is natural gas giant Gazprom’s encroachment on UNESCO World heritage sites as it expands its crony executive ski lodge, Laura.

The move is evidence that the corruption, rapacity and environmental butchery accompanying the Games hardly ended when the Olympic torch was extinguished at Fisht Stadium –itself looking somewhat green around the gills from neglect eight months on.

From the look of things at the mountaintop resort on this warm Sunday sunny, the sprawling, snowless ski complex is continuing to take advantage of shabby Russian environmental legislation – watered down even further by the Olympic drive – and cast its tendrils into a Caucasus nature reserve on the sly.

Ski lifts and gondolas clothesline Gazprom’s mountain peak, which stands across a valley from Sochi 2014’s ski runs. The lifts themselves might offer some view of the breathtaking panorama of the Caucasus’s snowcapped peaks were it not for the assaulting Russian pop music blaring through tinny bullhorns affixed to the stanchions, shattering any peaceful communion with the timber line. Spools of high-tension cable and piles of bulldozed dirt further remind you that you’re in the middle of an active construction zone, still, a year after Sochi’s famously underprepared opening. So, if you’ve come to cut a swathe through power snow, as the Kremlin promised tens of thousands of new tourist would annually, it’s clear you are in the wrong place.

The construction puts in the path of a wrecking ball the Caucasus State Biosphere Reserve – a “reserve” being the highest distinction Russia can give an area of natural preservation – one that is supported by reams of laws forbidding it be disturbed, even in cases when human intervention might be beneficial.

The reserve covers thousands of square kilometers along the Black Sea coast, but canny legislative shenanigans leading up to the Olympics saw much of the reserve reduced to the status of national parks, where construction is allowed.

The reserve’s status as a UNESCO World Heritage site will also likely be stripped should Gazprom’s build out continue.

Actually, it could easily loose its status now.

According to statues guiding the natural preservation of a World Heritage site, a buffer zone of at least a half a kilometer between the man-made and the wild must be observed.

Further evidence of Gazprom’s ongoing plans to seize the territory is found within the reserve itself: More bulldozer tracks lead to a deforested flat where towers for gondola cables could eventually be built. Yulia Naberezhnaya of the Environmental Watch on the Northern Caucasus (EWNC), who accompanied Bellona to the Gazprom resort and its expanding boundaries on Sunday theorized that this clearing would have served to string up more gondola cables before the Olympics had attention to Sochi 2014’s abysmal environmental record not become such a media flashpoint during the Games – a flare EWNC was responsible for firing with a scathing report compiled over the seven years prior to the arrival of the Olympic torch.

“The lifts would have continued right up the mountain through the reserve,” Naberezhnaya said, pointing to the sunbathed mountainside on this, the eighth day ski season. ”But because world media was keen to report on the Games’ environmental circumstances, Gazprom likely figured it would wait until the publicity died down to continue building.”

Apparently, that day is rapidly approaching.

Naberezhnaya and a handful of other EWNC members make regular ascents up Laura’s mountain to examine conditions and determine whether further construction has occurred. On Sunday, another source in EWNC called Naberezhnaya to tell her that he established road construction well inside the nature reserve had begun. Gazprom, said Naberezhnaya, has also conducted studies on the mountain peaks’ highest snow coverage, which is shrinking yearly thanks to climate change. But the company is hunting for skiable snow, meaning the lifts will web further up the peaks and down the other side, lashing the wild mountain to civilizations discontent with staying put.

Camp against construction unlikely to succeed

Should EWNC’s next forays up to Laura reveal more violations of the reserve, the group will issue an all points bulletin to the local environmental community to set up a camp to prevent construction machinery from moving forward. But expectations are limited.

“There aren’t any legal paths we can take in court,” she said. “We can only set up a camp and hope – and it might only last a few hours before it’s broken up – it’s a desperate situation, but it’s all we can do.”

Gazprom could not immediately be reached for comment about its further plans for its resort, and the skeleton crew of workers manning the gondolas and administration would offer no clues, but to Naberezhnaya, the evidence she showed Bellona speaks for itself. “Unfortunately, I think Gazprom will continue to build,” she said.

But, there is one hope Naberezhnaya is holding onto that could possibly siphon the billions in federal funding Gazprom is willing to spend on felling the Caucasus reserve.

That, suggested Naberezhnaya, could be the construction of a new bridge between the far western part of Russia’s Krasnodar region, where Sochi is located, and the city of Kerch in Crimea.

One consequence of the Crimean crisis was the loss of Putin’s dream to not only morph Sochi into a center of international sport, but diplomacy as well. The city was scheduled to hold this year’s G-8 summit, but leaders boycotted the event and de facto exiled Russia from the group of industrialized nations. Mandatory efforts to compensate for what Laura has already taken in its expansion are meager. Between the muddy erosion ditches and fallow ski slopes lies what’s called a compensation zone – an area where the company was supposed to make an attempt at reforestation.

But what seedlings that have been planted are flattened to desiccated skeletal twigs by workers’ boots, construction machinery and a steady avalanche of construction sludge oozing downhill from the gondola station.

“It’s a cynical effort at best,” said Naberezhnaya. “What we should be seeing is actual trees – these are sprouts through cracks.”

Gazprom’s Laura resort has long been a retreat for the company’s executive elite – albeit somewhat more difficult to reach until the Olympic winds filled its sails with monetary favors and gargantuan infrastructure laid across Sochi National Park.

Vladimir Putin’s enthusiasm for his $51 billion Winter showcase – the most expensive Olympics in history – was contagious among Russia’s upper crust and his dream of turning Sochi into a world class tourist and sports destination left plenty of blank checks for companies like Gazprom to snatch up for themselves.

Criticism of the Soviet-scale national project was not tolerated, as witness EWNC activist and report co-author Yevgeny Vitishko’s three-year imprisonment – to say nothing of the ongoing gauntlet what’s left of the organization is running. Far beyond the punishment meted out by Russia’s infamous “foreign agent” law for NGOs, EWNC has been branded traitors and extremists by the Russian government, Naberezhnaya told Bellona.

Surveillance of its members is nearly constant, and many have left because of the pressure. Encounters with international media are handled via layered chains of contact. The extent to which the Russian government prizes its Sochi vanity project is still considered tantamount to national defense.

And the accompanying privileges of shredding environmental legislation and continuing Moscow’s yellow brick road to environmental anarchy extend to the Kremlin’s closest friends and business partners.

But for all the promise of future billions to be made from supposed world class skiing venues like Roza Khutor, the Alpine skiing venue of Krasnaya Polyana, and the projected allure of Laura, the Marriott’s, Radissons, and Ritz Carltons turn darkened window sockets to passerby.

“What is so weird about this whole enterprise it is that there’s no one here,” said Naberezhnaya. “The hotels barely run at a capacity that allows them to pay their electric bills – the only thing expanding the Gazprom complex will do is waste more money and destroy more nature.”

The ghost town effect was noted Nils Bøhmer, Bellona’s managing director, who is also in Sochi.

“What seems clear is that Gazprom is continuing an anarchic march against nature to no apparent purpose now that attention has strayed from the Black Sea’s environment, despite any commerical logic,” he said.

As the sun-stretched rippling shadows across the peaks of the mountain, postponing yet again any hope of snow, the only visitors besides Naberezhnaya and Bellona were a smal group of people enjoying a simple picnic and the view, locals from Sochi who had no need of overpriced hotels and their echoey corridors.

”We’ve been coming up here for years for the silence and the trees,” said one, who identified himself as Alexei. ”It doesn’t sem like that will last much longer.”