The whereabouts of Yevgeny Vitishko, the ecologist and geologist whose outspoken opinions against the environmental destruction caused by the Sochi Olympics earned him a three year penal colony sentence again remain unknown after he was Monday moved from a remand prison in Krasnodar.

Published on February 26, 2014 by Charles Digges 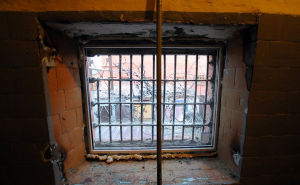 View from inside Tuapse's jail house, where Vitishko spent part of his incarceration. (Photo: EWNC)

The whereabouts of Yevgeny Vitishko, the ecologist and geologist whose outspoken opinions against the environmental destruction caused by the Sochi Olympics earned him a three year penal colony sentence again remain unknown after he was Monday moved from a remand prison in Krasnodar.

Meanwhile a court yesterday handed out a 4-day administrative jail sentence to anti-Olympic activist David Khakim and a 1000 ruble ($27) fine to Olga Noskovets, who is a member of Vitishko’s beleaguered Environmental Watch of the North Caucasus (EWNC) group, which has been a target of nearly constant legal harassment over its efforts to bring environmental violations surrounding President Vladimir Putin’s signature Olympian dreams to light. Anna Mitrenko of the Public Monitoring Committee, a prisoners’ rights group affiliated with the Presidential Council for Human Rights told Bellona by telephone from Krasnodar that it will likely be some days before the 40-year-old Vitishko’s location is again public record.

When visited on Friday his Krasnodar-based lawyer Marina Dubrovina – who told Bellona he was being held in a unit in the jail for “especially dangerous criminals” – Dubrovina and Mitrenko both confirmed that Vitishko was suffering from a serious cough and had been denied medical attention and medicine.

Vitishko’s location could be unknown for some time

“Our inquiries reveal that Vitishko has been sent from Krasnodar remand prison No 1 to a penal colony outside the region,” Mitrenko told Bellona Wednesday. “I can’t tell where he is going at the moment because, by law, only Vitishko can disclose his whereabouts in writing to those he wishes to notify,” she said, and that procedure will likely take a week or more. The Krasnodar remand prison where Vitishko was being held until Monday.

Mitrenko confirmed that prison officials had told her that Vitishko done just that, and sent letters to those who would be concerned about where he is being held.

But she said that prison officials were not allowed to disclose to whom those letters went.

“Typically, during the process of prison transfers, one would be told to write to one’s lawyers, relatives and supporters,” she said. “But it’s not communication by email or telephone, it’s all written and handled by the Russian post, which is very slow.”

Popkov told Bellona by email that he had not yet received the letter from Vitishko, and was futher unsure that he would.

“I don’t know where Zhenya (Vitishko) is,” he wrote. “The courts and the authorities are making a point of not telling us. The letters to me and to friends or relatives have not arrived .”

Suren Gazaryan, Vitishko’s EWNC colleague and friend, who fled Russia for political asylum in Estonia as one after the other absurd legal charge for his environmental work surrounding the Olympics mounted, also wrote with concern.

Vitishko’s case shed a daming international light on the Sochi Olympics and the International Olympic Committee. Human Rights Watch, the Norwegian Helsinki Committee, Bellona, and Amnesty International have all publicly denounced his imprisonment. Yevgeny Vitishko in Tuapse at the end of January. (Photo: Charles Digges)

Amnesty International has declared him a Prisoner of Conscience.

During the Games, Norwegian Prime Minister Erna Solberg reportedly gave her counterpart Dmitry Medvedev such an uncomfortable lecture on Vitishko’s imprisonment and Russia’s poor record of observing human rights in general that he refused to appear in a scheduled joint appearance with her after their closed door meeting.

Vitishko’s second disappearance since he his appeal against a three-year penal colony sentence in the Krasnodar court was overturned became known when the EWNC’s Anna Mikhailova tried to deliver a parcel to Vitishko on Monday, the day after the Olympic’s closing ceremonies. Mikhailova was curltly told Vitishko was no longer being held at the jail.

During the course of the Sochi Games, Vitishko has his appeal against a three-year penal colony sentence for spray-painting a fence located on protected lands in 2011 overturned by Krasnodar court judge Andrei Konov. Vitishko was also jailed between February 3 and 18 on trumped up charges of public swearing and held in his hometown jail of Tuapse, 70 kilometers northwest of Sochi, to keep him away from Western media as well as from attending his appellate hearing in Krasnodar.

Though he was supposed to be freed on the February 18 to say goodbye to his family before turning himself over to penal colony officials, he was instead secretly sent to the Krasnodar jail via an illegal order signed by judge Konov who overturned his Krasnodar appeal.

Under that new order – which Popkov told Bellona on Friday was illegal because it was issued in his absence – Konov stipulated that Vitishko should be transferred to the as-yet-unknown prison colony under armed guard, instead of his initial ruling that would have allowed Vitishko time to say goodbye to his wife and two sons and collect his belongings.

The detention of EWNC’s Noskovets and independent activist Khakim took place on February 23, the closing day of the Olympics. They spent nearly two days in police custody before their case was heard.

Both activists were found guilty by judge Olga Maslakova of not obeying police orders when they were separately swept up at a bus stop in Sochi’s Khosta region on Sunday.

Both activists had also been instrumental in assisting Nadezhda Tolokonnokova and Masha Alyokhin, members of the recently amnesties Pussy Riot punk feminist collective, during their visit to Sochi last week. Tolokonnikova and Alyokhina were famously whipped and pepper sprayed by Cossack militiamen, when they attempted to play their new protest song, “Putin will Teach You How to Love the Motherland” which they dedicated to Vitishko and other of Russia’s political prisoners.

The difference in sentences for the activists, said EWNC’s Andrei Rudomakha from Krasnodar, was due to several attacks of acute asthma Noskovets experienced while in custody.

“This must have played a role in softening her sentence,” Rudomakha said. Khakim announced at his arrest that he would go on a hunger strike, but his lawyer, also Popkov,  said that he has given up on it for health reasons.

Meanwhile, Popkov, referring to a three week long disappearance of Tolokonnokova while she was being transferred from one prison colony to another – during which neither her relatives or lawyers were informed of the switch – said a long silence from Vitishko is liklely.