The whereabouts of environmentalist Yevgeny Vitisko, who last week had his appeal against serving three years in a penal colony for spray-painting a fence tuned down, remains officially unknown after authorities apparently sneaked him out of his hometown jail in the Black Sea town of Tuapse, some 120 kilometers northwest of Sochi.

Published on February 19, 2014 by Charles Digges 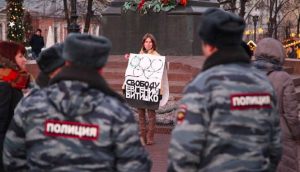 The whereabouts of environmentalist Yevgeny Vitisko, who last week had his appeal against serving three years in a penal colony for spray-painting a fence tuned down, remains officially unknown after authorities apparently sneaked him out of his hometown jail in the Black Sea town of Tuapse, some 120 kilometers northwest of Sochi.

He is apparently in a detention center in Krasnodar, the capital of the region holding the Olympics, but his lawyer, Alexander Popkov, has yet to obtain any official confirmation of that.

The two were released without charge, but during their detention, Tolokonnikova told Bellona via her mobile telephone that the high-profile duo had been hauled in by police as part of an effort to distract from correctional officers’ legerdemain with Vitishko. The group was later on Wednesday attacked by security forces who whipped them and sprayed them with pepper spray, when they tried to perform a song that is, in part, dedicated to Vitishko. Pussy Riot had been jailed after staging  a 40-second long guerilla rendition of their punk “hymn” begging the “Mother of God” to “chase Putin out” at Moscow’s Christ the Savoir cathedral in February  2012.

They were amnestied by President Vladimir Putin in December  – a move Tolokonnikova herself denounced a “cosmetic gesture” to distract from the ecological and human rights abuses taking place in Sochi minutes after being freed from a Siberian work camp.

Vitishko has been a vocal critic of the ecological devastation wrought on the North Caucasus region as a result of the Sochi Olympics, and co-authored a report detailing the long-term environmental effects of the games.  This, say activists and his lawyer, hung a target on his head as Putin, by any means necessary, insisted on staging his Olympic show of the “modern Russia.”

The environmental report is currently available in Russian, but the English translation is expected by next week.

Lawyers have not been told where their client is

“From what I can tell, Yevgeny was transferred early yesterday to Krasnodar, but that is all we know,” said Popkov by telephone this morning. “I have not spoken to anyone who has seen him and though he is rumored to be in a local remand prison, we have not been informed of which one.”

The Environmental Watch on the North Caucasus (EWNC released on it’s twitter feed later in the day that an official with the local corrections administration who identified herself as Anna Mitrenko, had said that “all was normal” with Vitishko and that he is currently being held in Krasnodar’s remand jail.

Marina Dubrovina, Vitishko’s legal counsel in Krasnodar, however, said she has not been able to establish if Vitishko is in fact located in that detention center.

She told Bellona that the lines of people trying to locate detained relatives, friends and clients were extremely long.

Vitishko was supposed to have returned home yesterday on his own recognizance to say goodbye to his wife, two sons, and collect clothing and other affects, and turn himself over to penal colony officials to begin serving the three year sentence upheld by the Krasnodar appeals court on February 12.

That plan was illegally scuttled, however, when Vitishko failed to be released from the Tuapse jail at the scheduled time of 1:20 pm local time.

According to Popkov, Vitishko seems to have been spirited out of Tuapse illegally and “with total disregard for what the court had ordered.” Vitishko had been serving a so-called administrative sentence of 15 days at the Tuapse jail for swearing in public, an accusation leveled by him in writing by two anonymous witnesses that neither Vitishko nor his lawyer were allowed to confront during the rushed February 3 proceeding to jail him.

Until December 21, Vitishko had been serving a three-year suspended sentence and probation for supposedly spray-painting on a construction fence, surrounding the mansion of Krasnodar Regional Governor Alexander Tkachev, in a protected nature area. The suspended sentence was handed down in June of 2012.

On December 21 – the day Pussy Riot and other political prisoners were amnestied – Vitishko appealed the three-year suspended sentence against him as disproportionate to the crime – which he, other activists and Bellona say he did not commit.

Instead of granting the appeal, the Tuapse court converted the suspended sentence to a custodial one.

Vitishko was free under a condition that he not leave town without permission until his originally scheduled appeal date of February 22.

When he was picked up on the swearing charge on February 3, he had received permission to travel to Sochi to speak with international journalists, and to help put the final touches on the Olympic environmental report with other members of EWNC.

Ramrodding Vitishko into the penal colony

After he was jailed on the swearing charge, the date for the appeal of his prison colony sentence was moved back to February 12, ensuring that he would not be able to attend the appellate hearing in Kransodar, 120 kilometers northeast of Tuapse, accept via what turned out to be an extremely poor quality video connection.

The public swearing arrest was characterized by activist Shevchenko and lawyer Popkov as a tactic to keep Vitishko out of the courtroom to speak in his own defense, as well as keep him away from western journalists. Bellona was the last media organization to speak with him before his jailing.

Popkov said that the events of yesterday seemed to bear out his working theory.

“It’s clear the authorities intended to push Vitishko straight from jail into the penal colony,” he said. “The didn’t want the possibility that he might speak with activists or well wishers, and they made him disappear into the system.”

But Popkov said that he and activists intended to find him.

“He will be given the last word sooner or later,” he said.

As the Olympics draw toward their end this Sunday, security services seem to be getting restless. Along with several more reported acts of harassment against activists of various stripes, Popkov confirmed that his new clients, Pussy Riot, were attacked by Cossack security forces wielding whips and pepper spray moments before they attempted a public performance of their new song, “Putin will Teach You to Love the Motherland.”

Tolokonnikova tweeted yesterday that the song is “dedicated to prisoners of the swamp [referring to a May 2012 political protest that turned violent in Moscow’s Bolotnaya Square], corrupt Olympics,  Vitishko and suppressed freedoms in Russia.”

According to Tolokonnikova herself, she and others in the fluid group had just donned their trademark brightly-colored balaclavas in a restaurant in downtown Sochi. They were surrounded, said Tolokonnikova, by about 12 Cossack militiamen, who are being used by local police in Sochi for security patrols.

Tolokonnikova later tweeted that “Cossacks attacked us, beat us with whips and abundantly sprayed us with pepper gas.”

Their account was backed by David Khakim, an environmentalist who on Monday was arrested and sentences to 30-hours of community service for staging a solo protest in Sochi in support of Vitishko’s freedom.

Tolokonnikova said that witnesses were questioned, but that no one was arrested.