Harish Hande providing solar power to the people in India

Some 140,000 homes across the India currently are equipped with solar panels produced by the SELCO company founded in 1995 by Harish Hande, whose philosophy is that solar energy goes far beyond being just a power technology.

Published on February 9, 2012 by Ruth Lothe, translated by Charles Digges 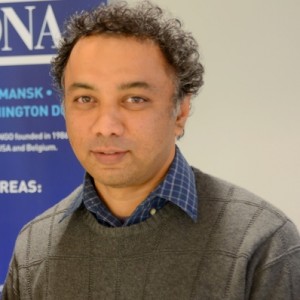 “We see that when people have access to electricity, it opens future opportunities and is an important step toward pulling people out of poverty is taken,*” said Hande during a conference on SELCO held at Bellona’s Oslo offices on Thursday during which he told of his many years experience developing solar energy business in India.

“It is incredibly inspiring and good to hear that access to energy for the world’s poorest people by no means meant an increased in use of fossil fuels,” says Svend Søyland, Bellona’s senior advisor on international energy and climate issues. “On the contrary, here is a wealth of opportunities for development of renewable energy.”

Solar power as a source

Hande’s plan is to install 200,000 solar plants to over the next three years, as there is use for small-scale development and the benefits are many:

– With electricity comes light and the possibility of using electrical appliances, elevating of living standards from day one;

– Electricity allows for study or employment after sunset, contributing to increased income;

– The need for developing alarge national power grids and transmission lines are lessened;

– Even very simple straw huts can have solar panels.

“It is not Norwegian oil and gas exports that are helping poor Indians. It is through programs like Hande’s that people can access electricity and slowly but surely emerge from a life of poverty,” said Søyland.

Breaking through the funding wall

SELCO specializes in locating financing and payment schemes to suit different people in across many economic strata.

“There is a difference between a person who receives wages every day, every month, or sells their crops twice a year. But the barrier is always funding,” said Hande.

“If funding issues are resolved, everything else can be solved,” he said, and told the story of a beggar’s wife of 60 years who came to him and asked:

“How can you help me to get a bank account? I have income sufficient to service a loan, but no bank will give a beggar a loan. They won’t even give me a bank account.”

“She has no credit, she is a beggar. I must have guarantees that the loan be repaid, at least a 40 percent guarantee is required.”

This is where Hande came in.

“We helped with a guarantee,” he said. “The woman got loans and we installed the solar system at her modest home in the slums. After the guaranteed sum was consumed, her repayment was on the skids.”

The woman received not only solar power for her home, but also a bank account, making her a participant in the Indian economy.

“Later, the lady went to the bank to borrow money for a sewing maching so she could support herself as a seamstress and leave begging on the street behind,” Hande.

SELCO has a social profile, and all profits are returned to the company. The philosophy is that access to energy is a means to pull people out of poverty, not an end in itself.

“Our motivation is to help people out of poverty, not to be leading technology company,” Hande said. “We identify and tailor solutions to each person’s needs.”

Will to pay back loans solid

The willingness of the poor to pay for solar power is certainly present, assured Hande, because solar energy is so much better than kerosene lamps and diesel generators for many reasons:

– Local pollution from fires and kerosene that causes respiratory disease is eliminated;

– Mobile phone charging is reliable, which is central to doing all manner of business;

– The population is no longer at the whim of unreliable power systems;

Terje Kronen of the Norwegian Ministry of Foreign Affairs, who attended Hande’s presentation at Bellona, asked during the questions session that followed whether such developments could be financed via micorfinancing – providing financial services to low income groups who lack access to banking services.

Hande said he did not believe so.

“A solar installations on a house is often the second most valuable thing after the house itself,” he said. “The installation of a solar plant is an investment, and not an aid to businesses directly, as microfinance is supposed to be.”

Operation within the official economy

SELCO is a much better way to lift people out of poverty than the way Indian government is doing today by subsidizing kerosene and diesel.”.

“This subsidization is an arrangement that both creates a large black economy, and is a very climate unfriendly, “ said Hande.

He emphasizes this point by illustrating how power issues are typically handled in small villages, where there is usually a diesel generator owned by one person. Others may buy power from this generator in exchange for diesel fuel. When one man buys power for five liters of subsidized diesel, the man who owns the generator holds on to four of the liters, which he in turn sells on the black market.

“The black market in India is huge,” Hande said. “We (at SELCO) focus on doing things the right way and thus contribute to a healthy economy.”

Be Hande’s guest and steal the idea

Hande’s lecture concluded by emphasizing the significance of sharing information about his business.

“We are an open organization. Nothing of what we do is secret and nor should it be – we would like others to copy us and our business,” Hande said.

“This is a form of financing for solar power which probably is well suited for poor countries, including those in Africa and South America,” he said.

“We at Bellona look forward to continuing to work with Harish Hande in the future,” said Søyland “He is a great visionary and does a lot of good by putting stone upon stone in efforts to lift people out of poverty by means of renewable energy.”

Translators note: Quotes in the artcle originally given in English have been back-translated from Norwegian and may not be word for word.