VALENCIA – Ministers and other key players from industry, politics, finance and international institutions attend the high-level conference on the Mediterranean Solar Plan in sunny Valencia. Adressing the audience, Bellona President Frederic Hauge stressed the need to deal with food and water security when creating a new energy infrastructure. 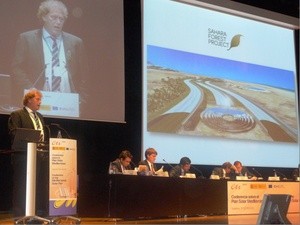 The Mediterranean Solar Plan (MSP) is a joint effort between the European Union (EU) and North African and Middle Eastern countries (MENA) and is currently gaining considerable momentum. The EU presidency of Spain gathered key stakeholders in Valencia earlier this week to confront the challenges ahead.

Deputy Director-General of the Directorate General for energy of the European Commission, Fabrizio Barbazo, confirmed that the MSP-target for realizing 20 GW of renewable energy by 2020 is a key part of the EU target of 20 percent renewable energy by the same year. Sector Manager Jonathan Walters of the World Bank stated the MSP has the potential to be “a major contribution to climate change mitigation on a global scale.” 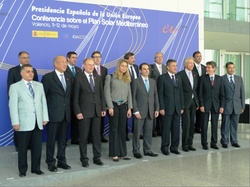 Representatives of the MENA-countries were equally clear that MSP must include technology and knowledge transfer to reach its full potential. Hélène Pelosse, Interim Director-General of the International Renewable Energy Agency (IRENA), stated that “What once was a utopia is now being developed into projects of reality”. Vice-President of the European Investment Bank, Phillipe de Fontaine Vive Curtaz shared her optimistic evaluation and declared: “I am leaving more optimistic than when I arrived”.

The Bellona Foundation was invited to the conference on the Mediterranean Solar Plan to share its visions for a more holistic approach towards planning the next energy revolution. President of the Bellona Foundation, Frederic Hauge, presented the Sahara Forest Project for an engaged audience. The Sahara Forest Project is a unique combination of proven environmental technologies, such as solar thermal power, modern biomass production and The Seawater Greenhouse. The resulting synergies enable restorative growth in some of the world’s most arid regions. More information on the project can be found on the projects home site.

On the panel discussion the President of The Bellona Foundation challenged the emerging CSP industry (Concentrated solar power) to combine forces and find out together with the EU-institutions what is needed of regulatory framework for the industry.

– We cannot afford to do the same mistake as we did in the past. We cannot, once again, create a new energy infrastructure, without taking into consideration food and water security, he also pointed out.

Hauge emphasized the need for biomass as a key component of the future renewable energy mix. Production of biomass also creates local development through the establishment of green jobs. Member of the European Parliament and rapporteur for the EU renewable directive, Claude Turmes, agreed with Bellona in that biomass needs to play a key role of the MENA energy production. 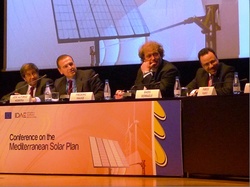 It is only two years since the International Energy Agency (IEA) estimated that solar power could deliver 10 per cent of the energy mix in 2050. It therefore gained considerable attention when Nobuo Tanaka Executive Director of the IEA, announced a “New age of electrification” presenting two new technology roadmaps, for PV and CSP respectively. The IEA now estimate the PV and CSP together could provide between 20 and 25 per cent of the global energy need in 2050.