Renewable sources of energy on the Kola Peninsula

Bellona presents new report “Prospects for Development of Non-conventional and Renewable Sources of Energy on the Kola Peninsula” in Murmansk. 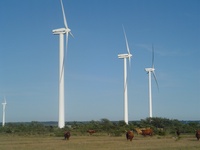 One of the regions in Russia where a transition to clean energy sources is most urgent is the Kola Peninsula where the Kola Nuclear Power Plant poses an environmental threat for both sides of the border. In order to identify prospects for implementing clean energy, Bellona commissioned the Kola Science Centre of the Russian Academy of Sciences to conduct a study of renewable energy sources on the Kola Peninsula in 2006. The report “Prospects for Development of Non-conventional and Renewable Sources of Energy on the Kola Peninsula” by V.A. Minin and G.S. Dmitriev shows the region possesses an enormous potential for renewables. In particular, the region has one of the greatest wind energy resources in Europe, estimated at 360 billion kWh annually. Using all the renewable energy resources available in the region is more than sufficient to meet the current electrical power demands of the region, or match the power capabilities of the most outdated nuclear reactors, thus permitting their retirement.

Annual energy consumption in the Murmansk region is approximately 16 billion kWh (16 TWh). According to the Murmansk Center for Energy Efficiency, nuclear power provides for approximately 37% of the region’s energy requirements, hydro-electric stations 57% and thermal power plants 6%. Other official figures used by the government give the following estimates: 50-60% nuclear, 42 % hydro and 19% thermal. With the exception of large hydro energy, other types of renewables are undeveloped in the region despite their enormous potential. In recent years, the region has had an energy surplus, but an energy deficit will result when the KNPP reactors are decommissioned, unless an alternative is found. Earlier this year proposals for construction of a new KNPP-2 were discussed and subsequently rejected as too expensive. But a second plant is still being contemplated. In addition, the current reorganisation of the nuclear industry in Russia which entails plans for its privatisation, placing nuclear sites and materials in private hands, is certain to increase safety and security risks. Bellona recommends renewable energy sources as the best alternative to nuclear power on the Kola Peninsula, and strongly urges their development for the benefit of the environment and the economy in Northwest Russia.