Prospects of Renewable Energy Sources on the Kola Peninsula

Bellona is publishing an article by Valery Minin and Georgy Dmitriev, scholars of the Kola Science Centre of the Russian Academy of Scientists, analysing the prospects for non-traditional and renewable sources of energy on the Kola Peninsula. “The most promising prospects are utilising the energy of small rivers and wind energy,” consider the scholars. 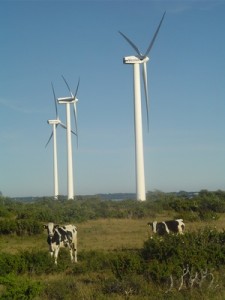 For many years development of energy in the Murmansk region occurred by harnessing hydro-energy resources and by utilising fuel transported to the district-heating and power station and to boilers, as well as nuclear fuel from the Kola Atomic Power Station. Further prospects of energy development are connected with construction of a second Kola Atomic Power Station and with supply of natural gas to the region.

At the same time, the Murmansk region possesses a wide selection of non-traditional and renewable sources of energy (solar, wind, small river, tidal, wave, etc.), which under certain conditions may compete with traditional sources of energy, or advantageously complement the later, and have a perceptible economic impact.

Sources of non-traditional and renewable sources of energy in the Murmansk region, billion kilowatt hours.

The table presents the results of the evaluation of potential and technical resources of renewable sources of energy. It is apparent that solar energy is the greatest energy source, however under northern conditions utilisation is made difficult by the fact that in the winter months when energy requirements reach a maximum, solar energy is at a minimum. In addition, in the northern latitudes there are relatively few days with clear, sunny weather. Therefore, at the present time practical application of solar energy is only feasible for small establishments (lighthouses, floating lighthouses, etc.) where traditional schemes of providing energy are too expensive.

The Kola Peninsula possesses considerable resources of tidal energy. There is significant experience in exploiting Kislogubsky tidal electric station with a capacity of 400 kilowatts. However, considering the comparatively small tidal magnitude along the shores of the peninsula (on average 2-3 meters) and the limited number of water areas which can be cut off by a dam, the construction of a tidal electric station is far from possible everywhere. The Lymbovsky bay on the White Sea deserves attention. According to specialists, it is expedient to first construct an experimental-industrial Kola tidal electric station with a capacity of 40 megawatts in the Dolgaya bay near Teriberka.

The Kola Peninsula has more than 1000 kilometres of coastline. A complete evaluation of ocean waves along the coasts of the Barents and the White Seas showed significant supplies of wave energy. However, transformation of wave energy, its concentration and transmission represent greater difficulty in light of the severe climatic conditions.

Bio-energy resources, composed of wood waste and waste from animal husbandry and poultry farming, are at the bottom of the list of non-traditional and renewable sources of energy. The technical potential of these resources is relatively small in the Murmansk region – less than 1 billion kilowatt / hours per year. Bio-energy resources are dispersed amongst a large number of small farmers. But obviously, their utilisation is interesting when applied to small population points and establishments where they accumulate. Wood-pulp and wood waste have been used by man from time immemorial. Waste from animal husbandry and poultry farming is a “younger” energy resource, but the technology developed in recent decades of processing this energy raw material has even reached trans-polar regions. In particular, these wastes are utilised in the Kovdor area of the Murmansk region, where biogas – a valuable and convenient fuel for practical application – is made with the aid of a bio-energy installation. Dissemination of this experience can only be welcomed.

Of all the sources of non-traditional renewable energy in the Murmansk region enumerated above, the most promising are hydro energy from small rivers and wind energy. The technical hydro-energy resources of the region’s small rivers are estimated to be 4.4 billion kilowatts / hour with a 516 megawatt average annual capacity. Thirty-five small and medium-size rivers are included in this evaluation.

The problem of utilising the hydro-energy of small rivers is not new. In the post-war years in the Murmansk region several village small hydro-electric stations were constructed with a capacity of 10-100 kilowatts. In the 60’s they were supplanted by diesel installations which were cheaper at that time. At the present time, the interest in utilising the energy of small rivers has grown substantially due to the significant increase in the price of fossil fuels.

The Murmansk region wields a large potential of wind energy, concentrated primarily in the coastal regions. The technical wind energy resources are estimated at 360 billion kilowatts / hour using a windmill with an installed aggregate capacity of 120 million kilowatts. The strongest and most sustainable winds are observed on the northern shores of the Kola Peninsula. This is the windiest place on the entire European portion of Northern Russia. Utilising even only 1-2% of the stated resources here, the most accessible and advantageous, (and this is 3-7 billion kilowatts / hour output and approximately 1-2 million kilowatts capacity) can have a huge significance.

The favourable prerequisites for utilising wind energy on the Kola Peninsula are:
• The high wind potential on a sizable territory;
• The presence of prevailing winds (southern and south-western), allowing a compact and less expensive localising of windmills on the terrain;
• The coincidence of the winter maximum in wind intensity with the maximum requirements for electricity and heating on the part of consumers;
• The mutually fulfilling character of the seasonal appearance of wind energy and hydro-electric energy from rivers;
• The presence in the Kola energy system of 17 hydro-electric stations with an aggregate power of more than 1.5 million kilowatts, with water reservoirs with daily, seasonal and yearly regulation allowing compensation for the irregularity in receipt of energy from the wind installation.

Wind energy installations, working jointly with appointed traditional sources of energy are capable of supplanting up to 30-50%, and in the windiest areas up to 70%, of the deficit of fossil fuel.

System wind power (wind installation as part of the energy system) is first and foremost expedient to develop where there is a high wind potential, roads for supplying large windmills and an entrance to the power system. It is also preferable that the region lies near existing or evolving hydro-electric stations. The area encompassing Serebryansky and Teriberka Hydro Electric Power Stations meets these requirements.

Abroad, a wind power system already exists as an independent revenue-producing branch, making a substantial contribution in certain regions of the world (Germany, Denmark, Spain, among others) in the production of electric power. In Russia, the development of a wind power system is in the first stage. At the same time, the country possesses the necessary scientific and industrial potential; the first experimental windmills executed on a modern scientific-technical basis are erected. Wind power stations are operating in Vorkuta, Kalmykia, the Kaliningrad region and other areas.

On the Kola Peninsula, an experimental pilot wind installation with an output of 250 kilowatts is erected near Murmansk in cooperation with Norway. The energy produced is used for supplying energy to the hotel “Ogny Murmanska”. The next step in developing wind power in the region could be construction of a wind park with a capacity of 6-20 thousand kilowatts in the area of Teriberka on the Barents Sea coast. The efforts undertaken are the first steps toward the development of a wind power system on the Kola Peninsula.

Windmills can resolve the problem of heat supply for small villages and settlements experiencing difficulty in heating supply due to constant price increases on boiler oil which is often transported from 1000-2000 kilometres away.

The heating season on the Kola Peninsula lasts 9 months. During the wintertime the wind speed is noticeably higher than in the summertime and therefore the seasonal maximum demand for heating energy on the part of consumers coincides with the possible receipt of energy from windmills. Moreover, the utilisation of wind energy does not make high demands on the quality of energy, produced by the wind installation. This allows simplifying construction of the wind installations, making them simultaneously cheaper and more reliable.

The potential of non-traditional and renewable sources of energy on the Kola Peninsula are huge. Involving these in economic revenue presents a greater scientific-technical task. Resolution of this can alleviate energy supply for many types of consumers and substantially raise the energy independence of the region.