Fish, shellfish and algae live in the sea and do not have to depend on scarce resources such as land area and freshwater. The climate impacts are also low when compared to land based food production. However, there is room for improvement and today’s technology must focus on durable solutions.

Published on October 3, 2017 by Bellona Europa 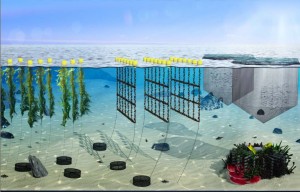 This is the first of upcoming snippets about Bellona Foundation’s work on aquaculture and marine biomass.

Fish, shellfish and algae live in the sea and do not have to depend on scarce resources such as land area and freshwater. The climate impacts are also low when compared to land based food production. However, there is room for improvement, especially in salmon farming; transfer of salmon lice from from farmed to wild salmonids, farmed escapees interbreeding with wild congeners and poor resource utilization with nutrient emissions from the fish farms. The climate impact of the industry also has room for improvement.

Therefore, today’s technology must focus on durable solutions. Many players in the aquaculture industry put huge efforts into reducing the environmental impact: electrification of boats and feed rafts, new methods to prevent loopholes and emissions, and new measures for improving and tackling challenges from fish farming. One interesting project and solution is ocean cultivation.

Ocean Forest – making the ocean into a garden

Ocean Forest is a company and collaboration between Norwegian seafood producer Lerøy and the Bellona Foundation. Seaweed cultivation can contribute to sustaining the world with healthy food, feed and clean energy. Ocean Forest represents one ambitious idea for a sustainable and profitable reality. 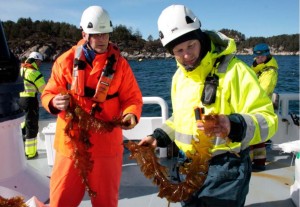 Sugar kelp is among the species that are emerging as new delicacies on the menu. It is is a plant and can be served raw in a tasty salad. Ocean Forest manager Harald Sveier tells about great interest from restaurants in Bergen, Norway, but Lerøy and Bellona aim far higher than the local gourmet market – because sugar kelp is full of useful ingredients. Ocean Forest is about utilizing what we have in excess, to produce what we have in short supply. The world needs more food, feed and biomass as feedstock for renewable energy for a growing world population. We also have limited land and fresh water to produce biomass. In Norway for example, only 3% of the land area is suitable for cultivation. In other parts of the world, agriculture is putting pressure on scarce land areas. The sea, on the other hand, covers 70% the earth’s surface.

“The potential of cultivating the sea is enormous”, states Anders Karlsson-Drangsholt, Bellona’s expert on aquaculture. In order to be sustainable, we must cultivate and harvest species further down the food chain than the traditional salmon. Species that do not require feed or fertilizer to grow. “In Norway, sugar kelp is ideal” explains Karlsson-Drangsholt. Sugar kelp is native to the entire Norwegian coast and it grows rapidly. It is also packed with proteins, carbohydrates, minerals, antioxidants and antibacterial substances, which can be extracted and used in everything from food and feed, medicines and supplements, to biofuels and fertilizers.

Other algae-based products can for example be a new, plant based “super feed” for fish and cows. In addition, algae contain the necessary components for making degradable plastics, reducing production of fossil, non-degradable plastics.

The first harvest of sugar kelp in 2016 was about 17 tonnes. By 2017, the crop had increased to 40 tonnes. Next year, the plan is to harvest 100 tonnes, if the necessary licenses are in place by then. “If this is to become a new industry, we must reach a production of at least 1000 tonnes annually”, says Sveier. “And we still have a long way to go”. Sugar kelp on the other hand requires small areas, it manages itself, and flourishes naturally in the ocean – without impact on the environment and climate. On the contrary, sugar kelp binds CO2, thus contributing to reduce the amount of CO2 in the atmosphere and counteracts ocean acidification. “The challenge is control of the whole value chain, from growth to cultivation, packaging, distribution and production”, says Sveier. 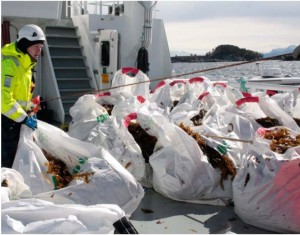 40 tonnes of sugar kelp were harvested during one spring week in 2017.

“It is important that Lerøy has chosen to invest in this project, which will not necessarily bring any revenues in the beginning”, says Karlsson-Drangsholt. “Bellona is an organisation with many thoughts and ideas, inspiring and at the same time challenging us. Our role together is to implement. Together we are like dynamite”, concludes Sveier.

Earlier this year, Bellona published a report on the opportunities and risks of seaweed biofuels in aviation.

Aviation is a challenging transport sector where electrification is not yet possible for long-haul flights. In order to cut down on fossil fuels, there is need for a sustainable, advanced biofuel. In Europe, 90% of biofuels are produced on land, which leads to pressure on scarce land areas, indirect land use change (ILUC) and total emissions equalling to those of fossil fuels. Bellona therefore explores the possibilities for fuel made of seaweed. The benefits of algae fuel are many:

The main challenges, however, are not technical, but economic and political. Currently, the cost for seaweed cultivation is high and demand for algae products is small. It will be up to authorities to provide incentives and industry to upscale and automate, together reducing cost and increasing profitability so that algae-based fuel can be commercially viable.