BRUSSELS – Bellona publishes today its new report on the potential and challenges of using seaweed biofuels in aviation. The report provides comprehensive recommendations for researchers, public authorities and consumers. By mapping existing knowledge and practice, sustainability and development of the technology, Bellona comes to the conclusion that the use of seaweed biofuel can unlock great potentials, while addressing many of the challenges associated with conventional biofuels.

Published on March 7, 2017 by Bellona Europa 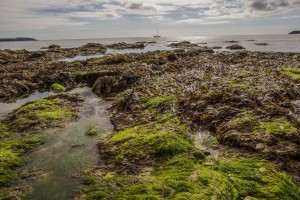 Bellona publishes today its new report on the potential and challenges of using seaweed biofuels in aviation. The report provides comprehensive recommendations for researchers, public authorities and consumers. By mapping existing knowledge and practice, sustainability and development of the technology, Bellona comes to the conclusion that the use of seaweed biofuel can unlock great potentials, while addressing many of the challenges associated with conventional biofuels.

In its native Norway Bellona has extensive experience with related issues, such as Arctic and marine transport, and is a co-founder of large-scale projects involving biomass production such as the project Ocean Forest and Sahara Forest Projects. 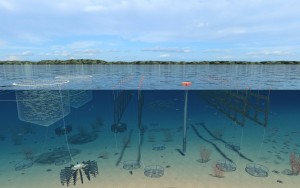 When it comes to cutting emissions from transport, shipping and aviation are often referred to as the elephant in the room: having been excluded from the Paris agreement and being inadequately addressed under existing UN conventions and EU legislation.  Yet these are the two sectors with the most rapidly increasing greenhouse gas emissions.  Aviation in particular accounts for the largest increase in CO2 emissions from transport, 2% of CO2 emissions on a global scale, and the share is growing. Emissions from global aviation have more than doubled over last 20 years, and the sector is expected to grow by at least 5% every year towards 2030, coupled with an increasing demand for fuel.

The Norwegian airport operator and air navigation service provider (Avinor) has set an ambitious goal to halve emissions in 2020 based on 2012 levels in Norway. This is a goal which can hardly be reached without the implementation of biofuels for aviation.  In light of this, in its new report Bellona looks at the potential as well as challenges of using biofuels for aviation. Traditional crop-based biofuels are linked to several challenges such as food competition, water scarcity, biodiversity loss, social injustice, as well as land mismanagement and land use change. However, the use of third generation marine biofuels, such as seaweed, helps in lowering most of these risks.

Seaweed (or macroalgae) is a large, diverse group of aquatic plants. Some common species, like sugar kelp, could become a promising source of biofuels, if sustainably produced and used. Compared with, for example soya, which is also used for the production of biofuels, growing seaweed is faster, more space-efficient and does not require the use of fresh water or the addition of fertilizer. Furthermore, seaweed does not compete for land area. On the contrary, seaweed can be grown in exactly the area we have the most of: the sea.

Biofuels are considered necessary to decarbonise parts of the economy with no alternatives, notably aviation where electrification is not yet available. Europe today meets 90% of its renewable transport target with land-based biofuels, which in many cases are at least as bad as fossil fuels. Meanwhile, climate science shows that fighting climate change will necessarily involve bioenergy, though the sustainable scale remains one of climate science’s most unsure areas.

While seaweed for biofuels will see benefits as well as similar and different challenges to land-based biofuels, we need to consider all alternatives to fossil fuels that reduce difficult emissions.

In combination with fish farming: When cultivation of seaweed is located in proximity to fish farms, seaweed can use the excess, otherwise wasted, nutrients and thereby ensure recycling and cleaning of the surrounding waters, which may otherwise suffer from over-supply of nutrients. It has been documented that kelp can remove between 30-100% of dissolved nitrogen produced by fish farming (Leonczek, 2013).

Existing knowledge and practice: In Norway, brown kelp species like cuvie (Laminaria hyperborean), Norwegian kelp (Ascophyllum nododsum) and in particular sugar kelp (Saccharina latissima) are already being harvested. Compared to Asia, industrial seaweed cultivation in Europe is in the very early developmental phase and comprises only a few species. There is therefore a golden opportunity to design a high-potential industry effectively from scratch. There are currently 18 different companies that have received a license to operate seaweed plants in Norway in 26 different locations on the west coast from Rogaland to Nordland. 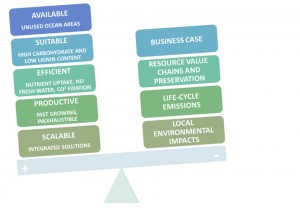 Sustainability of marine biofuels: Wild seaweed populations are an essential component for preserving biodiversity of marine ecosystems and wild harvest should therefore be contained and regulated according to the carrying capacity of the ecosystem. There are local impacts on nutrient competition with phytoplankton, and more research must be carried out for impacts on the local ecosystem, as well as actual life cycle emissions.

Development of marine biorefining industry: There are economic challenges related to the currently high costs of growing, harvesting, preserving/storing and pre-treating the seaweed coupled with inadequate demand. There are also unreliable bioenergy policies with unclear sustainability criteria, unpredictable market size and unmoving industry actors. Optimisation will be needed and an additional cost for upgrading any biofuels to jet-grade fuels taken into account. Tackling these challenges will demand the creation of an advanced biorefining industry, loosely modelled on existing refining industries that take an overarching, holistic approach to seaweed production and use.

There are challenges when it comes to preservation and storage methods, which have a large impact on which end-products will be available. However, the main challenges to a wide deployment of marine biofuels are not technical, but commercial and political. The goal must therefore be to implement incentives, reduce costs and to increase the profitability of seaweed production for energy purposes. 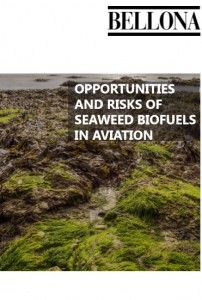 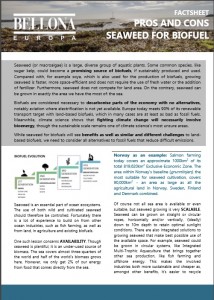