Earlier this month, the Enel Group, whose subsidiary is building a wind park near Murmansk, was singled out for a particular honor by the Russian government. While President Vladimir Putin’s skeptical quips about renewable energy continue to make colorful headlines, he nonetheless awarded the Order of Friendship to Enel CEO Francesco Starace for introducing environmentally friendly technologies and strengthening economic relations.

Published on December 6, 2019 by Anna Kireeva, translated by Charles Digges 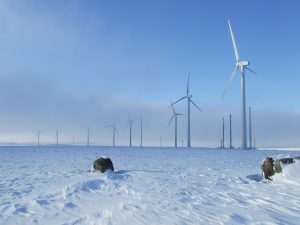 Earlier this month, the Enel Group, whose subsidiary is building a wind park near Murmansk, was singled out for a particular honor by the Russian government. While President Vladimir Putin’s skeptical quips about renewable energy continue to make colorful headlines, he nonetheless awarded the Order of Friendship to Enel CEO Francesco Starace for introducing environmentally friendly technologies and strengthening economic relations.

The Kolskaya wind farm is a project headed by Enel Russia, which has been working to shed its fossil fuel holdings in favor of renewable projects and across-the-board decarbonization. The company is also building wind energy farms in Russia’s southern Rostov and Stavropol regions.

While Moscow has only grudgingly embraced emissions cuts laid out by the 2015 Paris Climate accord, the Kolskaya wind power plant represents a long struggle by Murmansk’s regional government to showcase a green energy project in the Russian Arctic.

Bellona has been touting the vast wind potential of the area since 2005. Since then, four different regional governors have tried to draw foreign energy partners and ink a deal that would stick.

But the headwinds from Moscow, with its heavy reliance on fossil fuel production, have been stiff. As recently as last month, Putin publicly derided renewables, telling an investment conference that zero-carbon energy would “send us back to caves.”

Murmansk officials nonetheless persisted, and in 2017, Enel Russia was awarded a $300 million Russian state contract for the construction of the Kolskaya wind plant.

The plant, whose installed capacity will be 201 Megawatts, will be commissioned in December of 2021. Its 57 wind turbines are to be arrayed in Teriberka, a wind raked village on the Barents Sea coast. When the plant is complete, it could help avoid the release of some 600,000 tons of carbon dioxide, the main greenhouse gas, into the atmosphere.

The machinery will come from Siemens Gamesa, a German-Spanish wind turbine maker that will mainly produce the plant’s equipment in Russia. This is part of a Russian government requirement. Under the terms of Enel Russia’s bid, 65 percent of the wind farm’s hardware must be produced locally. The government contract for the Kolaskay wind plant runs for 15 years and promises a 12 percent return on investment.

In a recent interview, Felice Montanari, head of renewable energy at Enel Russia, told Bellona that construction of the new plant is underway. Preparatory work to accommodate the wind farm’s foundations has started, and local roads are being fortified to handle deliveries of heavy equipment. The first of the turbines are due on the site in early 2021, Montanari said.

The far northern latitude presents special challenges. The frigid climate is harsh and the sparse population means that distances between cities are long and cold. In the dark months of January and February temperatures in the Murmansk region can plunge to 40 degrees Celsius and snow can pile as high as 25 centimeters.

This can mean trouble for the Kolskaya wind plant’ turbines, especially when the ice builds up. The hydraulic and lubrication systems have to withstand the freeze, and the turbines’ rotation sometimes has to be altered when they are coated in ice.

But Montanari was confident in Enel Russia’s planning and engineering.

“I can assure you that we have not encountered any of the obstacles that we would not have considered in advance,” he told Bellona. “We know that it will not be easy, but we are ready for difficulties.”

Indeed, Enel is gaining a foothold in other cold climates. The company is building a wind farm of similar capacity in Canada – where winter temperatures can plunge even lower.

“Our colleagues in Canada are gaining experience and sharing with us best practices and technologies that allow us to take into account any climatic nuances at the design stage,” Montanari said.

Back in Russia, said Montanri, Enel Russia is working not only to get the wind farm up and running, but to become a part of the local community as well.

We strive to ensure that the project is balanced and sustainable, not only from the point of view of the economy, but also of culture, environmental and social spheres,” he told Bellona. “Murmansk residents, with curiosity and perhaps some concern, expect the delivery of the first turbines, these huge metal structures. For our part, we use every opportunity to talk about the project and the new reality where there is electricity based on renewable energy sources.’