The chill winds lashing the Arctic coasts near Murmansk will soon provide a new sort of warming effect – a wind energy farm that will be Russia’s largest, supplying as much as 750 gigawatts of electricity a year.

Published on October 14, 2019 by Charles Digges

The chill winds lashing the Arctic coasts near Murmansk will soon provide a new sort of warming effect – a wind energy farm that will be Russia’s largest, supplying as much as 750 gigawatts of electricity a year.

The Russian-Italian joint project – which will place 57 wind turbines on the coast of the Barents Sea about 80 kilometers from Murmansk – could avoid the release of some 600,000 tons of carbon dioxide, the main greenhouse gas, into the atmosphere.

The Kolskaya wind farm, which will open in 2020, is the work of Italy’s Enel and its subsidiary Enel Green Power.

“With the start of construction of this facility, we are confirming our commitment to Russia’s energy transition towards a low-carbon economy,” Enel Group’s Head of Europe and Euro-Mediterranean Affair said at the wind farm’s ground-breaking ceremony late last month.

While Moscow has only grudgingly embraced emissions cuts laid out by the 2015 Paris Climate accord, the new windmill facility represents a long struggle by Murmansk’s regional government to showcase a green energy project.

“What the greens have been talking about for such a long time has finally happened,” said Andrei Zolotkov, who heads Bellona’s offices in Murmansk. “The Murmansk region, with its wind potential, has been walking toward this milestone for a long time.”

Indeed, it was Bellona that first researched the vast promise of wind energy on the region’s windswept coast in 2005. Since then, four different regional governors have tried to draw foreign partners and ink a wind energy deal that would stick. 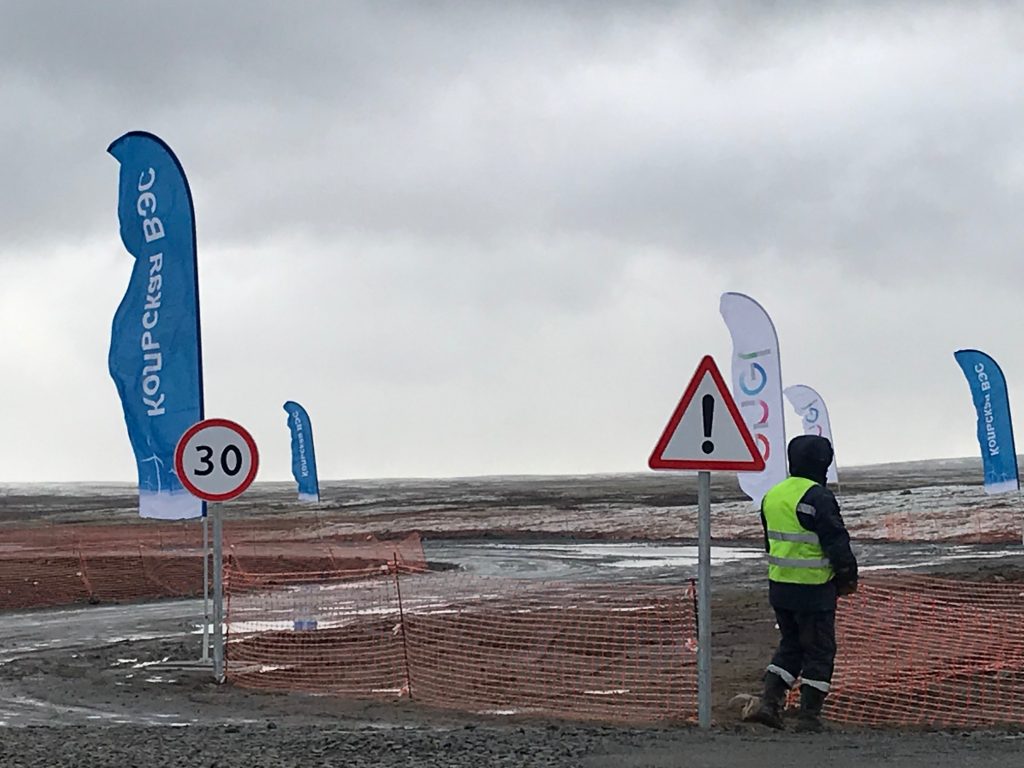 High winds for the groundbreaking at the Kolskaya wind farm. Credit: Andrei Zolotkov

But the headwinds from Moscow, with its heavy reliance on fossil fuel production, have been stiff. As recently as July, President Vladimir Putin – a long-time skeptic of renewable energy – singled out wind power as detrimental to birds and worms.

Still the government has outlined a modest strategy would see some 4.5 percent of the country’s energy produced by renewable sources by 2020.

Murmansk authorities have persisted with that plan in mind. For years they worked with the Dutch company Windlife and its Russian subsidiary Windlife Arctic Power to break ground on a wind farm along the region’s Barents Sea coast.

Those plans never materialized. But Enel stepped into the void in 2017, winning a $300 million Russian government contract for wind energy development.

The Enel farm will occupy the same spot that Windlife scoped out for its own project. A number of Windlife officials will play an advisory role in the Enel project.

Much of the resistance to building a wind farm in Russia’s Northwest is due to a simple fact – the Murmansk region, despite its chilly disposition, has more energy than it knows what to do with.

The Kola Nuclear Power Plant and the region’s 17 hydroelectric plants produce some 3633 megawatts of electricity – some 21 percent of which it exports to neighboring Karelia as well as to markets in the Nordic region. As a result, there are currently no local customers for the energy the Kolskaya wind farm will produce.

But Murmansk authorities, in cooperation with Bellona, have insisted that the area’s high winds must be harnessed.

“Our objective is to turn Murmansk into a truly leading region and the use of the newest technology, like green energy, is a step in that direction,” said Murmansk Governor Andrey Chibis at the groundbreaking ceremony.

According to data gleaned from Windlife’s early studies, average wind speeds on the Murmansk region’s arctic coast reach 8.5 meters per second – among the best rates anywhere in Europe.

Currently, Russia is well behind the renewable targets outlined in the energy strategy. Between 2025 and 2035, Russia only intends to spend about $6 billion on renewable energy projects, accounting for a mere 5 gigawatts of power production.

Still, says Zolotkov, the Kolskaya wind farm could have a significant impact on local industries – especially those with a record of pollution. One of these is the Kola Mining and Metallurgy Company, a daughter branch of the giant Norilsk Nickel, which is currently attempting a major environmental revamp.

By using wind energy, said Zolotkov, the company could go a long way toward burnishing its newfound green credentials.