MURMANSK – Bellona’s Murmansk office is one of the winners of the regional state of the All-Russian Competition of projects completed in the area of energy efficiency and energy savings, or the ENES – 2014. For the first time, the competition was held by the Murmansk Regional Ministry for Energy and Utilities.

Published on September 30, 2014 by Alexey Pavlov 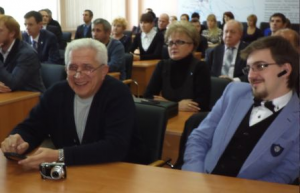 MURMANSK – Bellona’s Murmansk office is one of the winners of the regional state of the All-Russian Competition of projects completed in the area of energy efficiency and energy savings, or the ENES – 2014. For the first time, the Murmansk Regional Ministry for Energy and Utilities held the competition.

Bellona Murmansk was awarded a winner’s certificate in the nomination category “The best project to promote energy-saving lifestyles and energy-efficient organization of production.”

As such, the jury assessed Bellona Murmansk brochure “Renewable Energy on the Kola Peninsula,” which the organization published this year. It was the first effort at collecting comprehensive information on all energy production working on renewable sources in Russia’s Northwest. At this point, the report is available only in Russian. “I’m sure it’s no accident that our brochure (in Russian) fell into the [promotional] category,” said Yury Sergeyev, Bellona Murmansk’s coordinator for renewable energy projects. “If people are familiar with the pamphlet, which illustrates the real situation of renewable energy in the region, it is to a degree promotional, and a plug for new projects.”

Sergeyev continued: “And for us, of course, its nice to get the recognition of regional authorities for our efforts in this long, difficult effort.”

Many good and varied projects

The competition included 16 energy efficiency projects that were implemented between 2013 and 2014. Monchegorsk, one of the polluted hometowns of the Kola Mining and Metallurgy Combine (KMMC’s) plants, upgraded its sewage treatment facilities the towns of Olenogorsk and the KMMC industrial town of Nikel replaced obsolete and inefficient streetlights. Modernized heating pipelines were installed between the Apatity thermoelectric plant and Kirovsk; hospitals and schools actively insulated their buildings and businesses modernized production.

The competition included 16 energy efficiency projects implemented in 2013-2014. Monchegorsk, for example, upgraded sewage treatment plants, and Olenogorsk Nickel – replacing obsolete street lighting, from Apatity CHP to Kirovsk built modern thermal conductivity; hospitals, schools, kindergartens actively insulated their houses and businesses modernize production. Almost all of these projects have been announced for the contest. Almost all of these projects announced their participation in the contest. “Our chief aim is to reduce the cost of energy consumption in order to ensure our buildings are energy efficient because resources are expensive and not getting cheaper,” said Sergey Gubich, the Murmansk Region’s deputy governor overseeing the energy sector. “Having seen that colleges, the Lapland children’s center, large industrial plants like those of the KMMC, and city and regional administration took part in the contest, we understand that many are seriously concerned about this.”

Lighting the way to the 21st Century

One of the most significant projects for the region was the implementation of alternative energy sources in the villages of the Terek district of the Murmansk Region. The populations of these small towns still live without an uninterrupted supply of electricity, which is only on for a few hours a day and produced by diesel generators, to which, during the summer, extremely expensive reserve fuel was delivered. It was only recently that the villages of Pyalitse, Chapoma, and Chavanga undertook to install wind generators and solar panel, which was nominated by the ENES-2014 as best “effective model of attracting extra-budgetary funds and major repair capital.”

Gennady Popov, head of the Varzuga municipal administration, told Bellona that, “In 2013, we received a 31.2 million ruble ($700,000) grant, built a wind farm in [the village of] Pyalitsa, and developed projects for three other villages.”

Popov said, “It’s hard to believe that Pyalitsa went without electricity for 30 years, and now it has a constant supply.”

This year, said Popov, the Varzuga administration won another 98 million-ruble grant, which will be put toward the construction of wind farms in Chapoma, Chavanga and Tetrino.