After years in the doldrums, wind energy projects in Murmansk see their sails filling

MURMANSK – After a decade of drawing up blueprints for a 200-megawatt wind park in the Murmansk Region village of Teriberka, the Dutch company and operator of the renewable energy facility has finally announced its construction will begin in 2015. 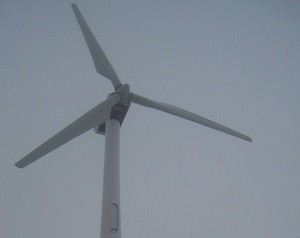 MURMANSK – After a decade of drawing up blueprints for a 200-megawatt wind park in the Murmansk Region village of Teriberka, the Dutch company and operator of the renewable energy facility has finally announced its construction will begin in 2015.

The Netherlands’ Windlife Renewables, formerly Windlife Energy BV, said in a release that, in conjunction with Germany’s WSB Neue Energien GmbH, that the wind park’s construction will begin next year.

The cost of the project is anticipated to be €280 million.

“Both Windlife as well as WSB are confident of the desire of all people involved to work side by side in enhancing mutual economic opportunity and to fight the common threat: climate change,” the companies said. “This wind park will contribute to maintain[ing] the delicate climate balance in the Arctic.”

According to Windlife Renewables’ general director, Paul Logchies, the wind park construction and installation of wind turbines is slated for the beginning of 2015, and will be completed and operational by 2016.

The joint venture will build a wind park comprised of 80 turbines of 2.5 megawatts each, which will produce some 650 gigawatt hours of renewable energy each year. The joint company is currently searching for a subcontractor to build the turbines in accordance with Russian demands.

Should the project be successfully completed, it will constitute Russia’s largest wind park.

The wind that almost didn’t blow

By the end of 2008, three separate companies began construction of three wind parks: The Dutch Windlife Energy planned to build its 200 megawatt park in near the Murmansk Region villages of Teriberka and Tumany; The St. Petersburg based company Russian Energy stake a claim to build a 100 megawatt station in the Pechenga district of the region. The Interdepartmental Commission approved these two projects in 2008, but not the third – the Dutch Project Invest BV effort – which the commission said presented an undeveloped financial plan.

Project Invest BV aimed to build another 100-megawatt wind park in the Teriberka district, which could later be expanded over a seven-year period into a 400-megawatt facility.

The year 2009, even saw discussions of creating wind power installations for the Russian Naval Shipyard Nerpa.

A shift in regional governors, however, scuttled local programs supporting renewable energy. Governor Yevdokimov failed to sign off on them before he was replaced by Governor Dmitry Dmitrenko, who showed no interest in the programs. The renewable energy task force was thus dissolved.

“If you have standing idea, you bring it to fruition, though good times and bad,” Logchies told Bellona in an interview Monday. “Windlife has suffered all its bad times. We have come through the world economic crisis, waited five years for the Russian government to keep its promise to develop a federal scheme of support for renewable energy projects, and we still want to develop clean energy on the Kola Peninsula.:

Logchies noted that since the Russian government in May 2013 adopted the federal law “On Electrical Energy,” building the wind park will be profitable. The federal law contains mechanisms aimed at stimulating renewable energy for the general energy market, which establish rules for pricing energy produced by renewable sources and guarantees on capital return on investments made in them, as well as necessary level for their yield.

Logchies said that one of the demands of the law is the localization of equipment production for the wind park, 55 percent of which will be local manufactures, which rises to65 percent for projects started after 2016.

“This mean that parts of the wind turbines – the towers and fan blades for instance – must be made in Russia,” Logchies told Bellona. “Windlife considers they can even be produced in the Murmansk Region (and) we are now holding discussions with various European producers about opening manufacturing in Russia.”

Yuri Sergeyev, Bellona Murmansk’s program coordinator for renewable energy, said the Windlife project  is a vivid example of the difficulties of stabling a renewable energy sector in Russia.

“Logchies’ stubbornness and optimism can only be envied,” Sergeyev said. “Bellona warmly greets the news of the rebirth of this process, although there remain apprehensions about the complexity localizing equipment manufacturing – this could become a serious barrier on the road to implementing the project.”

Sergeyev added, however, that “we are hopeful that the Kola Peninsula will become home to the first, and one wishes to believe, not last wind park.”

“We have long had the dream of building the first large-scale wind park inside the Arctic Circle,” Logchies said. “And we will realize that, not without a little pride.”