MEASAIEED INDUSTRIAL CITY, Qatar – Today the first cucumbers from the much anticipated Sahara Forest Project Pilot Facility were served to VIP guests and workers at the site of the facility within the Measaieed Industrial City in Qatar. After 10 months of intense construction, the guests could today also tour the project that promises to turn the desert green, producing their arable land and fresh water, in a program developed by Yara, Qafco and The Sahara Forest Project. 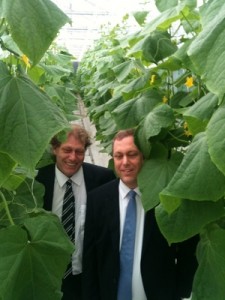 Its official opening is set for December 11. Today’s tour of the plant was meant to infuse the current COP18 climate talks in taking place an hour’s drive from the plant, with some inspiration as they work  to hammer out some agreement on a future emissions slashing deal that will apply to the whole world with the hopes of mitigating the effects of climate change, freakish weather, droughts and food shortages.

The Sahara Forest Project is an example of turning those efforts into a practical reality.

“We are proud to serve our first cucumbers here today,” said Joakim Hauge, CEO of The Sahara Forest Project AS. 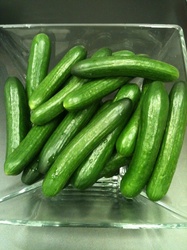 “It was a dream for Bellona that is now becoming a reality. I am very proud if what we have achieved and to be a part of this long-term commitment for Bellona,” said Bellona President Hauge.

Bellona President Hauge participated in giving the first guided tour of the plant. 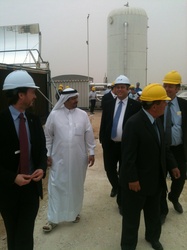 Aside from cucumbers, guests at the pilot plant today were also shown the 10,000 square meter facility where they learned about its unique saltwater-cooled greenhouses, Qatar’s first operational Concentrated Solar Plant, the region’s largest algae research facility, as well as technologies for turning the desert green.

The Sahara Forest Project will continue to receive visitors to the pilot facility throughout the COP 18.

”We are going to make the desert green,” declared Bellona President Hauge. ”We are going to use what we have enough of  – desert, sunlight, seawater and CO2 – to produce what the world needs more of – Food, energy and fresh water.” 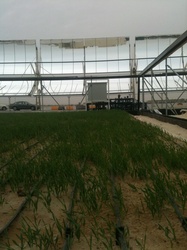 Sahara Forest Project CEO Hauge added that it “sets out to inspire the delegates as a positive and innovative solution to fight climate change.”

The science behind the inspiration

The Sahara Forest Project combines already existing and proven environmental technologies, including saltwater-cooled greenhouses, concentrated solar power (CSP) and technologies for desert re-vegetation around a saltwater infrastructure. The synergies arising from integrating the technologies improves the performance and economics of the system compared to those of the individual components.

As explained by Bellona President Hauge, through re-vegetation of the desert, the project is actually able to bind CO2 and go carbon negative while at the same time producing food and clean energy.

“The partnership with Yara and Qafco is very constructive and we look forward to conducting further scientific work on the pilot together,” says Joakim Hauge.

Bellona part ownership not to obscure its commitment to industrial oversight

The Bellona Foundation in Oslo also has part ownership in the Sahara Forest Project, which Bellona President Frederic Hauge said last week is a long-term investment that represents a “game changer.”

‘Together [with Yara and Qafco] we will investigate and develop tomorrow’s solutions,” said Bellona President Hauge last week. “And together we will immediately begin our work to outperform the fossil industry –  and what we will produce will be cheaper and better.”

Bellona President Hauge vowed that the enviornmental organizatons forray into the commercial world would not compromise its ability to be “a transparent, critical and constructive player in the environmental debate – in other words, what you have always expected from us before.”

“We will continue to speak out about what we think is right and what is wrong,” he said, adding that Bellona began its environmental program for business and industry over 15 years ago.

“We are very proud of how the cooperation program with the private sector has been an incubator for the realization of the plant in doha. This would not have been possible without Bellona’s bilateral cooperation with Yara and Qafco,” he said before departing Oslo for Thursday’s introductory tour of the plant. 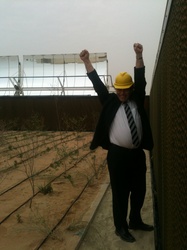 Bellona’s Hauge proud of growth from idea to reality

In addressing the VIP guests to the pilot plant in Measaieed, Hauge said that Bellona has first pointed out the problems of desertification, greenhouse gas impacts and ultimate damage to the food and water caused by impending climate change, which are by now upon us.

“Then we started pointing at solutions,” said Hauge. “That is more difficult – but we are not doing this in the desert because it is easy. We are doing it because it is necessary. For Bellona, it is important to acknowledge this.”

He added that, “What we need is a green revolution, and this is one step closer.”

“Today is the day to see it happen – to experience it, to see it, to feel it and to taste it.”

Video about the Sahara Forest Project