Bellona President Frederic Hauge has been invited to the Clinton Global Initiative starting in New York today. The Sahara Forest Project, where Bellona is one of the main partners, will be presented as a ”CGI Commitment to Action.” 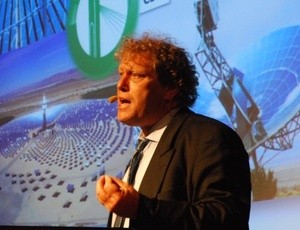 The Clinton Global Initiative (CGI) is held in New York from September 20-23, and gathers high profiles from politics, business and civil society.

It’s the third time the Bellona Foundation has been invited to attend CGI, and this time Bellona has also been given the possibility to put in a big plug for the Sahara Forest Project, an innovative project that will be presented during a breakout session at CGI on Wednesday.

See this year’s program for CGI. You can watch video from CGI here.

A Commitment to Action

It will be the first time a Norwegian organization has ever presented a CGI Commitment to Action. Commitments to Action are specific, and measurable initiatives undertaken by CGI members. Varying in size and duration, commitments may focus on diverse concerns, regions, and types of activities.

Last September, members of the Clinton Global Initiative have made nearly 1,700 commitments valued at $57 billion dollars.

A few of them are selected to be presented at the annual meeting in New York.

“In Bellona we are technology optimists, and we truly believe that the Sahara Forest Project can offer solutions within a range of areas,” Søyland says.

Sahara Forest Project (SFP) is a combination of environmental technologies to enable restorative growth defined as reforestation and creation of green jobs through profitable production of food, freshwater, biofuels and electricity. While society still strives to realize that sustainable solutions must replace the traditional extractive use of resources, the Sahara Forest Project demonstrates the potential for restorative practices.

The Sahara Forest Project is designed to utilize what we have enough of to produce what we need more of, using deserts, saltwater and CO2 to produce food, water and energy. The project combines solar thermal technologies with technologies for saltwater evaportation, condensation of freshwater and modern production of food and biomass.

The Clinton Global Initiative was established in 2005 by President Bill Clinton, and convenes global leaders to devise and implement innovative solutions to some of the world’s most pressing challenges. Since 2005, CGI Annual Meetings have brought together more than 125 current and former heads of state, 15 Nobel Peace Prize laureates, hundreds of leading CEOs, heads of foundations, major philanthropists, directors of the most effective nongovernmental organizations, and prominent members of the media.