In surprising remarks baring a truth that has long been obvious to others, the former Russian nuclear minister Evgeny Adamov has acknowledged that as the world is getting ready to embrace the full potential of wind energy, the “peaceful atom” has all but exhausted its possibilities

Published on July 6, 2010 by Andrey Ozharovsky, translated by Maria Kaminskaya 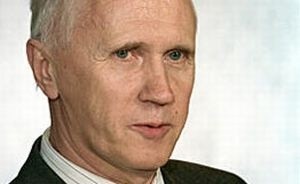 Speaking at a June 17 session of the Russian Academy of Sciences’ Conference on Multiphase Systems, the former chief of the Russian nuclear authority apparently renounced, at least partly, the blind faith in the power of nuclear energy that used to be expected from his policies and statements. Adamov’s tenure as the head of the former Ministry of Atomic Energy (Minatom) – now, the state corporation Rosatom – lasted from 1998 to 2001, when he was relieved of his post following a corruption scandal, which included criminal investigations in both Russia and the United States. His morals and his scandal-marred career as a government official aside, what is of interest here is some of Adamov’s latest propositions as a nuclear specialist and industry insider. At the conference, Prof. Adamov, D.Eng. gave a report entitled “What’s ahead for nuclear energy?” Partly, he expressed uncharacteristic doubts about the future of nuclear energy. Partly still, he keeps trying to justify the industry’s existence with new myths intended to perpetuate its appeal.

According to a story published by the Russian Nezavisimaya Gazeta, Adamov said at the conference that nuclear energy in its present form is close to exhausting its possibilities. Many of the old myths that would previously support the argument for the promotion of its further development have been deflated.

Ecologists have long been saying that justifications of the use of nuclear energy are based on myths rather than facts. Volumes of research went into proving this, such as the prominent Russian environmentalist Alexei Yablokov’s Nuclear Mythology, Arjun Makhijani and Scott Saleska’s The Nuclear Power Deception, or a recent American paper entitled “False Promises: Debunking Nuclear Industry Propaganda,” which was published by the Nuclear Information and Resource Service (the Russian edition of this work was translated by the ecological organisation Ecodefense! and published with the support of the Heinrich Böll Foundation), to name a few.

So which old myths did Adamov acknowledge as lies – and which new ones did he try to insinuate?

“The world is running out of fossil fuels.”

One of the older ones is that the world’s reserves of fossil fuels are soon coming to an end.

“You can read in certain reports today that [global] fossil fuel resources are limitless,” says Adamov. True, as long as twenty to thirty years ago mythmakers prophesied that global oil and gas deposits would dry out within two or three decades. Some keep insisting this will still happen in the near future – another twenty to thirty years, maybe, and that’s it.

There is no doubt that the world needs to wean itself off its dependency on hydrocarbons – but there are safer and cheaper alternatives to that than building more nuclear power plants. Adamov seems to be well aware of these options.

Another, more recent myth, according to Adamov, is the principal unsuitability of renewable energy sources to serve as a viable substitute for nuclear energy.

“Renewable energy would not be able to secure an energy production share of more than 10 percent – such was my forecast ten years ago,” Adamov said. “I was wrong. Wind [energy] has soared: Last year, 2009, saw the launch of 38 gigawatts’ worth of wind energy, and only 1.3 gigawatts in nuclear energy at stations across the world. The contribution made by solar energy will be inevitably growing as well.”

It is quite laudable that the former minister is familiar with facts and statistics of the world energy industry. These facts reveal the simple truth that wind energy is moving ahead at a dramatic pace, while nuclear energy seems to be mired in stagnation.

The more interesting question, though, is: What do we do to make these facts known to those currently in power? Given these statistics, one is puzzled to hear Russian Prime Minister Vladimir Putin repeat time and again the old incantations about how forward-looking, how promising nuclear energy is. Does Putin have to leave his post, like Adamov did nine years ago, to realise the simple fact that Russia’s energy sector is lagging seriously behind precisely where it could benefit the most – the use of renewable energy sources? To forgo the vast potential of solar, tidal, and wind energy like this is a stark example of poor management and wasteful policies with regard to natural resources.

“The worst nuclear catastrophes are behind us.”

This subject marked a point of departure in Adamov’s speech, from where the former Minatom chief went on to indulge in some new mythmaking. Adamov said:

“The largest catastrophes in nuclear energy have already taken place. Under no circumstances will there ever be at any nuclear power plant an accident of the scope that we are seeing at the oil well in the Gulf of Mexico.”

This is sheer conjecturing, a completely unsubstantiated statement of the kind the ex-minister used to make when he still steered the Russian nuclear industry. Common logic suggests that there can be no grounds to so flatly deny the risk of severe accidents at nuclear sites. One still remembers Soviet-time propaganda that said Chernobyl-type reactors were so safe one might as well install one in Red Square. Should we expect more proposals like that, now that we’re being treated to another portion of blanket safety assertions from Adamov?

There is another concept, one that deals with a tendency for mass-scale man-made disasters to repeat themselves. One of the more recent ones was in hydroenergy – the terrible accident at Russia’s Sayano-Shushenskaya Hydroelectric Power Plant. The worst oil spill known to date is still in progress in the Gulf of Mexico. What if, God forbid, nuclear energy is next in line? What if, just maybe, the world’s worst nuclear catastrophe is not in the past, but in the future? Shall we, just maybe, start thinking that in order to prevent it we should gradually take out of operation the many dangerous nuclear power plants we have built, rather than building new ones? One doesn’t have to be a nuclear scientist to understand that if we are to have any guarantees that a nuclear power plant will not go up in smithereens, it’s if that plant is shut down and sealed off.

The whole debate of whether or not the worst nuclear catastrophe has already occurred or is still in the future is itself largely a moot point. Nuclear scientists and industry insiders themselves concede the fact that there are no 100-percent safe nuclear power plants, and a catastrophe at a nuclear reactor is not limited to any space or time confines. Furthermore, there is still no solution to the issue of what to do with radioactive waste.

Thus he clearly and unequivocally states the fact that the issue of geological disposal of radioactive waste has not been successfully resolved anywhere in the world. It is exactly because of the unreliability of data pertaining to the stability of rock formations – the final resting place meant to keep dangerous radioactive material safely isolated from the surrounding environment for hundreds of thousands of years – that the United States has given up on its Yucca Mountain project.

Only two countries, Finland and Sweden, have started construction of their geological repository sites, but they are conducting these works, as one might say, to their own risk and peril. There are no guarantees that the granite massifs where the burial sites are being built will remain reliably stable for a hundred thousand years to come.

Russia, too, has its own costly pet project, a risky gamble envisioning the construction of an interment site for nuclear and radioactive waste in a granitoid formation near the Siberian city of Krasnoyarsk.

“The closed nuclear cycle is the future of nuclear energy.”

Another myth that Adamov again broadcast during his speech is the promise of the closed nuclear cycle.

“If, beginning in 2030, we start developing fast-neutron nuclear reactors, then by the end of the century, we will achieve the closed nuclear fuel cycle.”

The nuclear power technology based on fast-neutron reactors, such as it is today, is beset by so many problems that its swift arrival is as much a certainty as was the advent of Communism – in that pure sense in which it was hailed in the Soviet Union in the 1960s. Besides, in order to “close” the nuclear fuel cycle, spent nuclear fuel will have to be reprocessed, rather than sent into storage. It’s all good and well – except the problem is that reprocessing this fuel will yield radioactive waste exceeding current amounts by hundreds of times. And no one knows what to do with this waste, as the idea to continue dumping it in the Russian rivers and lakes – the way it happens now – or injecting it into underground aquifers seems beyond unacceptable, given what huge hazard it is and how unscrupulous such disposal methods are.

In place of an afterword

The situation we are observing is a strange one indeed. While this or that Russian nuclear official is still in power, tending dutifully to this or that PR cycle according to job description, they are devoted to the idea of nuclear energy, the notion that more and more federal budget money needs to be pumped continuously into the industry, that the problem of nuclear and radioactive waste will be sorted out any day now, that there are – or at least soon will be – safe reactors, or other such miracles.

But a guilty verdict handed down by a criminal court and some time spent brooding in prison seem to have been enough even for the former nuclear tsar to start seeing the reality of things. The apparent transformation speaks for itself. What about the rest of our nuclear officials? The reader is trusted to draw their own conclusions.

Professor Yevgeny Adamov, D.Eng., headed the Russian Ministry of Atomic Energy between 1998 and 2001. In May 2005, Adamov was arrested on fraud charges by Swiss law enforcement officers in Berne on a warrant issued by the US Department of Justice. Later, at Moscow’s insistence, Adamov was extradited back to Russia. In February 2008, a Moscow court ruled that the prosecution had met the burden of proof for the charges of fraud and egregious official misconduct. The court found Adamov guilty of embezzling over $30m and sentenced him to five and a half years in a minimum-security penal colony. The damages inflicted by the crimes perpetrated by the ex-minister are estimated at around $1 billion.