MURMANSK – Bellona held its first Russian-Norwegian Videoconference to discuss development of bioenergy projects in Russia’s Northwest last week. As cooperation grows between Russia and its northern neighbours in developing renewable energy, regions seem willing as ever to try to tap into the vast energy potential offered by renewables, their bilateral teleconference on March 16th showed.

Published on March 22, 2010 by Anna Kireeva, translated by Maria Kaminskaya 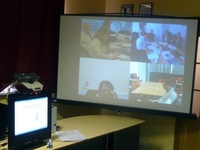 The conference was organised by joint efforts of Bellona’s Oslo staff and specialists from Bellona’s two Russian offices, in St. Petersburg and Murmansk, and was part of the Forum for Renewable Energy in Russia’s Northwest, a twice-yearly event that will next take place in St. Petersburg this April.

“Despite a number of difficulties, first and foremost, of technical nature, the videoconference was a success,” said renewable energy projects coordinator with Bellona-Murmansk Yury Sergeyev.

He said Bellona plans to hold a series of such videoconferences in the future. The first one, which served as an introductory meeting, brought together for the first time the different parties interested in and working for the development of bioenergy in Russia’s Northwest, and became a successful means of liaison for participants to get acquainted and work out an agenda for future activities.

“We hope that this form of discussion and looking for solutions to environmental problems will become as common as the usual practice of seminars, forums, or round tables, because a videoconference has several advantages: It saves participants time and money, and, what is probably the most important thing, by conducting our meetings in this way, we are cutting down CO2 emissions,” Sergeyev added.

Technological support and videoconferencing equipment were supplied by the Latvian company Avicom, and financial backing was provided by the Norwegian Barents Secretariat – a foundation sponsoring a variety of events and projects initiated as part of Russian-Norwegian cooperation in the fields of ecology, education, and culture, among other initiatives.

According to Cato Kjølstad, head of Norsk Bioenergyforening (Norwegian Bioenergy Association, NOBIO), his organisation – a group that promotes bioenergy solutions and unites some 350 organisation members and companies working in the field – is trying to draw the attention of government officials and decision-makers toward the pressing matters of advancing bioenergy technologies and application in Norway.

“We organise various events aimed at developing our relations with colleagues in the European Union,” said Kjølstad.

Among Scandinavian countries, however, Sweden remains the most successful in promoting and making use of various bioenergy technologies. Since 1980, when almost all the energy consumed in Sweden came from fossil fuels, mainly coal, Sweden has made great strides in converting toward an energy economy based on bioenergy. Compared to Norway, where bioenergy only generates 14 terawatt-hours of electricity – about a tenth of total annual electricity production – Sweden produces 120 terawatt-hours’ worth of its energy from sources such as wood, plant material, or farm waste.

Hans Borchsenius, head of the international department at Norsk Energi, a consulting company specialising in providing environmentally friendly energy solutions, said energy production in Norway exceeds consumption by twelve times, however, only six percent of all energy consumed in the country comes from biomass.

“In the near future, we are to increase energy production from renewable sources, whose share as of now stands at 58 percent, which in itself is not so bad,” said Borchsenius. Such a large share of [renewable energy sources in Norway] has primarily become possible thanks to hydroenergy (which is still prevalent in Norway), which historically has for many years been cheap and easily available.”

“Because Norway has signed the European Union resolution [on boosting renewable energy to 20 percent in total energy production by 2020], we will need to increase the share of renewables to 72 percent, which, no doubt, will give a powerful impetus to the development of bioenergy.”

To achieve that, however, certain barriers have to be overcome first, said Borchsenius.

Among those stumbling blocks that for now hinder the development of bioenergy in Norway, Borchsenius named the lack of hot water distribution systems, the high investment costs that remain at odds with the low electricity prices, as well as the insufficiently developed biomass recovery system that could serve for the production of heat in many areas of the country.

Borchsenius also pointed out that quite a number of successful bioenergy projects have become a reality in Norway’s neighbour and fellow oil producer, Russia. In one of these, a 1996 feasibility study done in Murmansk Region – a Far Northern Russian region on the Kola Peninsula – led to the construction and successful launch of a boiler house fuelled with wood chips. The plant was built in 2000 in the village of Verkhnetulomsky.

In 2006, two fuel-oil-based boiler houses in the village of Salmi, in the Republic of Karelia, were switched to biofuel.

Bioenergy, indeed, is a fast-growing field in Russia, said Viktor Dmitriyev, head of the Novgorod branch of the Russian-Swedish Bioenergy Information and Training Centre, Biocentre.

“Novgorod Region has all the right conditions to participate in bioenergy projects: 64 percent of the region’s territory is covered with forests, but we only us some 40 to 42 percent of our resources,” Dmitriyev said.

Novgorod – a Northwestern Russian region centred around the city of Great Novgorod, not far from St. Petersburg and Moscow – depends on fuel transported from elsewhere and has a high demand for local energy sources. Up to 65 percent of energy in the total energy economy of the region is provided by natural gas, and smaller municipalities use coal. In 2009, the regional government made the decision to switch the region’s boiler plants from coal to locally produced energy sources.

According to Dmitriyev, in order to better develop bioenergy in Russia, “a sort of an OPEC or an [energy] cluster” needs to be created. In Novgorod Region, such a structure could work to analyse and assess bioenergy development prospects and serve as a regional biomass market regulator. “We can achieve great successes if we unite our technological innovations with foreign experience,” Dmitriyev said.

Dmitriyev blames the lack of substantive state support for the bumpy progress bioenergy projects are currently making in Russia.

“The money that the regional budget is giving is not enough to make our use of forest resources more efficient or to prepare qualified engineering staff,” he explained.

Among a variety of projects undertaken lately in joint cooperation between Russia and Norway, one showcase example is a regional bioenergy resources development programme worked out in Arkhangelsk Region, a territory in the far north of European Russia. According to Sergei Fashchevsky, a leading specialist in environmental and climate mitigation projects with Norsk Energi, Arkhangelsk Regional Administration approached Norway for legal consulting to help in its development of a regional target programme that envisions switching the area’s boiler plants from coal to biomass.

“It’s one of a number of pilot programmes in Russia. By the end of this year, we plan to start our work together. We are trying to find those municipal sites where such projects will be both commercially attractive and technologically feasible,” Fashchevsky said.

He added that a lot of support was coming for the programme, which will unite efforts from non-governmental organisations, Russian equipment suppliers, and other interested parties.

“This programme should work regardless of any economic or political perturbations,” Fashchevsky said.

If it is indeed a success, the programme could serve as a springboard to launch copycat initiatives in other Russian regions as well, and that, in turn, could give a strong boost to the development of bioenergy overall in the country.

During Bellona’s videoconference, as participants continued to discuss the prospects and difficulties of international cooperation in bioenergy, Fashchevsky admitted that his company receives an impressive number of applications asking for support as Russian municipalities try to put together business plans for various renewable energy projects, yet, for reasons of either economic unsoundness or bureaucratic hindrances, only a handful of projects get a chance at implementation at the end of the day.

According to Yevgenia Fyodorova, renewable energy projects coordinator with Environmental Rights Centre Bellona in St. Petersburg, Bellona’s videoconference was a valuable experience for both Norwegian and Russian participants. She said she hopes such meetings will help establish an even better rapport and broader contacts among those working with renewable energy in Northern Europe.

For all the promising results, Bellona-Murmansk had to contend with a certain disappointment delivered by the no-show of Murmansk administration officials and heads of the region’s agricultural companies, who had previously stated they would attend. Ecological organisations in Murmansk have lately noted on more than one occasion a growing reluctance on the part of the local government to lend an ear to the region’s environmental community and the issues it puts forward.

“By applying for participation in the videoconference – where there was a real opportunity to find partners and agree on joint projects – and by simply not showing up for it, officials and agricultural companies demonstrated that their words were nothing more than a bunch of hot air.”