ST. PETERSBURG – Monday’s accident at Russia’s largest hydroelectric power plant, Sayano-Shushenskaya in Siberia, is bound to send a shockwave of drastic changes through the country’s energy budget, while the resulting ecological disaster on the Yenisei river casts a gloomy shadow over future hydropower projects.

Published on August 19, 2009 by Bellona, translated by Maria Kaminskaya

The accident and its severity cast a pall over adherents of renewable energy, as hydro-electric power is a powerful way to harness energy without emitting an overabundance of greenhouse gasses. The accident of August 17th took the lives of least 14 people and 62, by the latest count, went missing and are presumed to have been killed when the turbine room was flooded following what is now described by officials as a “hydraulic impact” of as yet unknown origin.

The Sayano-Shushenskaya Hydroelectric Power Plant (HPP), located in the Siberian region of Khakassia near Sayanogorsk on the Yenisei River, is owned by the state company RusHydro. According to media reports, RusHydro’s acting CEO Vasily Zubakin estimated the odds of finding any survivors in the flooded turbine room of the plant as very slim. The rescue operation, however, is still under way.

According to Russian news agency Interfax, on Wednesday, August 19th, Russian Emergency Situations Minister Sergei Shoigu told journalists the task of finding the victims and any survivors remains the foremost priority for his rescue teams and that “we are not giving up.”

Rescue divers continue working in the turbine room as water is being pumped out at the same time. The search, however, is being complicated by the extent of the debris created by the accident in the 300-metre room, said Russian national television news programme Vesti. Works are reported to continue for another three to eight days.

By Wednesday, said Interfax, 150 additional first-responders arrived at the scene, deployed from a range of emergency response units based in neighbouring regions.

Interfax points out, however, that the ongoing rescue and salvage mission does not indicate necessarily that any survivors may yet be found in the flooded hall: Specialists explain that the operation implies clearing the wreckage to the very last piece of debris to establish the status of every single person listed as missing. In effect, that means Sayano-Shushenskaya’s death toll is only bound to rise.

Lists of those missing were compiled based on information provided by workers’ families. In the confusion that followed in the immediate aftermath, however, little room was left for information that would be safe to consider irrefutable. As of Monday, 11 or 12 were thought killed by the accident, but lack of official commentary in the first hours after the accident drove a group of volunteers to set out searching independently for information on the victims and survivors. The group declared as many as 18 dead the same day.

Unofficial sources also spread information that between 30 and 40 bodies were delivered to the morgue of Khakassia’s main city Abakan from the scene of the accident.

Shoigu told journalists on Wednesday that panic continues to shake the local population and those responsible for leaking unconfirmed information – including that “an explosion took place and a wave swept over Sayano-Shushenskaya HPP and went further up the river estuary” – must be stopped and held accountable. On Monday, said Shoigu panic-mongering resulted in “gas prices jump(ing) twofold [and] people, overcome by panic, were picking up their kids from recreation camps (and) panic-buying emergency essentials.”

Authorities are forced to spend a lot of time and effort on assuaging public worry and refuting false information about the accident, said Shoigu, according to Interfax.

Cost of the accident
Power generation at Sayano-Shushenskaya halted immediately after what RusHydro later referred to as a “powerful hydroshock,” which occurred at 4:15 am Moscow time. Investigators now believe an oil transformer exploded during repairs and caused the extensive damage to the plant, destroying a portion of the turbine hall and flooding both the hall and facilities underneath it. RusHydro said the flooding had occurred due to a pressure surge in water pipes, according to media reports, though its website says the investigation is still ongoing. 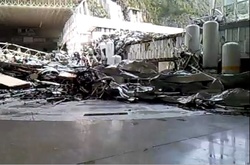 Yet, Gazeta.Ru points out, RusHydro is yet to name the precise brand of the oil used in the transformer. In environmentalists’ estimates, this will be crucial to determine how damaging the chemical pollution really has been or will still prove to be.

Of particular concern to environmentalists and public health authorities is that polychlorinated biphenyl (or PCB) – an extremely poisonous and carcinogenic substance – is known to be used in old transformers as an electric insulator. It remains to be seen whether PCB was spilled into the Yenisei in the alleged transformer explosion at Sayano-Shushenskaya.

Large hydroelectric works as a potential environmental hazard
The Sayano-Shushenskaya disaster is likely to spur ahead another stage of the war waged over the plans for the new Evenkiiskaya (Turukhanskaya) Hydroelectric Power Plant projected by RusHydro to be built on the Nizhnyaya (Lower) Tunguska river in Krasnoyarsk Region.

Discussion of the environmental impact study done on the project started on the same day as the accident, but heated debates over the advisability and risks of construction have raged ever since 2005, when the plans, once abandoned in the 1990s due to Russia’s economic hardships during the transition period from the Soviet state to a free economy, were retrieved and dusted off by RusHydro.

Greenpeace Russia has publicised a statement saying environmentalists hope that the tragedy at Sayano-Shushenskaya will force everyone “to think twice about RusHydro’s grandiose plans on building hydroelectric power plants on the Yenisei and in other regions.” Monday’s accident, it adds, causes doubts with respect to both the existing hydroelectric power plants and those still under planning.

These plans, Greenpeace Russia reminds, include the already ongoing construction of Boguchanskaya plant and projects for several more HPPs such as Nizhneangarskaya and Motyginskaya on the Angara river, a chain of hydropower plants in Yakutia, and Evenkiiskaya, which is envisioned to be Russia’s next largest.

Ecologists argue that Evenkiiskaya’s project, thought up initially in the 1980s but then shelved for both economic reasons and because of poor research into major potential environmental risks, has since seen little development and presents a blueprint for another environmental catastrophe. The construction, they say, will flood thousands of hectares of unique forests and kill whole areas of traditional uses of natural resources, thus threatening the well being of local indigenous Evenki settlements.

“One of the versions of the dam leads to a catastrophic flooding of the right bank of the Yenisei as a result of an overtopping over the watershed. The stability of dams in permafrost conditions raises doubts, too,” said Greenpeace Russia’s energy programme head Vladimir Chuprov.

“Ecologists are trying to prevent looming accidents and fatalities, the huge damage to the population and the environment, but instead of a constructive dialogue, RusHydro accuses its opponents of extremism. By the way, we see this as a confirmation that we are right. Because, when there are no counterarguments, that’s when a witch hunt begins.”

Chuprov was referring to a lawsuit RusHydro initiated last July against a regional public initiative called No to Dam! (Plotina.Net!) over an April article the movement had posted on its website. The story spoke, in part, of what lengths the indigenous evenki people – over 80 percent of whom are, according to No to Dam!, staunchly against the Evenkiiskaya project as it threatens their very survival – might be willing to go to to defend their traditional territory and lifestyle. Local prosecutors dropped the case after a linguistic analysis showed it had no merit.

Svyatoslav Zabelin, co-chairman of the council of Russia’s Socio-Ecological Union, has been quoted in the press as saying: “For Russia, going back to the construction plans of gigantic HPPs is a relapse to the 1930s, with all the disregard of the value of human life characteristic of that time.”

In light of the August 17th disaster, Greenpeace Russia has demanded that the Russian government reconsider its energy development programme mapped out until 2020 and drop the plans for “the most environmentally dangerous sites such as Evenkiiskaya” and similar projects.