MURMANSK – Russia’s northern region of Murmansk will start producing wind energy converters – this was the gist of an informal agreement reached between the local submarine repair yard Nerpa and the Dutch company Windlife Energy. A formal deal between the two parties is to follow soon.

Published on July 15, 2009 by Alexey Pavlov, translated by Maria Kaminskaya 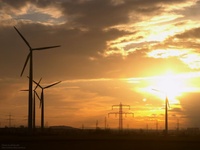 As has been previously reported by Bellona Web, Murmansk was recently the host of a business seminar visited by the heads of over 30 Dutch companies. The delegation also included the Netherlands’ Minister of Foreign Trade Frank Heemskerk. In the two days the visitors spent in Murmansk, the Dutch businessmen met with the governor of Murmansk Region, Dmitry Dmitriyenko, and representatives of the region’s largest enterprises.

The seminar put its primary focus on cooperation in the energy sector – issues such as the development of the Shtokman natural gas field in the Barents Sea or the construction of the Murmansk Transport Hub were on the table. And, of course, participants discussed the only project already under way – the construction of the first wind park on the territory of the Kola Peninsula, an endeavour led by the Dutch-based Windlife Energy. Investments into the project will come from two European banks and a jointly held Dutch-German banking group.

“They are ready to invest money into the production,” Windlife Energy’s owner Paul Logchies said. “Basically, we are taking things to a new level now – working with our partners in Moscow to create a whole industry of windmill production in Russia.”

Before such broad-reaching plans are realised, though, the Dutch business will have to see to the organisation of a local production of wind energy converters: Delivering such installations from Europe is a much costlier option. The converters will become the responsibility of Nerpa, an erstwhile leading shiprepairing yard in Russia’s Northwest that is currently mostly involved in the decommissioning of old Russian nuclear submarines.

“The scope of this order is very interesting to us,” Alexander Chekovskikh, Nerpa’s head of the engineering centre’s preproduction service, said in a statement to the press.

“But something else is more important still: This order will provide a certain development to our plant. In the recent years we have mostly been cutting up vessels. Now, this is a renewal.”

The remaining steps to take before an official agreement is signed will be assessing wind force potential, elaborating the designs, and settling upon specifications for the production of masts for the future wind turbines.

The output capacity of the new park – which is planned to be erected along the Murmansk-Tumanny-Teriberka highway – is estimated at 620 gigawatt per year. Murmansk’s foreign partners are investing EUR 320 million into the project, with the reported payoff period of seven years. What the region will have in return is a cleaner environment, taxes flowing into the consolidated budget, and no fewer than a hundred new jobs.

All this has earned the project the support of Governor Dmitriyenko.

“[Russian] President [Dmitry] Medvedev has set the task of drastically increasing energy efficiency of the economy in the next five years, while cutting power consumption by 20 percent. The budget for 2010 will already have to provide for all these instructions,” the governor said to the press.

“This is exactly where the Dutch will help us. Even this wind park that is being created now, it is a renewable source of energy, it is environmentally clean, and this makes for one of the fundamental parts of energy efficiency.”

Several years will have to pass before these cooperation plans yield concrete results. A year will be spent on legal paperwork prior to contract signing, as well as what is needed to complete the preliminary design stage. As far as the actual construction is concerned, on-site works can be expected to start only in 2011.

This report was contributed from Murmansk by Alexei Pavlov.