WASHINGTON – International oil giant Exxon Mobil, with the help of biotech company Synthetic Genomics, has made a major leap into renewable energy, infusing $600 million into research on algae-based biofuels produced from sunlight, water and CO2. 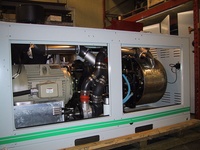 The move is a major one from Bellona’s point of view, which has long championed the use of algae based biofuels as one of the key elements in combating global warming.

In August, Bellona, whose president Frederic Hauge has been one of algae energy’s most aggressive supporters, began cooperation with the Dutch firm AlgaeLink, which is working on algae based fuels for KLM Royal Dutch Airlines.

The US Senate, meanwhile, has postponed its vote on President Barack Obama’s climate bill passed by the House of Representatives in June. While much debate is expected in the Congress’s upper chamber, two key democratic senators have vowed to keep the bill on the public radar during the Senate’s August recess and to push for its quick passage.

If successful, the partnership, which is expected to last six years, will create economical fuels for cars and other vehicles from photosynthetic algae, providing a renewable oil substitute to replace fossil fuels.

"The world faces a significant challenge to supply the energy required for economic development and improved standards of living while managing greenhouse gas emissions and the risks of climate change," said Emil Jacobs, vice president of research and development at Exxon Mobil Research and Engineering Co.

Exxon said it will use half the $600 million for its own research, and provide up to $300 million to Synthetic Genomics, depending on whether certain research goals are met, a spokesman told Bellona Web in a telephone interview.

Exxon Mobil’s collaboration with Synthetic Genomics will last five to six years, Jacobs said, and will involve the creation of a new test facility in San Diego to study algae growing methods and oil extraction techniques. After that, he said that the company could invest billions of dollars more to scale up the technology and bring it to commercial production.

Jacobs said, “It’s fair to say that we have looked at all the biofuel options. Algae ended up on top.”

"We’re not claiming to know all the answers," said Craig Venter, founder and CEO of Synthetic Genomics, which has so far done early work on algae strains. "There are different approaches to what is truly economically scalable, so we’re testing things and giving a new reality to the timelines and expectations of what it takes to have a global impact on fuel supply," he told Greenwire.

Jacobs and Venter have remained closed- mouthed about the specific technology the collaborative effort would employ. They said the team would investigate all options, including growing organisms in open ponds and in closed photobioreactors.

They added that they were likewise uncertain what end-product fuels would result from the collaboration. Other startup companies were reported by Greenwire in April to have announced that they were producing both synthetic crude and biodiesel using photosynthetic algae.

The significant investment is expected to validate the algae biofuel industry, said Riggs Eckellberry, president and CEO of OriginOil Inc., another company that has been working on breakthroughs with algae fuel technologies, in remarks cited on eon.businesswire.com.

"A couple years ago, the petroleum institute said there’s only (20) years left for oil, and now they’re really finally acting on that. Algae is the feedstock to overtake petroleum. It’s the real alternative to petroleum."

At the same time, Eckelberry’s commentary also told “Biodiesel Magazine” that “Algae is now being validated as a legitimate feedstock. It is going to have a long-term outlook with an investment like this.”

Scientists in San Diego’s biotech community, where Synthetic Genomics is based, said the deal is a major step toward making the region a leader in developing algae based fuel. Four major research institutes recently created the San Diego Centre for Algae Biotechnology to advance the goal.

“This is a watershed event for algae biofuels – once the big companies get in, the way Exxon has,” said Stephen Mayfield, a biology professor who studies algae at the Scripps Research Institute, a member of the algae biotechnology centre. Others are the University of California at San Diego, the Scripps Institute of Oceanography, the Salk Institute and San Diego State University.

“I don’t know what $600 million is in terms of (Exxon’s) total investment, but it’s a big number – it’s a serious commitment,” said Mayfield.

Some US Environmentalists were more cautious in their appraisal of the Exxon Mobil-Synthetic Genomics plan.

"They’ve never done anything like this before – invested real money in the renewables sector," Kert Davies, research director at Greenpeace, told the New York Times. "We’ve always said (the oil industry) has to be part of the climate change solution. We can’t solve anything without companies like Exxon helping."

He added, "I’m guarding my optimism."

Exxon Mobil’s timing is noteworthy, Davies said, because of the ongoing energy and climate legislative fight.

"It’s interesting timing as the oil companies are struggling to find a place at the table," Davies said.

For the time being, the lobbying and jockeying for position will likely continue, even as the US Senate goes on recess, shelving further debate until autumn on US President Barack Obama’s cape and trade bill.

Even though the mark-up of the bill has been postponed, Barbara Boxer, California Democrat Senator, and Chairwoman of the key Senate Committee is writing key pieces of the Senate climate bill with the aim of bringing a bill to the Senate in September. 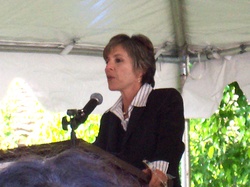 Boxer had initially hoped to put the bill to a committee vote prior to the August recess, but Washington has been sidetracked over debates on health care reform.

Details of Boxer’s climate legislation are under wraps. But Boxer has said that she will use the legislation that passed in the House as a basis for negotiation.

That bill set a 17 percent cut in US CO2 emissions by 2020 compared with 2005 levels. Senate Majority Leader Harry Reid,Nevada’s Democrat Senator, passage of new climate legislation before the end of the year. Reid has set a September 28th deadline for committees to finish work on the bill.

There is debate about whether Congress will meet this timetable. It is unclear whether the Democrats can muster the necessary 60 votes for a bill that will draw opposition from Republicans and possibly a dozen or so moderate Democrats.

Capitol Hill debate will be key to Copenhagen success.

But pressure is mounting on Congress to show progress on global warming legislation before the UN climate summit in December in Copenhagen, and Capitol Hill debate will be the key to success.

“I would love to have as much progress on the law by the time of Copenhagen as possible” said Todd Stern, President Obama’s top climate diplomat. “If it can be done by Copenhagen, that would be great.”

President Obama must be mindful of going to Copenhagen without a law and signing up to an agreement that does not have the support of Congress. There would then be a risk that Congress would reject the treaty as they did in 1997 with Kyoto.

Which direction Congress will lean will not be known until the September.