MURMANSK – Bellona Murmansk held the second in a series of seminars on renewable energy, focusing on experience with the energy sources gained by Russia and Norway, the economic and legislative constituents of such energy sources, and scientific research in the renewables sphere.

Published on October 24, 2008 by Anna Kireeva, translated by Charles Digges

Special emphasis was placed in the seminar on energy supplied by wind and biomass and their applications in Northwest Russia.

“The proposed forum –  a cross-sector forum in which all interested parties meet, proved its effectiveness,” said Andrei Ozharovsky, a nuclear physicist and activist, and forum participant, from the Moscow-based Ecodefence.

“It is now apparent that the government of the Murmansk Region has matured to the point of developing wind energy, the construction of wind parks,” he told Bellona Web.

“In the recent past, Russia has begun to actively develop renewable sources of energy, they have more and more adherents one regional and federal levels,” she said. “We are, of course, happy about this.”

Renewables development in the Murmansk Region
Within the framework of the forum, aside from the plenary session on potential for renewable energy in the region, a working group on bio-energy and wind energy took place.

Participants in this group represented successful experience with projects that are slated to materialise in the region.

The participants formulated a list of fundamental problems for renewable energy in the region and possible solutions to them. Among the problems was the lack of a legislative base for renewable energy, a lack of clear priorities for investors, the absence of a government support system, and insufficient production of wind and bio-energy installations in Russia. 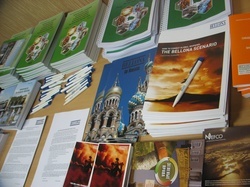 The Murmansk Region is currently planning to implement a number of projects aimed at building wind parks. The company Windlife Energy – with Dutch capital – is slated to build a 200 megawatt wind park near the Kola Peninsula village of Teriberka, and the Russian Company Russky Veter (Russian Wind) is planning a 100 megawatt wind park in the Pechenga Region, near Arkangelsk.

“In the framework of the forum, many projects for renewable energy were presented,” said Lesikhina.

“The construction of the wind park in Teriberka and the Pechenga regions, tidal electric stations in Dolgo-Vostochny Bay, bio-boilers in Umba and Tyuloma – all of this speaks to the fact that the state and business acknowledge the necessity of developing renewable energy as an environmentally safe and sustainable alternative to traditional energy plants,” she said.

Denis Pochikov, a gas and oil consultant of the industry and transport department of the Murmansk Regional administration said that another Dutch firm has signed on to build another wind park in the region.

“The government of the Murmansk Region completely support the development of renewable energy sources on the Kola Peninsula and is prepared to offer companies all possible assistance within the boundaries of existing legislation,” said Pochikov.

“Regions don’t want to run ahead of the federal centre. There is either no desire, or there is a fear or an apprehension of running ahead of the centre and being punished for it,” said Larin.

Another reason for the foot-dragging, he said, is that regions still receive subsidies for fuel delivery, and this opens wide doors for corruption. For precisely this reason, many regions simply forbid the construction of wind parks and other renewable energy installations.

“Therefore, adoption of local legislative acts is the first thing that needs to be advanced in the consciences of leaders on all levels who are in command of legislative possibilities,” he said.

”It could be that new ones will have to be built, ” he said.

An amateur approach to renewables in Russia
Even though in the rest of the world, renewable energy has become a profitable business, Russia is only now developing conditions favorably to its development.

“In Russia, the approach to wind energy is still amateurish,” said Paul Logchieis, director of Windlife Energy, which will be building the Murmansk Region’s 200 megawatt wind park. “In many other countries, renewable energy is regarded as a serious and profitable business.”

“In 2001, when we first looked at the Kola Peninsula with the aim of building a wind park there, Russia had practically no energy legislation relative to renewable energy,” Logchieis said.

Commenting on the recent assertion made by Hervé Madeo, a top representative of Shtokman Development, that building a Wind Park in the village of Teriberka, where much power will be needed to run a gas condensate plant, Logchieis said: “I will give the company all our research and results – of course a plant will never use wind energy as its fundamental source of energy,” said Logchieis. “But I would do everything possible to convince Madeo that wind installations for the plant would be cheaper than gas pipelines.”

Shtokman Development will be developing the Barents and white sea Shtokman field, an underwater oil and gas condensate field that has become Russia’s newest resource gold rush. A gas condensate plant will be built in the village of Teriberka, near the planned wind park.

Valery Minin, deputy director for scientific studies at the Centre for Physical-Technical Energy Problems in the North of the Kola branch of the Russian Academy of Sciences, said that the planned winds parks for Murmansk should be viewed as a pilot project.

“Therefore, the project should be treated extremely carefully and precisely, the site for its construction chosen very carefully,” said Minin. “If the project turns out to be a failure, it could turn Russia off experience with wind energy development for a very long time.”

“The problem with farming outflows has always existed in Russia, Europe and the United States,” said Larin, the energy safety expert.

“Now there is an opportunity to deal with the wastes of animal farming, using them for the production of bio-gas and fertilizer – despite the number of farms we have here in Russia, there are no bio-gas farms,” he said.

Energy based on manure in Murmansk has not been developed at all. The region is home to five enormous agricultural and dairy enterprises. According Andrei Alexeyev, director or the Tyuloma group, the Murmansk region was last year the most productive region in Russia’s dairy sector.

The collective farm enterprise in the region is comprised of around 2,000 heads of cattle. The enterprise also owns some 1,500 hectares of land, which is fertilized by a small portion of this manure. The cost of running the dairy farms approaches about 2 million roubles ($70,000) a month, which hardly allows the collective farm to develop bio-waste collection on a large scale for potential energy production.

For this, the collective farm would require am industrial scale bio-gas installation to produce electricity – the cost of which would be somewhere around €2 million ($2.7 million)

“We will find the money – we have the desire to put a installation up, we don’t see any legislative obstacles, “ said Alexeyev. “However, I have not found a company in Russian that can produce a normally functioning bio-gas installation. We have been to all possible industry trade shows in all parts of the world, studied the equipment  – and it’s all good, but the equipment has not be applied in Russia.”

He said that they have not been able to find anyone to build them such an installation.

“I don’t need a pilot project – I need a functioning installation,” said  Alexeyev.

He said that ordering equipment from Western companies without representation in Russia is unprofitable.

“Customs clearance kills all financial constituents of the project,” he said.