MURMANSK – Despite the near absence of a legislative base on which to develop renewable energy in Russia, Regional administrations as well as private firms are taking independent strides to use wind power installations for energy production.

Published on September 14, 2008 by Anna Kireeva, translated by Charles Digges 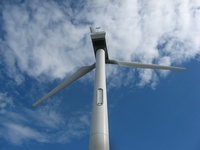 “We have tried to use wind installations on our vessels to charge alkaline batteries,” said Nikolai Filipyev, the company’s chief engineer, in an interview with Bellona Web.

He said that lighting the interior of barges, electrical appliances on board, and the spot lights on one barge requires 20 alkaline batteries that must be recharged every one and a half to two months.

“After the installation of one windmill (for the battery recharging) on one vessel we noticed that less battery power was required,” said Filipyev.

Filipyev, however, complained that it was difficult to find wind power installations that were suitable for maritime purposes in Russia.

“At present, we are trying different variants, but the chief problem is that both installations function poorly in maritime conditions. The wind at sea is very strong, changes sharply, and the installations have no mechanism to adapt. They frequently break down,” he said.

But, Filipyev noted that the company will continue to pursue this project, though they are not currently seeing very positive effects.

“We will continue to search for different kinds of rigs, and I am sure it will all work out,” he said.

The idea of using wind installations at sea is not new. Twenty-five years ago, during Soviet times, river tow barges applied wind energy for the electrical needs of the crews.

Nevertheless, it is too early to speak of global wind energy use in Russia. By comparison, the European Union plans to put 20 percent of its fuel balance on renewable sources of energy.

Russia’s plans are more modest. RusGidro, which is responsible for renewable energy, plans to boost the contribution of renewable energy sources by four to five percent of the country’s entire energy balance. It is possible that the State Duma will in its fall session adopt a raft of legislation that will further enable the renewable energy strategy.

The strategy itself has already been adopted as a federal law, which envisions concrete measures of support for energy generated by renewable means. The law also allows for a special federal budget subsidizing the costs of plugging renewable energy sources into Russia’s power grids. Amendments to the law allow for special incentive awards to market tariffs that will be paid to all renewable energy generators whose power levels are lower than 25 megawatts.

The law also provides for the introduction of a system of “green certificates” that will establish that energy installations are clean, and which will serve as the foundations for awarding incentive awards to energy tariffs for renewable sources.

Monowai Energy Managing Partner Vadim Rezvy said the economic potential of wind energy alone in Russia is equal to 260 billion kilowatt hours a years – that is about 30 percent of all energy production of all electric energy stations in Russia.

Nina Lesikhina, Bellona Murmansk’s energy projects coordinator, said that for the development of wind energy in the near future, an effective legislative base that will spell out technical regulations and subsidizing mechanisms for the industry is necessary.

“Without this, neither Russian companies nor western investors will succeed in initiating large scale use of ecologically clean energy sources that can and must become the alternative to dangerous nuclear energy and polluting coal energy,” she said.