An international seminar on renewable energy solutions for Northwest Russian hosted by Bellona Murmansk and the Bellona Foundation ended on a high note as regional authorities, environmental organisations and businesses got their first extensive look at renewable energy options for the Arctic region. 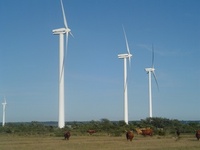 The forum was entitled “The Development of Renewable Energy Sources in Northwest Russia: Possibilities and Perspectives."

One important thrust of the renewable energy forum was finding alternative solutions not only to traditional gas and oil fired plants, but nuclear power as well, which Bellona does not consider a viable and safe method for fighting greenhouse gasses.

At present, Russian gas mammoth Garprom’s efforts toward drilling the Shtokman oil and gas condensate field off the coast of the Murmansk region in the Barents Sea include the construction of two new nuclear reactors at the Kola Nuclear Power Plant – a plant which has been a danger to the region for years but which has also supplies much of the area’s energy.

Gazprom has also stated its intention to use floating nuclear power plants to deliver power to the far flung underwater gas field, raising cockles environmentalists and the Murmansk population as well, who expressed an 80 percent opposition to new nuclear power projects on the Kola Peninsula in a recent survey.

“Bellona is looking at renewable energy in Northwest Russia as an alternative to nuclear energy and fossil fuel energy,” said Bellona Murmansk’s energy project coordinator Nina Lesikhina at the forum. 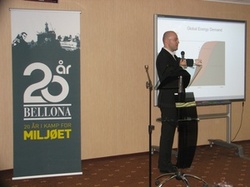 Bellona organised this conference on renewable energy and established The Northwest Russia Renewable Energy Forum with support from the following sponsors: The Norwegian Barents Secretariat, The Research Council of Norway, The Royal Norwegian Consulate General in Murmansk, The British Consulate General in St. Petersburg, Sør-Varanger Kommune, NBT AS, Varanger Kraft, Alta Kraftlag A/L and Ishavskraft AS.

Pleased with interdisciplinary discussion
“It was very pleasing for us to see the interest of the regional government not only in participating in the forum but in their positive attitude toward the development of renewable energy sources on the Kola Peninsula,” Michele Grønbech, a consultant with Bellona’s Oslo office said at the Murmansk press conference that wound up the seminar on Friday.

Lesikhina said the regional administration understand that renewable energy could become a new economic powerhouse in the area.

“This is a big step forward by the regional government,” she said.

Sergei Leus, assistant director of the Murmansk Regional Government’s Department of Industry and Transport, who attended the forum, told Bellona Web that Murmansk governor Yury Yevdokimov “has long ago come to believe in the necessity of the development of renewable energy in the region.”

Leus said the regional administration has long worked to secure potential investors wishing to support wind energy in the region but that the search has proved to be an uphill battle – until recently.

“Now we have come to a qualitatively new step – we have agreements with a Dutch company (Wind Life Arctic) to build a 200 megawatt wind park,” said Leus.

Wind Life Artic, as per the agreement with the Murmansk administration, will be establishing an eponymous company in Russia in order to take on the 200 megawatt wind park project. Wind Life and Murmansk officials have said.

There remain questions as to whether wind power can fully make up for the energy provided to the Murmansk area by nuclear and fossil sources, Valery Minin, assistant scientific director at the Kola Peninsula office of the Russia Academy of Sciences said.

But he conceded that the addition of a wind park would take the some of the burden off the dangerous Kola Nuclear Power Plant and make unnecessary planned engineering life span extensions for aged reactors there.

Practical results
The immediate practical results of the forum, said its organisers, were the new inroads that put the business, scientific and government spheres that took part in the forum into conversation with one another.

“Our task lies in the creation of conditions favourable for meetings and discussions. We was that all sides are ready to be included in this process,” said Groenbeck.

The results of the forum were summarized by the organisers in a memorandum written by Bellona. It says that in order to form solid foundation for the development and realisation of renewable energy potential for Northwest Russia, Bellona will take the initiative to establish regular multifaceted forums like this as an arena of multifaceted dialog, cooperation and solving problems in this direction.

The second renewables forum to be hosted by Bellona Murmansk and Bellona Oslo is slated for autumn of 2008, Lesikhina said. She said that those who participated in last week’s forum have already expressed interest in further such forums, which underscores their importantance, necessity and timeliness.

“The forum was a solid basis for mutual action which, I hope, will lead to the realisation of concrete projects,” said Vitaly Servetnik of Murmansk’s Nature and Youth environmental organisation.

The proof is in this wind
Servetnik said the official launch of a windmill in Murmansk last week, power from which will be pumped into Murmansk’s commercial electrical grid is a significant step in demonstrating the cost effectiveness and environmentally friendliness of alternative energy sources.

“Now it is time to build wind parks, and 2020 (the target date for construction a Kola Peninsula wind park) is just over the horizon,” he said.

In 2006, Murmansk Regional Governor Yury Yevdokinov signed at the behest of local environmentalists an agreement in the name of the local government stating that 20 percent of Murmansk’s energy needs would be fulfilled by wind sources by 2020.

Anna Kireeva reported from Murmansk, and Charles Digges, translated and wrote from Oslo.