BRUSSELS/CALIFORNIA – As a leading US state in environmental protection and alternative energy, California wants to build a large, effective and state-of-the-art solar energy farm in the central Californian city of Fresno. 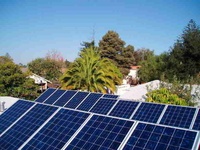 Large power output
The planned solar farm was announced on July 6th, and is expected to be put into operation by 2011. It will be built by the power company Cleantech America LLC, in cooperation with the California State Government agency, the California Construction Authority. It is expected to generate 80 megawatts of power, and will be seven times the size of the largest solar energy plant in Europe today.

The power could potentially serve 21,000 homes in the California Central Valley, making it an industry scale project. This is one of two new projects the company has planned, the other being a five megawatt plant – also in California. It is furthermore expected that the company will announce more power plants in the 80 megawatt scope in the near future.

"We’re pretty confident that solar farms on this scale are going to have an industry-changing impact, Bill Barnes, CEO of Cleantech, told Reuters.

“We think it’s the wave of the future. This scale of project, I think, creates a tipping point for renewable energy."

International competition
California is not the only part of the world launching solar energy projects. As the globe is warming, more countries want to take the lead in developing alternative energy sources. Germany has had a boom in the solar industry the last two years after the country passed a law on renewable energy, securing a minimum price for solar energy suppliers. Germany accounts for 80 percent of the European market in solar energy, a market that has been growing 40 percent per annum the recent years.

“The proposed 20 percent use of renewable energies in our energy mix would significantly contribute to reducing the European Union’s total emissions of greenhouse gases by 20 percent by 2020,” European Commissioner for the Environment Stavros Dimas, said.

“Solar and wind power are exemplary in this respect since they do not pollute the air, water or the soil.”

In Asia, it seems promising that Japan is another global leader in the solar power industry. It is now hoped that the urgency of global warming, together with financial incentives, will help to increase the renewable power output in the whole Asian region. This is especially the case in China, as it is the world’s largest polluter. The global increase in research and development in alternative energy sources sends out a positive signal in the fight against global warming.