Russia late last week set the Severodvinsk, the most expensive nuclear submarine it has ever produced, to a another round of sea trials in hopes of testing its rickety missile launch systems and seeing if some 2000 other kinks identified in earlier trials have been worked out, Izvestia reported.

Published on November 5, 2012 by Charles Digges 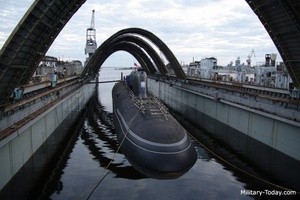 Photo: Courtesy of the Barents Observer

The vessel is carrying a crew of 90 and is expected back at port on November 25.

Under construction at the Sevmash shipyard near Arkangelsk for 20 years, the Severodvinsk– designated by the identification number K-329, and the first of the project 885 Yasen Class – the sub was to have been passed to the Russian Navy by in 1998, after first construction began on it in 1993.

Several missed deadlines later, the boat was to be launched in 2010. That was then delayed until 2011 and then 2012. Now, reports in Izvestia, indicate the sub likely will not be ready until summer of 2013.

In this latest round of sea trials, the Severodvinsk will be undergoing winter tests in the Barents Sea, as well as accomplishing deep diving to test the reactor system and ballast tanks, an unnamed naval official told Izvestia.

Most importantly – and perhaps most alarmingly – the submarine will attempt three missile launches to test launch systems that sea trials last autumn, whose results were disclosed over the summer, revealed were untested and outdated, an earlier report from Izvestia indicated.

It remains unclear what kind of missiles the Severodvinsk will be testing, but schematics of the submarine released by the RIA Novosti news agency show it is capable of launching two types of missiles – nuclear capable missiles with a 5,000 kilometer range, as well as anti-ship cruise missiles.

Other reports have said the Severodvinsk is capable of being outfitted with 24 supersonic Onyx anti-ship missiles that can destroy an aircraft carrier in one blow, and 10 torpedo tubes for launching self-guided torpedoes.

The sub is also expected to have an undersea speed of 30 knots and a maximum submersion depth of 600 meters. It is designed to sustain autonomous voyages of up to 100 days.

The price of the submarine, including tests and construction, weighs in at some 70 billion rubles ($2.2 billion). This puts a heavy strain on Russia’s military defense budget, said Bellona’s Igor Kudrik, an expert on Russia’s nuclear submarine fleet, especially when the Navy is planning on building another seven of the Yasen Class by 2020.

The next scheduled for production in the Yasen line is the Kazan, with an estimated price tag of 110 billion roubles –nearly twice as expensive as the Severdvinsk, a naval official told Izvestia. The Kazan is of a different design than the Severodvinsk, thus accounting for the price difference, noted Thomas Nilsen, an expert on Russia’s Northern Navel Fleet and editor of the Barents Observer news portal in Kirkenes, Norway. Prices for serial production of the remaining Yasen Class subs are then expected to stabilize at 70 billion roubles.

Why all the firepower?

Russian is jealously guarding its claim on the arctic for many reasons, and over the summer, President Vladimir Putin, in a visit to northern shipyards stumped for submarine protection of enormous untapped oil and gas reserves beneath Arctic waters.

The Northern Sea route is also another source of revenue for Russia, halving the time it takes to transport loads from the West to the Far East that it takes to do so via the Suez Canal.

But Russia clearly has a view to turning the Northern Sea Route into a sort of toll road, with Rosatom insisting that its nuclear icebreaker fleet accompany convoys for rates only slightly less expensive than the Suez route. Increased sub patrols, some in the Russian Navy have suggested, could also offer a sort of sub-sea police service.

“President Putin loves toys with price tags surpassing the size of Russia’s wallet. But this is the problem of Russian taxpayers who should draw certain conclusions when they cast their votes,” said Kudrik. “Our concern is planned militarization of the Arctic which not only is not going to make it safer, but pose additional dangers with respect to the environment as well.”

The Severodvinsk’s missile system is not the only concern that has earlier been cited by the navy. Sea trials over the summer revealed the vessel’s operation was noisy – which is far from ideal for the stealth conditions under which subs operate – and that the new generation reactor was simply not powerful enough for the sub’s water displacement of 13.8 tons.

For comparison, that makes the Severodvinsk twice as large as its biggest US competitor the US Navy’s Virginia Class attack submarines, the first of which was commissioned in 2004.

The Severodvinsk, whose blueprints were laid during Soviet times, therefore represents something of a return to large-scale Cold War displays of might – costs be damned.

“After years of construction and sea trails, some systems in both subs have significantly deteriorated,” Kasatonov told the radio station, referring to the Severodvinsk and the Yury Dolgoruky.

“The subs cannot be commissioned until all problems of this kind have been fixed.”

Kasatonov reported that the Severodvinsk returned from its autumn sea trials last year with some 2,000 design defects that were identified by the crew. Should al of these defects have been addressed, the submarine can put to sea by 2013, the Barents Observer reported.

When construction for the Yury Dolgoruky began at the Sevmash shipyard in 1996, its building began by taking the four-year-old hull of an Akula Class submarine and adding to it to enlarge it, said the Barents Observer.

The second submarine of the Borei Class of submarines under construction is the Alexander Nevsky – also built on the foundation of an old Akula hull – is expected to be complete by 2014, said the portal.

A total of three Borei Class subs are supposed to be launched by 2015.

Both the Alexander Nevsky and the Yury Dolgoruky were initially scheduled for deployment in Russia’s Pacific Fleet. Infrastructure construction delays at their prospective Pacific port, however, have changed those plans, said the Barents Observer, noting that at minimum, the Yury Dolgoruky would be stationed temporarily at the Nortrhern Fleet’s Gadzhievo based Northwest of Murmansk.

Kudrik did not expect the new round of sea trials would lead to expedited launch dates, especially for the Severodvinsk, which as the chief representative of a new sub class, is already past its prime.

“Soviet and Russian submarines have always being noisy due to the poor quality of building materials,” said Kudrik. “The reactor plant installed on this submarine is of newer design and it seems to be suffering from not being properly tested. Russian industry has been in shambles ever since the collapse of the Soviet Union and recovery is protracted and painful,” he said, adding, “This new submarine is an example of how bad things are.”