MURMANSK – Russia’s 50 Let Pobedy (Fifty Years of Victory), the flagship of the Russian nuclear icebreaker fleet, departs on January 27 from its port of registration, Murmansk, setting out on a voyage to the Baltic Sea, where it is expected to convoy capsize bulk carriers calling into ports of the Gulf of Finland – a prospect that has Russia’s northern neighbors concerned over the risks of a nuclear vessel passing along their coastlines.

Published on January 27, 2012 by Anna Kireeva, translated by Maria Kaminskaya 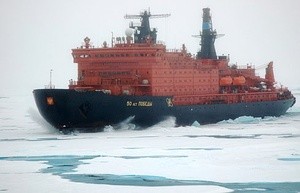 This year, the 2007-built 50 Years of Victory has been chartered to escort cargo ships in the Baltic Sea for a period of 100 days – a second such contract sought by the federal state-owned port development enterprise Rosmorport since the extremely challenging ice situation in the gulf last winter, when the 1989-built icebreaker Vaigach (or Vaygach) was urgently dispatched to this heavy-traffic shipping area and remained there for 51 days, steering over 260 commercial vessels out of the treacherous ice traps to their destinations.

According to information on the official website of the Russian State Nuclear Corporation Rosatom, which has purview over the Russian nuclear-powered icebreaker fleet via its entity called Atomflot, this year, a special communications system has been introduced to coordinate the 50 Years of Victory’s movements  and monitor all incoming requests for pilotage in real time – a step that is expected to help streamline the steering operations.

Once in the Baltic Sea, the 50 Years of Victory is expected mostly to aid the passage of heavy-tonnage tankers with a draft greater than that of the icebreaker, said Atomflot’s deputy general director for fleet operation Andrei Smirnov.

The Arktika class icebreaker’s dimensions are similar to those of the Vaigach – around 30 meters across the beam – while the additional ten meters in length overall that the 50 Years of Victory has over the Vaigach should not affect its maneuverability, Smirnov said: The vessel is considerably more powerful than the Vaigach, which is a river icebreaker of Taimyr class.

Launched in 2007, the 50 Years of Victory is touted as Russia’s newest and largest, a vessel that is unrivalled in the global commercial icebreaker fleet. It has two reactors on board with a combined power capacity of 54 megawatts, yielding around 75,000 horsepower, and is commonly used to convoy ships moving along Russia’s Arctic coastline. In 2008, it was also chartered for a series of passenger cruises to the North Pole.

The icebreaker is scheduled to spend three or four days moving along Norway’s western and southern coasts, after which it will appear on the Danish and Swedish radars, and will then enter Finland’s territorial waters the following week.

The Norwegian authorities are expected to monitor the 50 Years of Victory’s progress with special attention. Once out of Murmansk’s basin, the world’s largest icebreaker will head westbound toward Norway’s Nordkapp, then turn southward and move along the coast until it reaches the Skagerrak, a strait lying between the southwestern coast of Sweden and Denmark’s Jutland Peninsula, with Norway’s southern coast just up north. The Skagerrak connects the North Sea with the Kattegat sea area, which leads out into the destination area, the Baltic Sea.

In a conversation with Bellona, Atomflot’s press service admitted the operator company was somewhat baffled by the nervousness Russia’s neighbors have shown with regard to the icebreaker’s anticipated route.

“Both the ministries of foreign affairs of the [concerned] European countries and Finland’s Radiation and Nuclear Safety Authority (STUK) were informed already in mid-January about the deployment of the nuclear icebreaker in the Gulf of Finland within the specified period,” Atomflot’s press service told Bellona.

Atomflot believes the concerns – specifically those expressed by Norway – may have to do with a rescheduling that will delay the icebreaker’s entry into the Gulf of Finland.

“The delay was due to planned maintenance. Last night, the icebreaker left for a trial trip in the vicinity of the island of Kildin, it returned to Murmansk late at night, and is currently departing from its registration port, Murmansk, and is on its way to the Baltic Sea,” a representative of Atomflot’s press service told Bellona on Friday, January 27.

Bellona’s expert Igor Kudrik said Norway is hopeful that “nothing serious will happen at the reactor plant on board of the icebreaker as it travels along the Norwegian coast en route to the Baltic Sea.”

He said the good news is that because the vessel has a displacement of over 5,000 tons, the icebreaker’s operator company has an obligation to inform authorities in Norway of the details of the passage, and the relevant services will be able to instruct the crew on a route lying at a sufficient distance from the shoreline.

The Norwegian Radiation Protection Authority’s Yngvar Bratvedt told Bellona that his agency was ready to respond should something go wrong and will closely watch the icebreaker’s movements.

“We will keep the radiation safety agencies of other Nordic countries informed in due manner. We will also keep [regional] administrations and emergency committees informed,” Bratvedt said.

Should an accident develop on board the 50 Years of Victory, the captain is to notify the authorities of the state near which the icebreaker is passing. According to Bellona’s Kudrik, however, Norway’s coastal guards do not have experience responding to accidents on nuclear-powered vessels with reactor systems in distress.

This is the cause of the concerns Norway is having regarding the 50 Years of Victory’s passage along its coastline, and they may not be completely without reason: Last December, a fire broke out on board of the Vaigach, killing two crew members. And in May last year, loss of seal in a welding seam led to a coolant leak in the primary loop of the reactor on board of the Taimyr (or Taymyr), a sister river icebreaker of the same class as the Vaigach. And another accident on board a nuclear vessel contributed to the less than perfect record of Russia’s nuclear fleet last New Year’s eve – this time, a fire involving a Delta-IV-class nuclear-powered submarine, the Yekaterinburg, while it was docked in a shipping yard near Murmansk.

Bellona’s nuclear and radiation safety Nils Bohmer says these are all incidents that have both the Oslo-based environmental NGO and authorities in Norway worry about potential risks associated with nuclear vessels.

“We fear that such incidents may also be possible on board of the 50 Years of Victory, which will be moving quite close to the Norwegian shore,” said Bohmer, himself a nuclear physicist. “Weather conditions [here] in winter could be rather severe. One wouldn’t want any accidents to happen on that vessel while it’s on its way passing near Norway.”