There are currently six dumping grounds for boats in the Barents Sea’s Kola Gulf, to say nothing of individual sunken vessels and fragments. The supports of the aged Hutton oil rig are also neglected and its owners are ducking their responsibilities, while ecologists are sounding the alarm.

Published on November 1, 2005 by Anna Kireeva 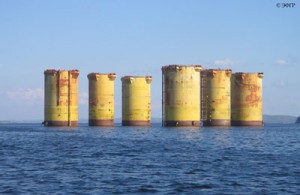 A report on ecological problems affecting coastal areas of the Murmansk Region was presented on Tuesday in Murmansk. Using the Kola Gulf as an example, the report, by the Environmental Harmony Evolution Fund and the World Wildlife Fund (WWF), investigates problems of dealing with abandoned and sunken boats, presents ecological monitoring data from the Kola Gulf, and makes recommendations on reducing the ecological effects on the area.

According to report author Vladimir Bakharev, the main problems are a lack of control at every level of the executive branch and that no governmental structures have been made responsible for dealing with abandoned marine vessels. Both diesel-powered submarines and oil-rig legs are currently left unsupervised.

Hutton oil platform
The Hutton oil platform arrived in the Kola Gulf three years ago. The platform was built and installed by American oil giant Conoco in the British sector of the North Sea in 1984. In 1994 Conoco transferred the platform and the field to the American energy company Oryx, which in turn was bought by the US company Kerr-McGee at the end of 1998.

In 2002 extraction stopped in the field, and the platform was sold for $29 million to Monitor TLP Ltd., which is registered in the tax haven of the Cayman Islands; Monitor TLP immediately resold the platform to Russia for $67 million. The shady nature of the deal prompted fears about further infringements even then.

The company that bought the platform, Sevmorneftegaz  formed in 2002 by subsidiaries of Rosneft and Gazprom  is having it repaired at the Sevmashpredpriyatie factory in Severodvinsk.

After installation, the platform itself was taken down off its supports and sent to Sevmash for reconstruction. For the Hutton platform to work in Arctic conditions, new support legs were ordered for it. The old legs were simply left in the Kola Gulf, near the village of Roslyakovo.

From 2003 to 2004, the legs were maintained by the Murmansk Basin Emergency Administration (MBASU), but at the end of 2004 the maintenance was discontinued as MBASU could not pay for maintenance for more than 6 months.

We are a state enterprise and we cannot afford such expenses, MBASU representative Mikhail Sarkov told Bellona Web. We have written letters to every executive level saying that the supports will be left untended, but this has not helped, so we were obliged to stop maintenance.

Now MBASU is suing Inflot Servis, the owner of the supports, for arrears of 7 million roubles.

Particularly worrying is that only four anchors are left of the original six tethering the supports. Murmansk Port commissioned research into the navigation and ecological safety of the legs from MBASU, which carried out an underwater investigation and concluded that the four anchors can hold the legs firm, and that the support is in a satisfactory, uncorroded condition. However, environmentalists remain concerned about the age of the construction.

It is quite likely that the platform was not cleaned before being sold to the Russian side, report author Bakharev told Bellona Web. This means that the legs could contain drilling accessories.

Bakharev added that a full assessment could be made only after an ecological expert examination had been carried out. 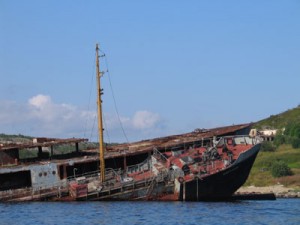 Experience has shown that after a transport vessel is written off, it can be either decommissioned or bought by another owner for further usage. But there is also a third option: If the boat is not sold, its owner, to avoid further expenditure on decommissioning, can strip out its most valuable parts―which contain valuable non-ferrous metals―and either dump the hull by the shore, or sink it.

Former boat owners, secure in a sense of their own impunity, remain unconcerned that they are breaking the law outrageously, and this leads to environmental degradation and the creation of an environmental threat in the already polluted Kola Gulf, as well as huge problems for navigation.

Residual oil products and other environmentally dangerous substances are often discovered on abandoned or sunken boats.

But the most irresponsible owners are the military. Military transport boats, once taken out of service, are not decommissioned due to a lack of money, and environmental control bodies in the Murmansk Region do not have enough high-level leverage mechanisms to affect military departments.

Experts say that more than 300 military vessels have been dumped along the Kola Peninsula shoreline over the last three years.